Treetop Protest in the Walks

A man made a tree-top protest in the Walks, King's Lynn today. Details are still sketchy, but this might be the first of the direct protests expected from now until the felling plans are changed. 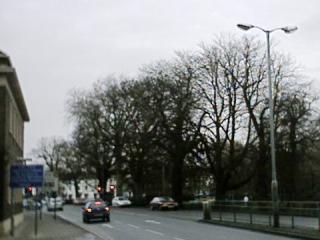 Protest location, back to normal in a few hours despite zealous traffic controls

The protest took place in St James Park, which is the formal park on the edge of the Walks, next to St James Road, the main route into town. This morning, the protestor climbed one of the trees nearest the road (pictured below), despite the 30mph winds, using ropes and harnesses. Emergency vehicles were in attendence and closed the road beneath, adding to the disruption.

When the protestor climbed down, some time after 1030, he was arrested. It's not clear what he was arrested for, when he will be or was released, and the police press office seem to be closed this afternoon. The Walks Action Group had no prior warning of the protest (else we would have been there with a camera, supporters and leaflets sooner!)

Although it was unplanned, it is expected that there will be more protests in the Walks over the coming months. While the local council continues to ignore overwhelming public opinion and fails to improve their plan, the historic tradition of protests about the Walks seems likely to continue.