Third post from one of the ISM activists gone to Palestine from London.

To see the whole text of this entry, go to

To see the whole blog, go to 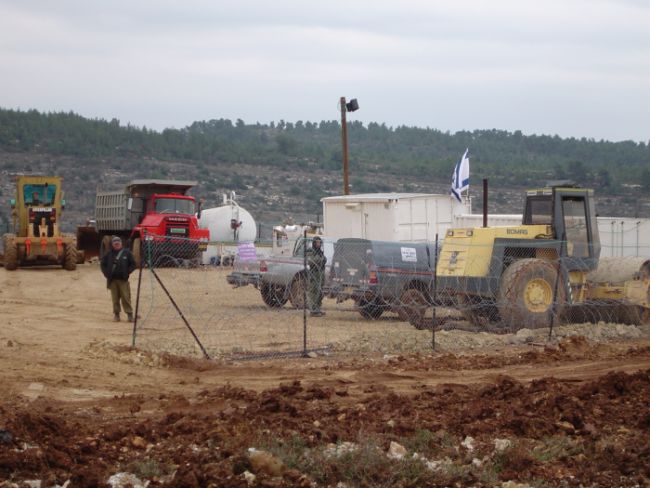 On the 7th of January an olive tree planting action was planned. Several ISM activists came to join in the event which was organised by Palestinians from the area. It was also attended by other internationals and Israelis, including a group called Rabbis for Human Rights. Popular committees are very actively resisting the Wall in this area, and have had some successes.

The night before the action there was a rally for Tayseer Khalid - the leftist DFLP’s candidate for President. His platform was more or less what you might expect - social justice, rights for women, continue the intifada (both peaceful and armed) etc. etc. At the end, he even mentioned Hugo Chavez as a good example of standing up to foreign imperialism. It was an extremely interesting experience - very unlike political rallies in the UK. It was a much freer forum, for a start. Although somewhat stage-managed, the Q&A session at the end was pretty open, with Fatah supporters present being highly critical of what they saw as the contradictions and problems in his platform. Amongst the issues debated was armed struggle, corruption in the Palestinian Authority (and Khalid’s failure to address it while he was part of the PA) and the shortcomings of the Oslo accords.

The Village Development Society for North-West Jerusalem helps farmers sell their own produce at a loss to the Society. They subsidise land, tree and equipment purchases. This is all funded by international donors, such as the MPA in Norway. The Society distributes trees to farmers according to how much land they cultivate. It also seems that there is some sort of communal ownership of land in the region.

In that area, the problems caused by the wall are not yet as severe as Jayyous because of the successful non-violent resistance there. However, there are still grave problems, with the threat of increased oppression and land confiscation. The Wall is planned there because it is a key strategic area for the Israeli state to grab. Two to two-and-a-half thousand olive trees have been destroyed in that region in order to clear the ground for the Wall. Houses have been demolished, rebuilt and destroyed again. Almost all of the six or seven thousand villagers here are farmers who depend on the olive trees for income and so have the same dire threat to their very existence hanging over their heads as in Jayyous.

It becomes clear that the gradual annexation of land to Israel via the mechanism of the Wall is very much a State project. Extremist Zionist settlers do exist and are a very real threat, but ultimately they are manipulated by the government. Also, they are not the mainstream of settlers. Settlements in the Occupied Territories are a government project. Housing subsidies and lots of other very real government incentives for the poorer classes of Israeli society encourage movement to settlements. A few of the settlers near Biddu have actually supported the people of Biddu in one of their court cases against the wall, saying that they have had no problems from them.

The Wall has nothing to do with security and everything to do with expanding Israel. In Biddu, the site currently being cleared of olive trees and homes is 6 KM away from the nearest settlement. If the Wall is really supposed to provide security to settlers, logically it would be built near the settlements. The people of the area know from the past experiences of other Palestinians that these plans mean that new settlements will soon be built in the confiscated land.

It needs to be noted that Israeli settlements in the West Bank are an illegal act of colonialism (international law forbids an occupying power from moving civilians into the occupied regions).

To make way for the planned Wall, olive groves are destroyed and turned into construction sites. The picture shows Caterpillar machines parked in a sort of building site adorned with the Israeli flag and guarded by private security -mercenaries.

The ISM activists continue to support Palestinians by participating in their actions, so far consisting of planting trees in groves where trees have been already destroyed to make room for the Wall. To read the whole blog, see:

All text and photos on this site licensed under a Creative Commons License.