Demonstrations and actions against the WEF in Switzerland

Last Saturday 15th of january 2005, the first demonstration against the World Economic Forum in Davos has taken place in Winterthur, Switzerland. About 400 people demonstrated without any conflict arising. Another 400 demonstrators voiced their resistance in Chur and Adelsberg to the forthcoming WEF proceeding from 26-30th of January. In Aarau a creative action happened, whilst in Thun a political flashmob confused passers-by, leading to a spontaneous protest. In Heiden, an attack against the UBS, a giant bank consortium, occured. In Zurich, an anti-repression group burnt down a training camp for anti-terrorist units in protest against the WEF security preperations. In Bern, the "Tour de Lorraine", educates with films, theatre and gigs.

More protests are planned during the week in Berna, Davos, Lugano and Basilea. For more up to date information see:
[AntiWEF 2005 | IMC Switzerland - links to languages ] 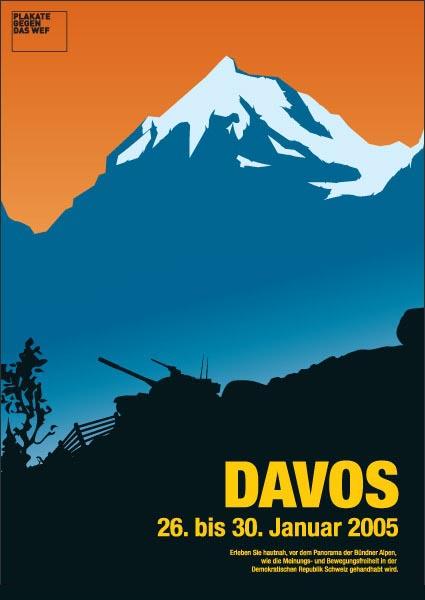 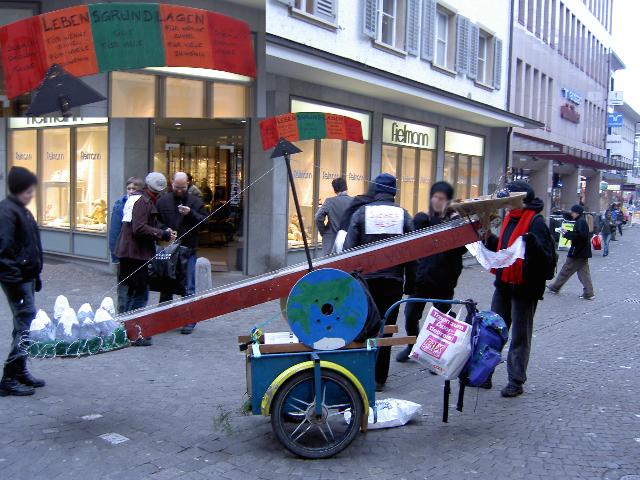 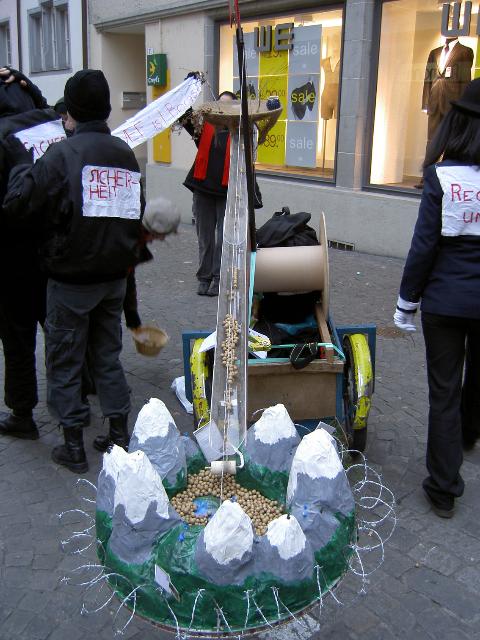 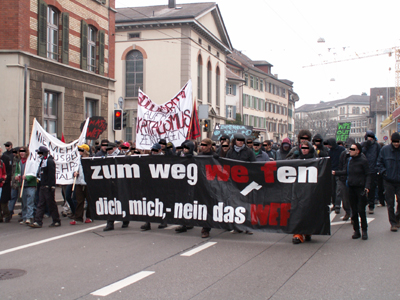 Winterthur- banner reads: "not me nor you to get rid off, but the WEF" 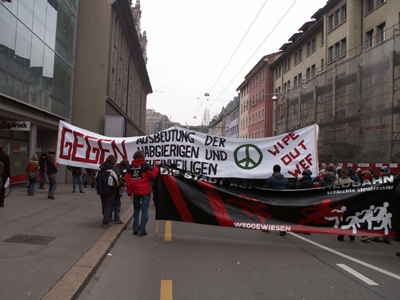 In Aarau a creative action took place in the city centre, where a huge scale symbolised the economic balance of the world. Passengers were asked to donate for the poor countries, but all donations were imediately transferred to the rich countries.

An attack against the UBS (Union Bank of Switzerland) took place in Heiden. In a declaration the activists state, that the
"UBS is the fourth biggest financial instituation in the world, the fourth biggest donor to the Bush campaign, and involved in the biggest financial scandal so far about the milk company Parmalat. UBS is also involved in businesses with corrupt governments such as in Guatemala, despite gross human rights violations. The UBS achieved in 2004 a plus of 6 billions whereas at the same time, they laid of 3100 people - 5% of the company's emploees. The president of the company however gets 18 Mio Swiss Franken yearly, that's 300 times an average workers salary."
In the declaration the protesters state that their action is symbolic, and their aim was not to inflict big property damage.

Meanwhile, although the demonstration in Winterthur was peacefull despite of neonazis provocating, the huge mass demonstration planned for the 22nd of january against the WEF, is prohibited by a court decision.

The Anti-WEF-coordination wanted to protest against social cuts, salary dumping, privatisation, instituational racism and war. The network is now calling for decentralised actions instead.

In a referendum last october 58,6% of electorates voted for the continuation of the WEF in Davos till 2009. The referendum was held as the restrictions, costs and impact of the forum on the local population increased tremendously over the last years.