calling sollidarity on deportation of refugees in Japan . 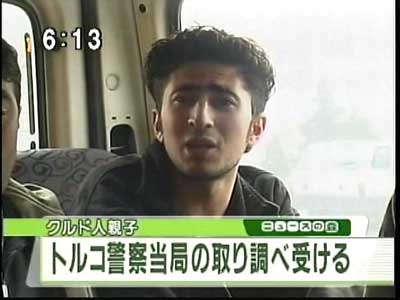 Kurds Refugees Have the Right to Live in Peace without Persecution

To those who are concerned about refugees status all over the world,

Two Kurds refugees; Ahmet Kazankiran and his son, Ramazan, were detained when
they reported to the immigration office at Shinagawa, Tokyo to have their
provisional release renewed Monday, January 17, 2005. Despite their U.N.
recognition as "mandate refugees", Japanese Justice Ministry's Immigration
Bureau deported them to Turkey next day. This is an unprecedented inhuman
treatment. Plese protest against Japanese government, embassy or its affiliated
facilities there to stop such infringement of refugees human right.

No Kurds from Turkey have been given refugee status by Japanese government so
far, while the number of people who were granted official refugee status or
special residence permits in Japan in 2003 was just 26 and may be only 16 in
2004.

Japanese immigration officials visited Turkey last spring and cooperated with
Turkish security authorities such as army and police to "examine" whether their
refugee plea was valid. The personal information of Kurds refugees stay in
Japan was leaked to secret police there, the risk of persecution, therefore,
increased if they were enforced to deport to Turkey.

Suffering persecution by Japanese government, 12 members of the Kazankirans and
the Erdal Dogans, another Kurdish asylum-seeker with Iranian refugees Jamal
Saberi staged a protest sit-in in front of United Nations University in Tokyo's
Shibuya Ward since last July 13th. The 72-days sit-in protest action, demanding
refugee status in Japan or at least to have sent them to a third country,
however, crushed by security gurds and riot police.

The office of the U.N. High Commissioner for Refugees has described the
deportation as "contrary to Japan's obligations under international law" and
said it contradicts the humanitarian aid Japan extends to refugees and disaster
survivors abroad. "This is an embarrassing incident, internationally speaking.
The Justice Ministry not only ignored the U.N., but challenged and insulted it.
"

In spite of a signatory country of the U.N. Convention Relating to the Status
of Refugees, Japan has neglected its duties to cooperate with the UNHCR by
deporting the two Kurds. Such kind of brutal action will no doubt stain Japan's
position in the international community. As a oppressing human right country,
Japan is no position to seek permanet member of the U.N. Security Council.

The remaining five member of Kazankiran's family are required to appear before
the Tokyo Immigration Bureau in Shinagawa on Monday, January 24. For them and
also the Dogans orders for deportation have also been issued. "I'm afraid that
we will all be deported just like Ahmet and Ramazan," Erdal Dogan said. "All of
our lives depend on this."