Communiqué from the Kevin McCallister Collective 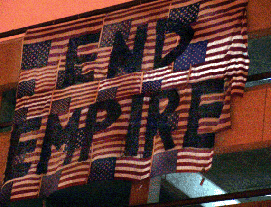 On the morning of Thursday, January 20th, the KMC dropped a large banner made of nineteen upside-down American flags with the words “END EMPIRE” painted upon it. We make this statement as an act of resistance against the largest, more dominant military empire in history. Since its inception, the United States has aggressively expanded its borders, pushing indigenous peoples off their land and destroying the sovereignty of other nation-states.

Dropping this banner on inauguration day is not strictly a protest against the Bush administration but against a system which allows for the injustices they have committed. The illegal and internationally condemned invasion of Iraq is only the most recent example of violent expansion, the logical result of power—in the red, white and blue guise of democracy— gone hopelessly awry. Thus our action is done in solidarity with all of those who struggle globally to resist concentrated power; to them we say “Ya Basta!”—“Enough!”—with the hope that we have contributed one small piece in the creation of a more humane world.

This is it; don’t get scared now.