Report from Palestine with 7 photos.

This is a 1,000 word report from Palestine by Margaret Pacetta of Glasgow with 7 photos.

Map of West Bank. (Aida is near Bethlehem.) 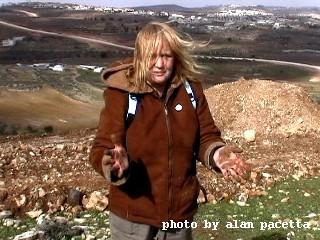 Run down area in Aida. This is a report from Palestine by Margaret Pacetta


Today’s action at the wall was pretty uneventful at first. The bulldozers were not working today so we all decided to plant olive trees instead. My son is forwarding photographs on so you will see us all freezing cold on a mountain planting trees.

It actually felt really good as we all felt it was a gesture of protest albeit it silent but we felt it very moving to participate with the Palestinians. Unfortunately we were told that we would be lucky if one of the trees survived without being bulldozed.

We were also told just before we went to the scene that at the last demonstration there were 5 deaths caused by the Israeli Military who shot tear gas into the crowd, even although the shell that was found stated clearly NOT TO BE USED ON CIVILIANS. They then started shooting live ammunition at the protestors, hence the deaths.

This apparently seems to be quite a common event at this particular village. There are 2 settlements surrounding the village and again they are simply trying to drive Palestinians out of their homes and land. I found out today that one of the ways the Israelis can take land is "If the farmer does not farm his land for 3 years then the Israelis can take the land from the farmer. They have been known to tell farmers you cannot get on to your land today, come back tomorrow, the same thing keeps being told to him then at the end of 3 years the land no longer belongs to the farmer".

On the bus going back to Jerusalem the Secret Police stopped our bus, took all our passports away to be checked. Kept us for about 45 minutes then detained one of the ISM organisers and told us they were merely taking him to Jerusalem Police Station to check his passport. We asked "How do we know who you are, you have no uniform?" His reply was "We have guns". I replied to him that "You are not the only Israeli to carry a gun, ordinary civilians have guns around here". He just walked away at that.

We have since found out that the ISMer has actually been taken directly to the airport for deportation. He is resisting the Deportation Order and ISMs lawyers are now looking at his case. So things feel a bit flat here at present.

We have been requested to go to Nablus tomorrow, a village outside is expecting military activities at a demo that has been planned and the Palestinians urgently want Internationals there. So I will be going to that during the day and back to Hebron tomorrow night. At least I can have another shower here in Jerusalem, something I cannot get in Hebron.

Heaven help the person sitting next to me on the plane home. This will be my last chance of having a shower.

I had a big bag full of Palestinian items to send back home. They were simply in a black bag. Nobody told me here that you cannot walk when a light is at red at the traffic lights, even although the road is clear. So there I am walking up the Israeli Quarter of Jerusalem to the Post Office clutching my black bag, when I hear a police siren behind me and shouting. I turned to find them signalling me to go over. They explained I had broke the law. I tried to laugh the situation off by apologising and saying that in Scotland we crossed simply if the road was clear, and all the time I kept thinking, “ PLEASE, PLEASE DO NOT LOOK IN MY BAG." I know I am paranoid, but everyone keeps telling me they will take any Palestinian items from you.

With a sigh of relief I walked off to the Post Office thinking, fantastic I shall send these off now, only to be waved over by a security guard who stands at the door of the Post Office. He had a right good look at them, smiled and just waved me on to join the queue. My nerves are shattered here.

Forgot to mention at the last demo, the Police actually detained a 14-year-old youth who had been throwing stones at their Jeep. The Police actually tied this boy to the front of the Jeep to use as a human shield. The Rabbi went forward to complain about the treatment of the boy and the soldiers kicked the Rabbi to the ground and arrested him also.

So daily life in Palestine. Two of the people who were at the training with me stayed at a Palestinians home near Jenin as they were frightened the soldiers would come during the night. The soldiers did come and put the family and the 2 ISMers into a room and kept them there for 30 minutes. There are simply not enough of us out here at present.

When the Secret Police stopped the bus you could cut the atmosphere with a knife. The Soldier kept demanding where we were staying, where we had been and where we came from? So I suggested we start singing "The back of the bus, it cannot sing, cannot sing, cannot sing". The Policeman just glared at me. Then we were silent again. I thought I am not going to let him intimidate us, so again I turned and said, "This is the last holiday I am having here, next year is definitely Magalluf". So the entire bus was in stitches with laughter, but unfortunately the policeman had no sense of humour, and told us to be quiet. I off course obeyed; after all he had a gun. I just had a big mouth.

Well take care everyone and hope this finds everyone well.

PS Sorry about darting back and forward about events, but after you type something you remember something else that happened earlier.