Ordeal of a Gay Asylum Seeker

Ramzi Isalam tells how he escaped murder by Islamic fundamentalists in Algeria, and is battling against the Home Office to win asylum in Britain 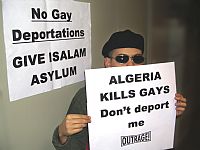 Ordeal of a Gay Asylum Seeker

Being gay in Algeria is a nightmare. I was raped by a soldier. Then beaten and threatened with death by Islamic fundamentalists. Two of my gay friends were murdered by the Islamists.

Gay sex is illegal in Algeria; punishable by two years imprisonment. I now face up to five years jail for evading the draft. I refused military service because gay recruits often get queer-bashed and gang-banged. In Algerian civilian and military prisons, homophobic torture and rape are commonplace. I don’t want to suffer that fate.

When I fled to Britain and claimed asylum, the Home Office admitted I could be jailed for a period of three months to five years for draft evasion. It also conceded: “In Algeria homosexuality is illegal and attitudes to homosexuality are not enlightened. It is therefore likely that homosexuals suffer discrimination, and on occasions are subjected to physical and verbal abuse by non-state agents as a result of their sexual orientation.”

It shocked me when the Home Office nevertheless concluded “you have not established a well-founded fear of persecution and you do not qualify for asylum.”

I could now face deportation to Algeria. I live every day fearing arrest and forcible repatriation. If I was sent back, I could be jailed and tortured by the Algerian government – or be hunted down and murdered by homophobic Islamists.

My struggle for freedom as a Muslim gay man began a long time ago. In February 1994, at the beach, one of my gay friends was shot dead by Islamic fundamentalists of the Groupe Islamique Arme (GIA).

In May 1996, the GIA bombed my street. Many people were killed. I was cut by flying glass. Our house was destroyed. I lost everything.

At the time, one of my gay friends, a neighbour, was snatched from his house by the GIA. We never saw him again. Local people praised the fundamentalists for ”purifying” society and getting rid of “rubbish and perversion”. This made me realize that, as a gay man, I was someone whose existence was rejected. It is a horrible feeling to live in a society where you have no place and where people like you are being killed without arousing any sympathy within your community.

Three years later, the GIA posted notices around my area, saying homosexuals would be killed. In 2000, many gay friends left Algeria, as they feared for their safety. This made me very scared. I, too, began to think of leaving.

The following year, I witnessed the stoning of two young men suspected of being gay. A neighbour started to beat them, and other neighbours joined in, pelting them with stones. One of the men was bleeding very badly. I was very disturbed by this incident, as I knew it could easily have been me.

In February 2002 I heard about the police raiding a private gay party, after a neighbour’s complaint. All the gays were arrested. Two were raped while in police custody. The others were severely beaten.

Later that year, I resumed a secret relationship with an ex-boyfriend. Since we lived with our families, the only place we could have sex was on a nearby building site. One night, we were discovered by a GIA terrorist. He produced a gun and threatened me, saying you “sexual deviants” should be killed. I ran off. Luckily, I was near a police station; otherwise he probably would have shot me. But I could not go to the police because, as a gay man, the police do not protect “sodomites”.

Later, three men came looking for me at my house. They searched all the rooms. From my brother’s description, one was probably the GIA terrorist who threatened to kill me.

I realised I was in serious danger from the Islamists. I also knew my military exemption was due to expire, and I would be forced to join the army, where gay conscripts suffer violent and sexual abuse.

In January 2003 the Military Police came to my house. They told my father I had to go to their headquarters, collect my papers, and join the army. I knew I had to leave Algeria immediately.

I heard Algerians were being granted asylum in Britain. So I flew to Heathrow on the 9 February 2003 and applied for asylum. I thought I would be greeted with sympathy and understanding. Instead, I was fingerprinted and photographed, like a common criminal. Since then, the Home Office has twice turned down my asylum claim. I feel betrayed and fearful.

Nevertheless, I am also enjoying the pleasure and relief of living openly as a gay man. For the first time in my life I have gained self-confidence and self esteem. This would have been impossible if I had remained in Algeria. There are no gay organisations or support groups. Gay people have no protection from arrest, torture and murder. I cannot believe a Labour Home Secretary expects me to give up my new-found freedom and to return to the homophobic hell of Algeria.