The G8 Justice and Home Affairs ministers are having a mini-summit in Sheffield, June 15th - 18th. Here's just some reasons why noise needs to be made. Come to the Sheffield Social Forum open meeting, Thurs Feb 17, if you want to do something / more info soon... 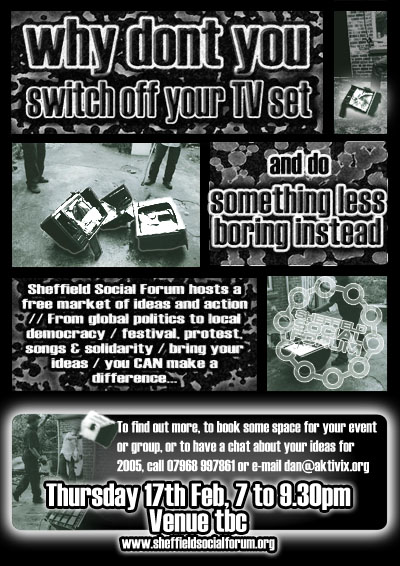 George Churchill-Coleman, who headed Scotland Yard's anti-terrorist squad as they worked to counter the IRA during their mainland attacks in the late 1980s and early 1990s, sez:

"I have serious worries and concerns about these ideas on both ethical and practical terms. You cannot lock people up just because someone says they are terrorists. Internment didn't work in Northern Ireland, it won't work now. You need evidence."

"My first responsibility is to protect people. I don't regard their rights as absolute. There are serious people and serious organisations trying to destroy our society. We are in a state of emergency."

"I pay great attention to the civil liberties of the country. But on the other hand, it is also right that there is a new form of global terrorism in our country, in every other European country and most countries around the world."

“Why... of course the people dont want war. Why should some poor slob on a farm want to risk his life in a war, when the best he can get out of it is to come back to his farm in one piece. Naturally the common people dont want war; neither in Russia, nor in England, nor for that matter in Germany, that is understood

"But, after all, it is the leaders of the country who determine the policy, and it is always a simple matter to drag the people along; whether it is a democracy, or a fascist dictatorship, a parliament, or a communist dictatorship.

"Voice or no voice, the people can always be brought to the bidding of the leaders, that is easy. All you have to do is tell them that they're being attacked, and denounce the peacemakers for lack of patriotism and exposing the country to danger, it works the same in any country.”

(from the Nuremburg Trials)