G8 in the News

Today the forthcoming G8 summit in gleneagles is in the news again. The Edinburgh Evening news published pictures of riots and stone-throwing, windowsmashing protesters, whileas on the radio it was stressed, that there "would be a permanent security cordon around the Scottish parliament and Holyrood Palace",
as well as 200 000 protesters expected. It was mentioned that the security forces now make preperations to draft in English police forces to Scotland, too. 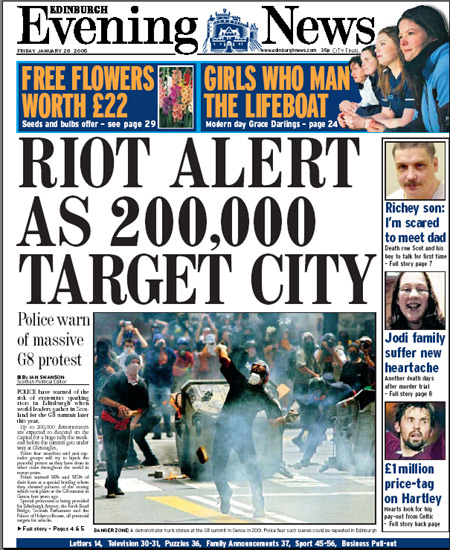 The full texts will be posted as soon as possible. In the text the route for the deomnstration on the 2nd of july by the "Make poverty history" coalition is published, it is the usual route frow the Meadows to the Meadows via Princes Street. Also the "Wombles" are mentioned, as well as that the security forces are concerned by their possible appearance. In the article the attempts are made to stir up the more reactionary charitable and NGO s against the more radical protesters, and it is suggested that "Edinburgh is put on riot alert" as there are fears of broken shop and bank windows.

Full article to follow, as it doesn't seem to be this one.
URL: