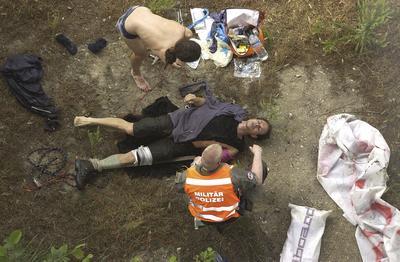 Court accepts activists’ appeal.
Police will be sent to court for bodily harm through negligence

The Aubonne-Bridge Action against the G8 in 2003, in which two activists, Martin Shaw and Gesine Wenzel, nearly lost their lives as the police cut their climbing rope, has entered an exciting new phase. The High Court has accepted their appeal and overturned the decision of the examining magistrate Jacques Antenen. He had previously ruled that the police were not to be charged declaring that the incident was produced by the activists’ own temerity. The Tribunal d’accusation du Canton de Vaud has now announced that “the investigation has already produced enough evidence to justify that Michael Deiss and Claude Poget will be sent to trial under the accusation of simple and severe bodily harm with negligence.“ Until now the criminal investigation has only been carried out against M. Deiss, the policeman from Schaffhousen, Switzerland, who cut the rope. Now the Court has acknowledged the activists’ complaint and declared that Claude Poget, the highest ranking officer on the bridge “should have been interviewed as accused.”

The activists remain skeptical. “While we are very happy about this decision, we have deep concerns that the judicial system really wants to find out the truth.” said Martin Shaw. “They work on the pure assumption that no orders have been given although the phone calls between the Poget and Christian Flueli, his senior officer in the control center have never been examined. This is an obvious step which we have been asking for since the incident happened.” The Court considers that the investigation supplements that the activists requested in their appeal are not necessary. Gesine Wenzel says “There is a definite refusal to find out about the implications of the hierarchy. They aim to consider the two accused policemen as the black sheep and the incident as an accident. But if one really wants to avoid such dramas, the entire system of police intervention and internal organization has to be looked at.”

Of this opinion is also the local parliamentarian Yvan Rytz who handed in a parliamentary question to the government of the Canton de Vaud. He states: “The government can’t ignore their responsibility in this affair. The highest ranking officer on the bridge, a policeman from the Canton de Vaud, did not follow official orders and it’s the governments’ responsibility to react on those failures. They also need to inform us which training the police have received concerning different types of protest actions. For us it is clear that Shaw and Wenzel have suffered enormously due to the actions of our policemen and should be compensated.”
29 parliamentarians from different parties are openly supporting these concerns.

The climbers who have suffered severe physical and emotional injuries have received no compensation, whilst considerable amounts have been awarded to shop-owners whose windows were destroyed during the protests. “This shows how the state protects property over people's lives”, concluded the activists. “The decision of tribunal is a first step. But it is important to remember that this is absolutely exceptional and that most complaints about police violence remain uninvestigated and never lead to prosecution.”

aubonne@no-log.org
text of the parliamentary question: