Nepal: All communication links were cut after the King Gyanendra's announcement of suspending parliament and fundamental rights, on Tuesday, 1st of february.
Airlinks have been closed, roads blocked, other transport links delayed. Armed security forces in riot gear are deployed. Leaders of major political parties, trade unions and student organisations are under house arrest or detained. Army is stationed in the editorial offices of all national dailies in order to censor. Outside of Kathmandu, the Maoist strike is apparently observed.

A student demonstration at Prithvi Narayan Campus in Pokhara was fired on by a military helicopter gunship leaving several protestors badly injured if not dead; all FM radio broadcasts outside of Kathmandu are blocked and those broadcasting in Kathmandu play only entertainment-oriented programmes; the BBC FM station recently established in Kathmandu is forbidden from broadcasting the news in Nepali; news stands outside of the Valley have been closed; and a 72-hour blockade on long-distance public bus travel in and out of Kathmandu is in place. 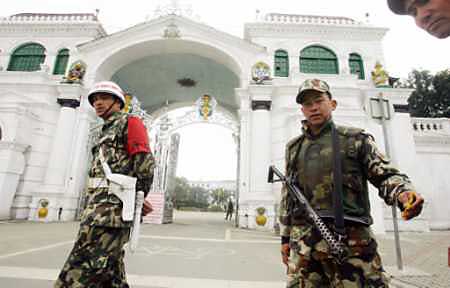