The day in the basque country

Today we are suffering a new great attack from the spanish and french states. 42 youths are being judged because belong to basque youth organisation Segi. The spanish state asks an overall punishment of 642 prision years for all of them (from 10 years to 112). They, too, arrests today two monks and another youth 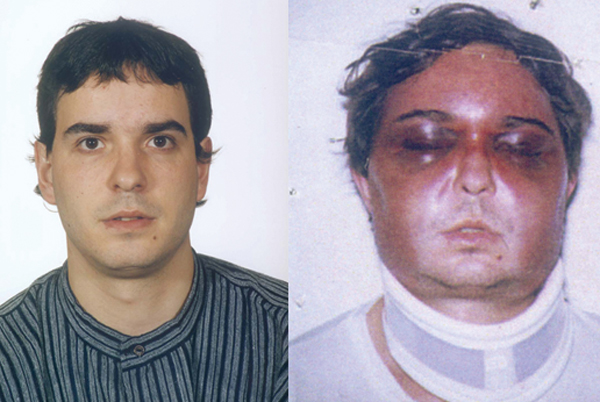 Unai Romano, before and after be tortured for the spanish police

It be being a difficult day for the basque country. Today the spanish and french states are showing how they want to "solve" the basque conflict. Several and differents attacks are being done from different police corps.

At the same time, France is ready to give Araitz Zubimendi to the spanish polices. Consequently, Zubimendi is under the danger of be tortured.

But it isn't all.

The last wednesday they arrest 14 youths in all the basque country and they say they are militants of ETA. Now, they all are incomunicated (they can't speak nor with their lawyer, neither with any people, except the police officers). They all are under the danger of be tortured. Today, the spanish police arrested another youth called Unai Lizaso in Gipuzkoa.

But it isn't all.

The spanish and french polices have arrested two friars in Gipuzkoa (Spanish state) and Lapurdi (French state). The first has 75 years old and the second, 70.

I know my english is very poor, but we need that what happens hear will be listened all around the world. The photography that I adjunt, proves the torture we are suffereing. The photo of the right is the same boy, after be arrested by the police, and after be tortured.

Up the social and national freedom for the peoples!