The local Palestinian community of Hebron, attempt to protest against construction plans for an illegal settler road which would destroy part of their ancient grave yard, but are prevented from even gathering to protest by IOF and Border Police. One Grandfather was arrested as he prayed for his land. 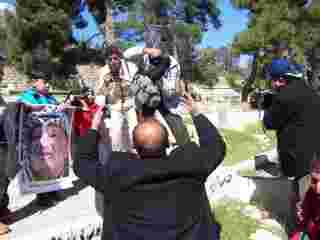 Grnadfather Prays for the sanctity of his land

Ten o'clock Tuesday morning on the 15th of February 2005, a demonstration organized by the Hebron Popular Committee, the Hebron Rehabilitation committee, the Ministry of Religions along with volunteers from the International Solidarity Movement (ISM) joined with the local Palestinian community to protest against the construction of the new settler bypass road. The proposed road will join the Beit Hadassah and Tel Rumeida settlements both of which occupy Hebron old city and are illegal under international law.
It is a bright spring morning and around twenty Palestinian men aged between six and sixty have gathered near the site of the proposed road. Media crews photograph and film the men standing in line proudly holding their hand written banners. The youngest members present, two small boys of around six struggle to display large Arafat posters almost bigger then themselves. Already the IDF and Border police are making their presence felt pressing in close around the small crowd, and pronounce the protest banned. Then comes the repeated announcements from the border police jeep, also prohibiting the demonstration.
The conversation between the protestors and police becomes increasingly impassioned as an older man demands the right to protect his heritage.
Finally he leads the crowd into the ancient Palestinian grave yard (Maqbra) part of which will be destroyed by the roads construction. The two small boys clamber over the grave stones nearly tripping over their posters as they struggle to keep up with their father who calls back to the crowd following behind.
"Hurry! Hurry! Hurry!"
The internationals enter the Maqbra surrounded by the army and border police. The soldiers quickly take up positions amongst the trees with their M16 s pointed.
The older man falls to the ground on his grandfather's grave and begins a passionate, plea to Allah his hands raised to heaven.
The cameras rush to film his prayers as the border police seize him and drag him off bumping him over the grave stones.
The police then shove the remaining protestors out of the grave yard pushing some to the ground declaring it a closed military zone. Two ISMers demand to see the papers stating the area has been militarily closed. The police continue to be rude and abusive but eventually produce a tattered photocopy of the documents requested as required to do by Israeli law.
"Why did you arrest a man for praying?" asks one ISM woman repeatedly.
"We do not need to speak to these people lets go" says the head policeman, then, "You have two minutes to get out of the area, or we will arrest you all!"
"Go or we will shoot you all!" says another cop to the Palestinians.
One Hebron man calls out to the soldiers "Shoot me! Shoot me! I have only one life and I am not afraid of you, you Israeli army!"
A desperate one man protest left standing before the impervious military as the remaining Palestinians decide that it is time to leave. The now depleted crowd toils uphill leaving the sullen gun laden soldiers glaring at school children on their way home for lunch.
Out of nowhere a battered bus pulls up and everyone jumps on and are driven away from this 'closed military zone' the graveyard of Hebron old city, the final resting place for generations of Palestinians.

This demonstration occurred at a critical time for the Palestinian residents of the Hebron. Just one day previously, a 15-year-old boy from the Al-Rojoob family was shot dead by the Israeli occupation forces outside the Ibrahimi Mosque. Eyewitnesses say the shooting was unprovoked.

Even after the so-called peace talks of Sharm El-Sheikh, land confiscations are continuing at an alarming rate throughout the southern West Bank. ISM has been involved in numerous demonstrations against the apartheid wall and settler roads over the last few weeks.