To commemorate the second anniversary of the biggest public demonstration ever held in British History, and to highlight that the occupation of Iraq still drags on, several dozen activists assembled in Cambridge Market Square for about two hours this afternoon. 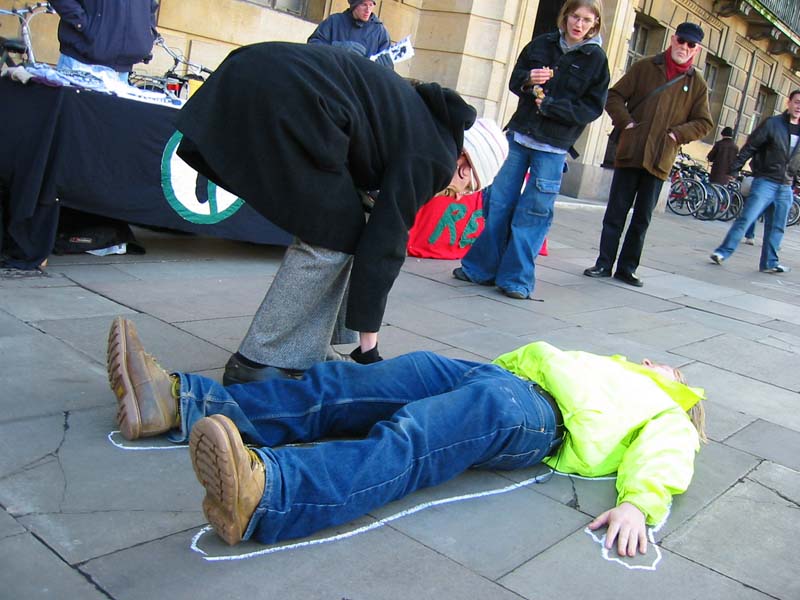 Many passers by and activists... 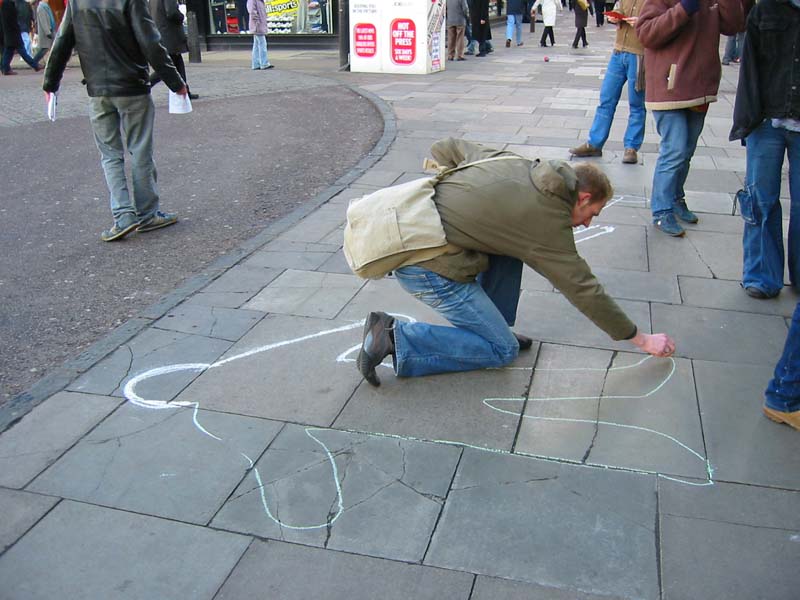 ...drew body outlines on the pavement to represent... 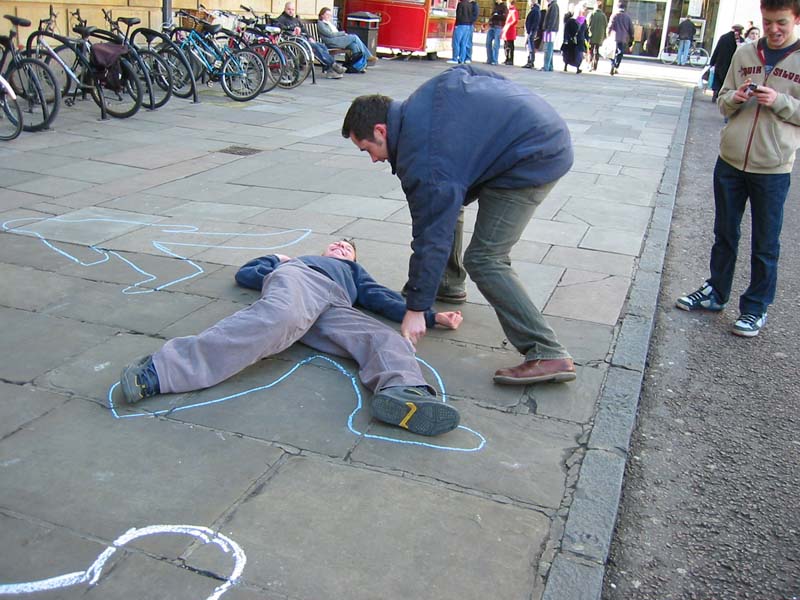 ...the thousands of innocent victims this unjust war has claimed. 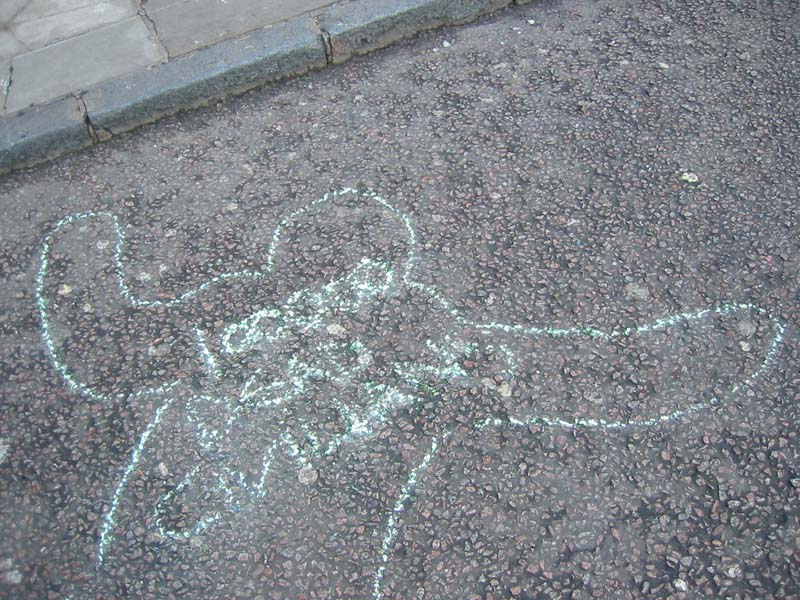 A little known fact is that Cambridge... 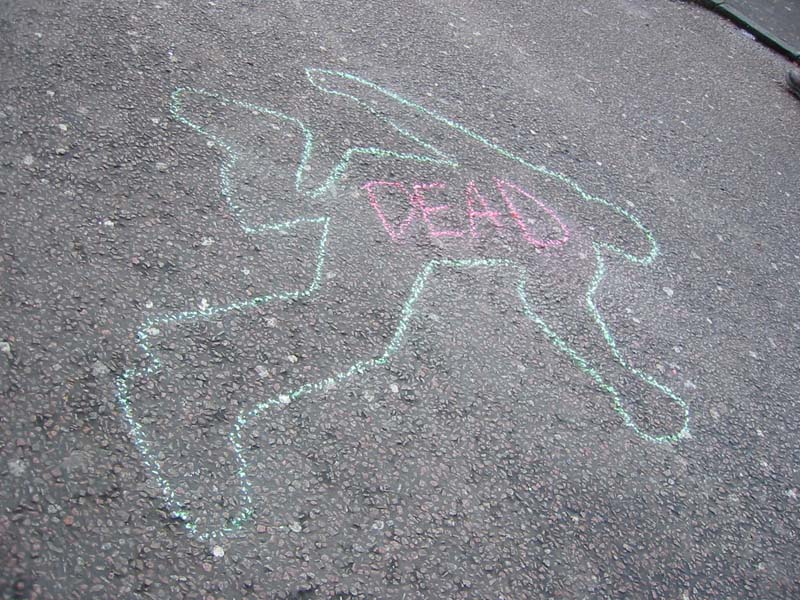 ...is the murder capital of East Anglia! 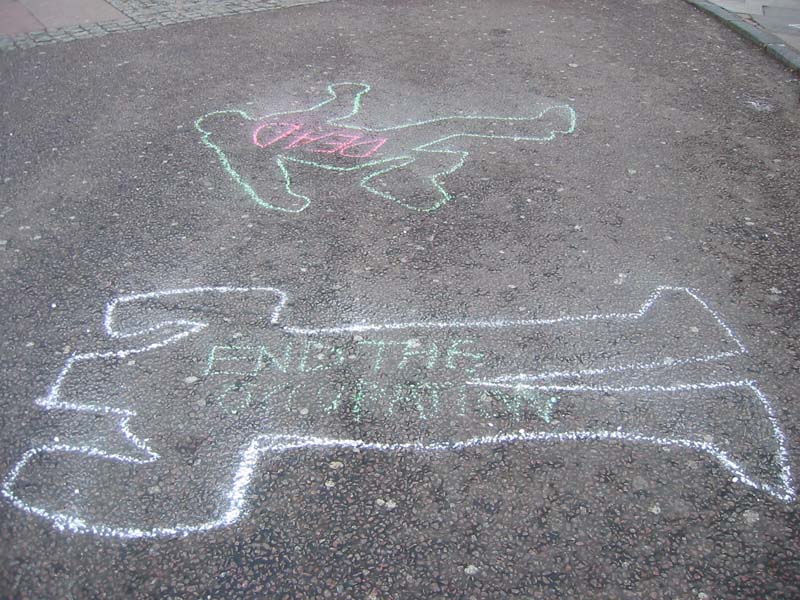 But seriously! The visual impact of all these ghostly outlines... 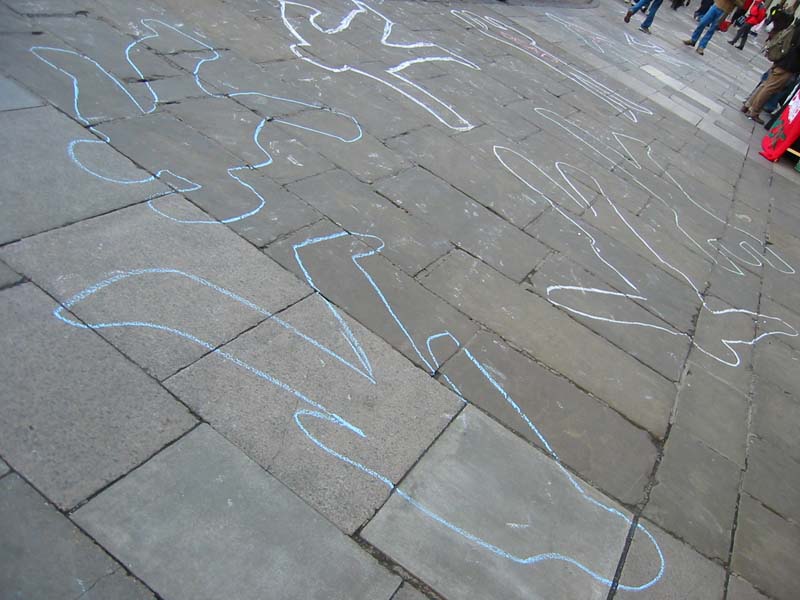 ...was very moving and poignant. 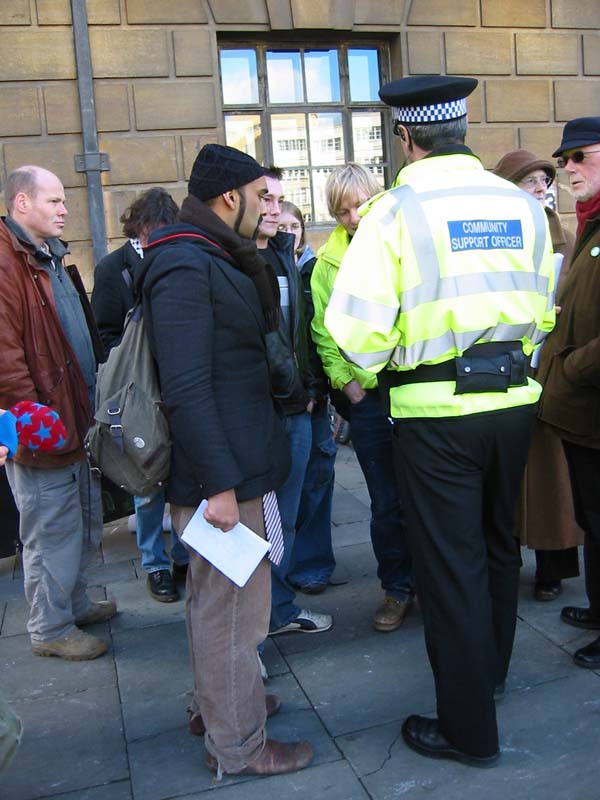 Then this upstanding member of the community arrives. 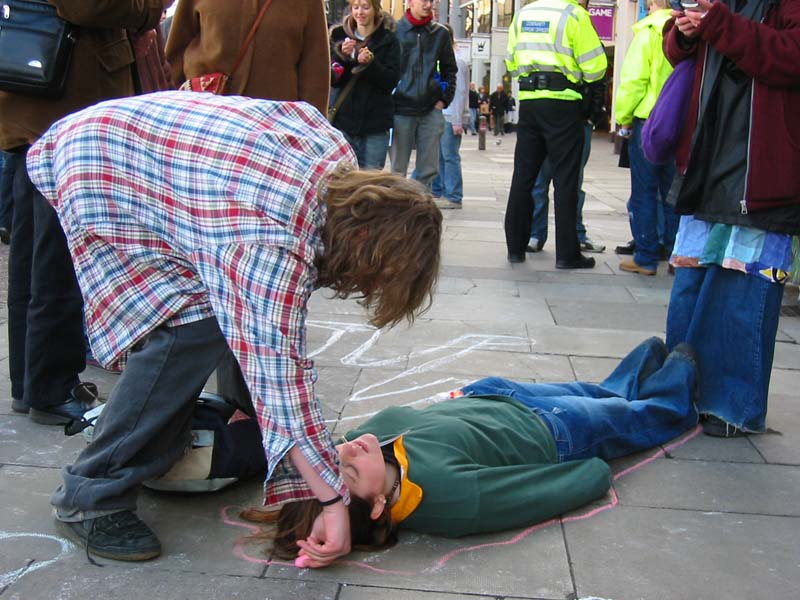 They're behind you, guvnor! 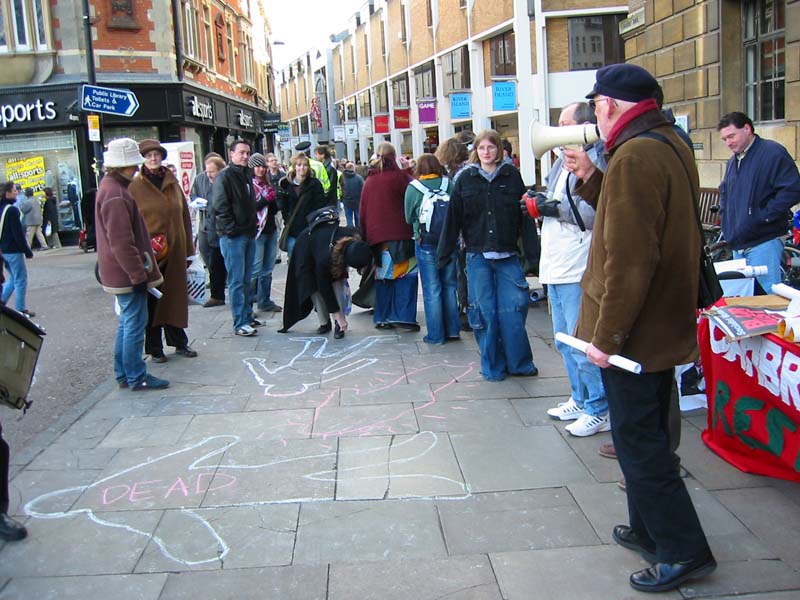 The unwelcome guest was opportune time to comment on civil liberties. 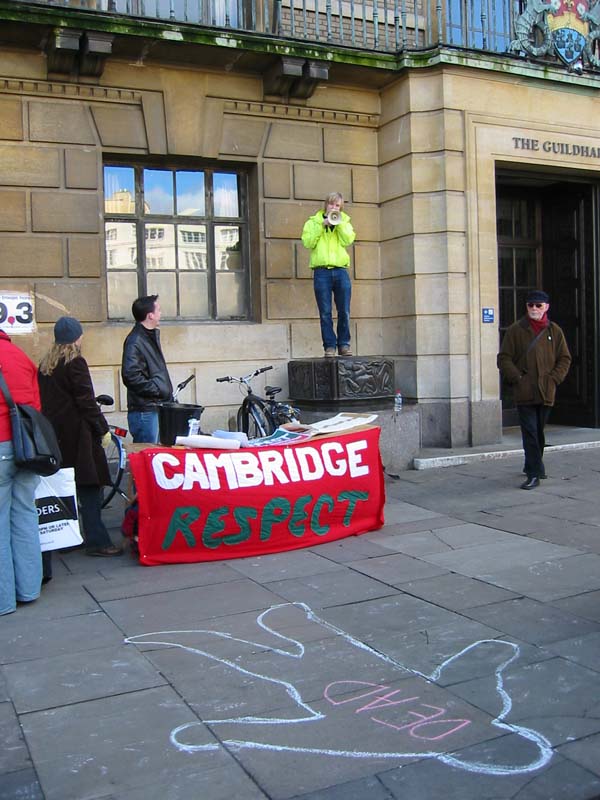 Earlier moments of free speech, both saying end the occupation... 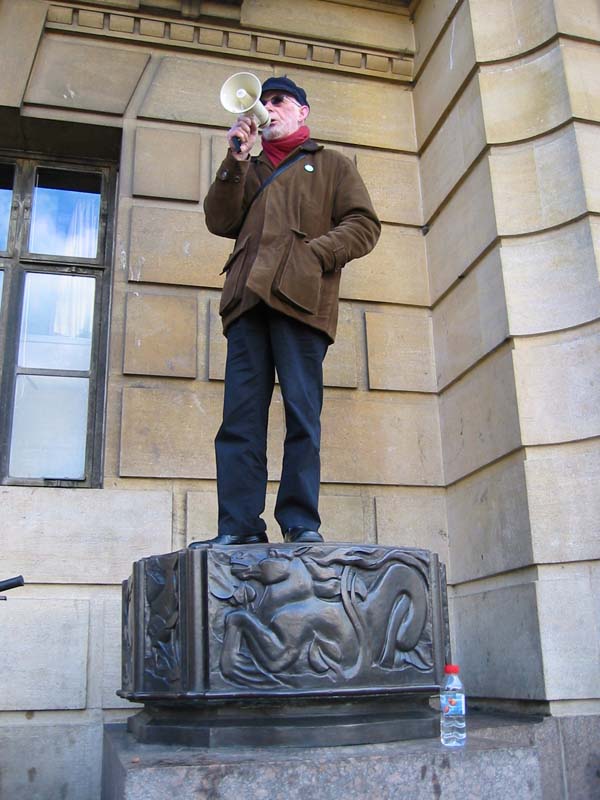 ...and that we need regime change a bit closer to home. 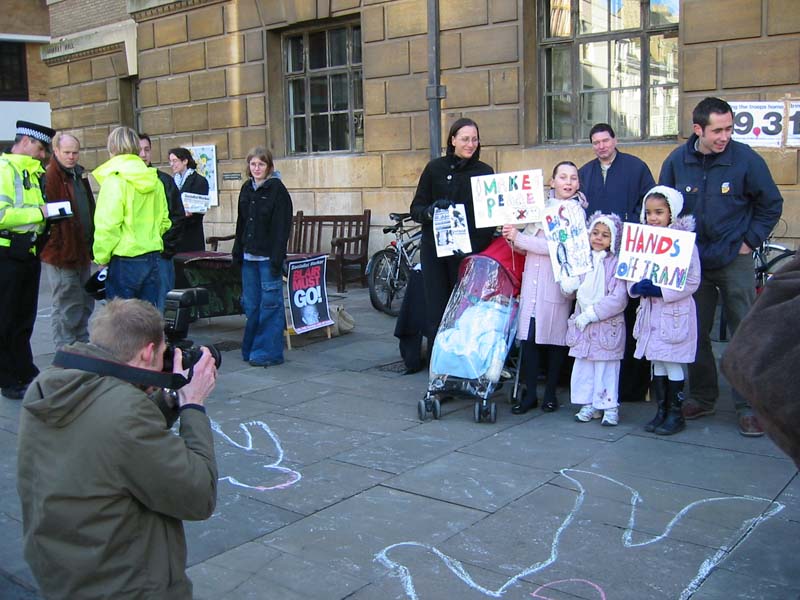 Gather round for the press, kiddie winkies! 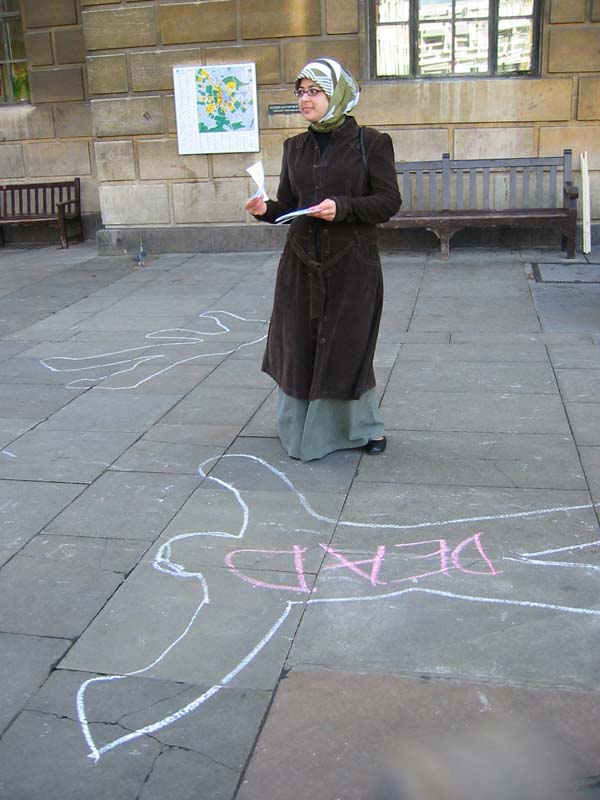 Handing out flyers, outlining the issues - the OTHER press..? 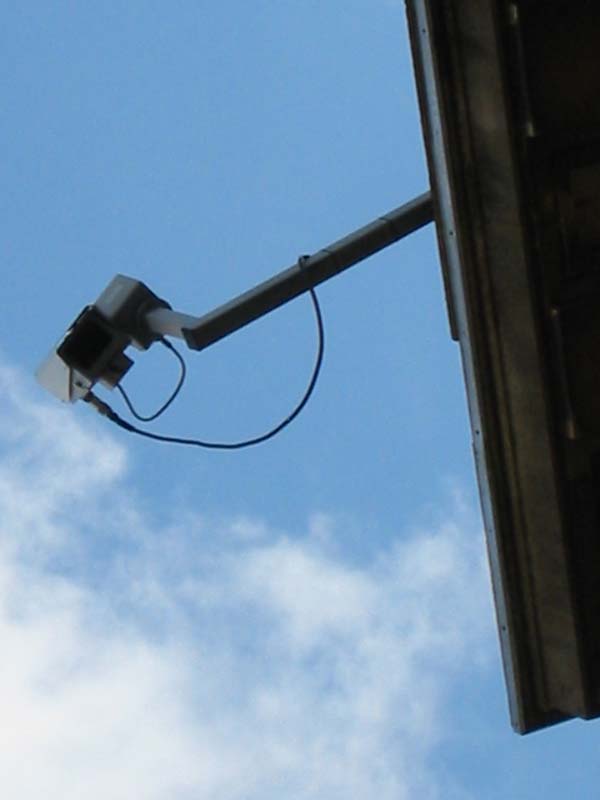 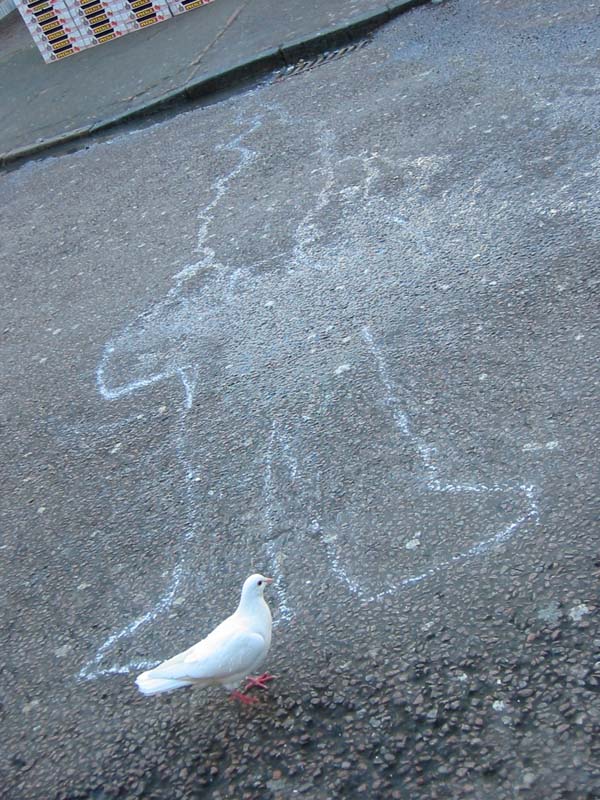 The most visually arresting part of this activity was when many people started drawing body outlines on the road and pavement, to symbolise the thousands of innocent civilian casualties this illegal war has claimed.

This attracted the attention of a 'passing' Community Support Officer(!?), who stopped to remind everyone that it's still illegal (and therefore deemed to be a 'public nuisance') to draw on Pavements and Roads. Meanwhile, right behind said officer, schoolkids carried on drawing new outlines!

Also while this was going on, another activist decided to use this as an opportunity to remind the public that this is what we can ALL expect in the climate of forthcoming obsessive 'anti-terror' and I.D.Card legislation.

It should be pointed out at this stage that it's quite a public nuisance for Iraqis to have their country occupied by foreign troops, whilst said occupiers insist on staging farcical 'elections' that only a few people dare turn up to vote in, due to the fact that the whole country is still a warzone!

The activists' public disclaimer with regards the drawings was that they washed off the (non-destructive) chalk outlines with buckets of water before leaving.

Also, a press photographer turned up and did the usual 'nice shot with cute kids' pose for their paper.

All this garnered a lot of interest and participation from many passers by, so, even it wasn't quite shutting down the town (like the now infamous Day X did), the message was still put out loud and clear that there are still many who don't believe the hype, and many who still think wars for Oil are a bad idea.

Also, don't forget that there will be a big PUBLIC DEMO in London on MARCH 19th.

If you care, be there.