"The best way we can support our troops is to bring them home, out of harm's way" - Lord Stoddard of Swindon.

At lunchtime today, anti-war campaigners in Swindon marked the second anniversary of the largest anti-war demonstration in living memory, by holding a ceremony at which the names of soldiers who had died in Iraq were read out. 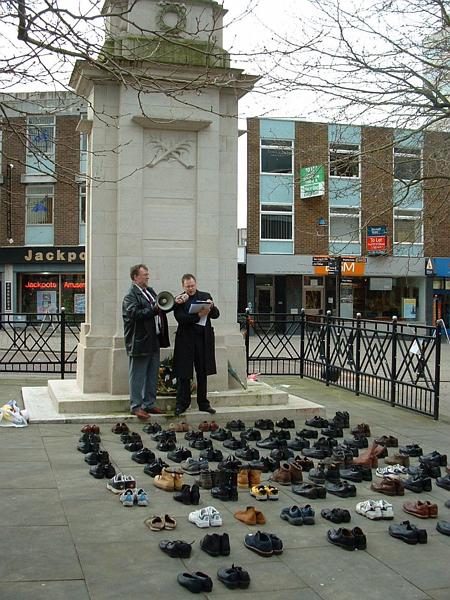 A pair of boots for each dead UK soldier 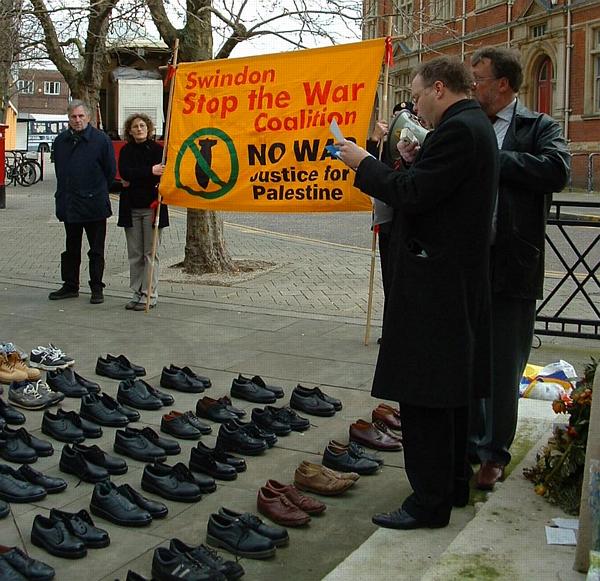 "They died that we might live" reads the inscription on the Cenotaph, a monument erected in memory of soldiers who died in the first and second world wars.

In the case of those being remembered at this ceremony, the phrase "they died that the greedy might plunder" would have been more appropriate. If only Blair and Bush had paid attention to that massive outburst of public opinion two years ago, those soldiers would still be alive today.

At a dignified ceremony, the names were read out, of all eighty-five British soldiers who have lost their lives so far as a result of the illegal invasion and occupation of Iraq, and a pair of empty boots for each one was laid in front of the Cenotaph. Included in those 85 were two from Swindon who were on board the Hercules aircraft which crashed on 30th January: Gary Nicholson from Stratton St Margaret and Mark Gibson from Sparcells.

The names of soldiers from other countries who had fallen victim to the war since May 2004, were also read out - this took most of the hour allotted for the ceremony, but still only amounted to about one quarter of them.

The names of Iraqi victims of the war were not read out. This would have been difficult to do, for two reasons:

1) There is no definitive record of Iraqi deaths because the occupation forces refuse to count them.
2) Even if all their names were known, and were read at the same rate 24 hours a day, it would have taken the best part of two weeks to read them all (based on the Lancet's estimate of 100,000 -

Quite a few passers-by stopped to watch and listen, most maintaining a respectful silence, and some taking a quick photo of the scene on their mobile phones. One or two idiots shouted abuse on their way past, but they were ignored.

A photographer and a journalist from the Evening Advertiser turned up, and rather than take their photos and vanish like normal, they stayed from beginning to end, and conducted a few interviews after the ceremony.


A new campaign has been launched, calling for the government to hold a comprehensive and independent inquiry into the number of Iraqis killed or injured by the war -

Iraq Body Count, who use a different method to the statistical method employed by the Lancet's report, instead tallying up individual reports, are now reporting between 15941 and 18200 civillian deaths. This is likely to be an underestimate, because due to the situation on the ground it is unlikely that every death is reported and included in this total.

Summaries and breakdowns of deaths and casualties of US and coalition soldiers and contractors in Iraq, and related news, can be found at


The next organising meeting of Swindon Stop the War Coalition is on Tuesday 1st March, 7:30pm at the Friends Meeting House, Eastcott Hill. Everyone who opposes the so-called "war on terror" is welcome to help move the campaign forward.

The next national demonstration (and probably the last one before the general election) is on 19th March, marking the second anniversary of the illegal invasion of Iraq. Coach transport leaves Regents Circus college, Swindon at 10am. Tickets are £12 waged / £6 unwaged. Ring Swindon 612409 to book your place. See

http://www.stopwar.org.uk/new/events/national/19mar05/coaches.htm for details of transport from elsewhere in the country.


Now get off the internet, I'll see you on the streets!