This is a 1,000 word report with photos of the day of civil disobedience in Glasgow on Tuesday 15th February 2005. 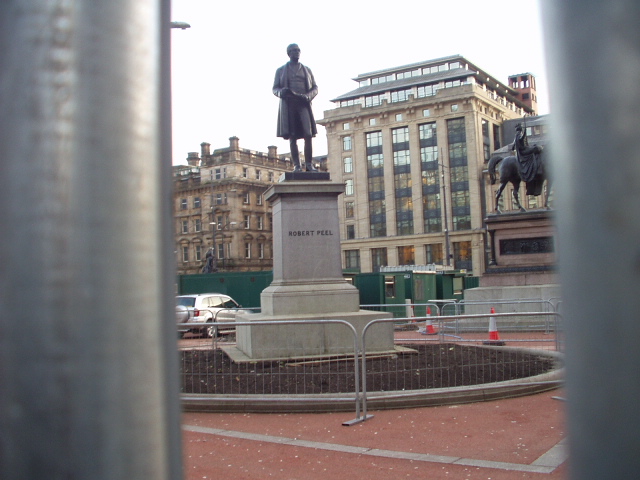 George Square being refurbished. Statues are of Robert Peel and Prince Albert. 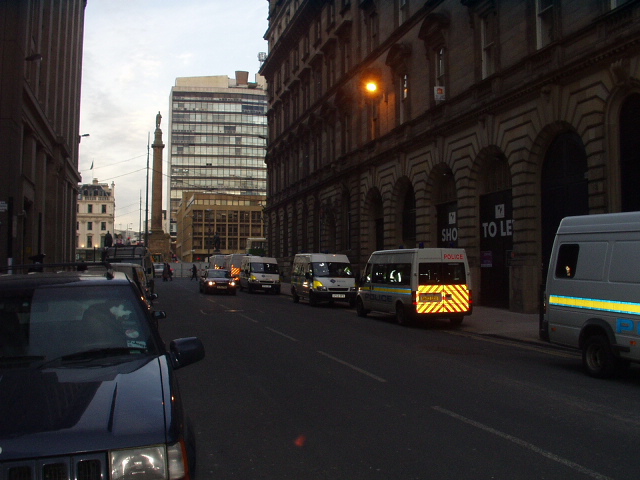 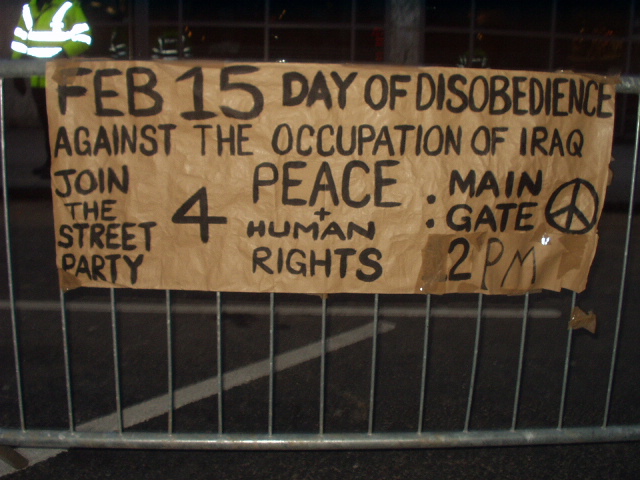 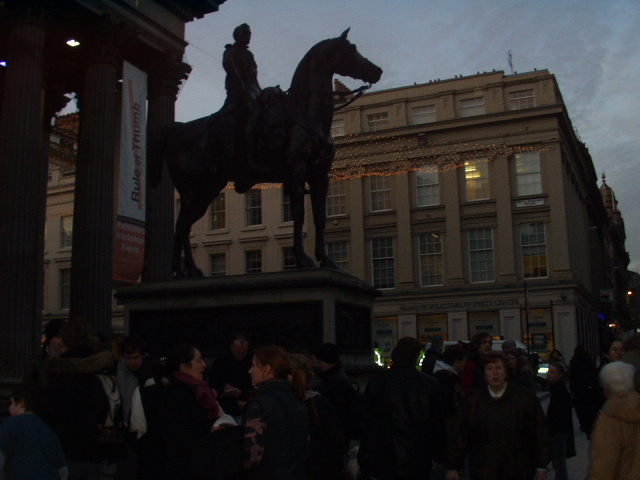 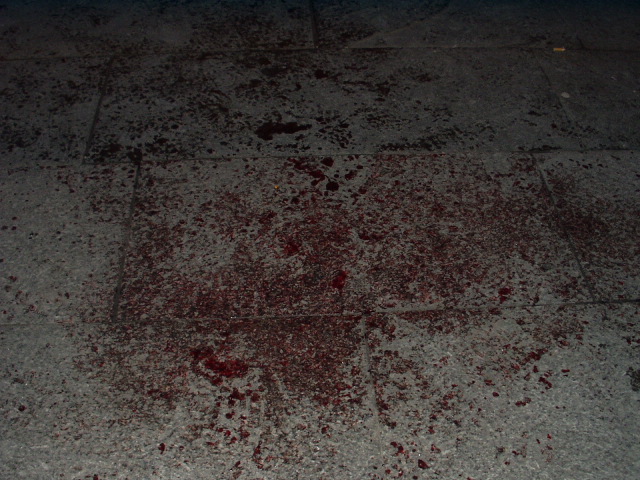 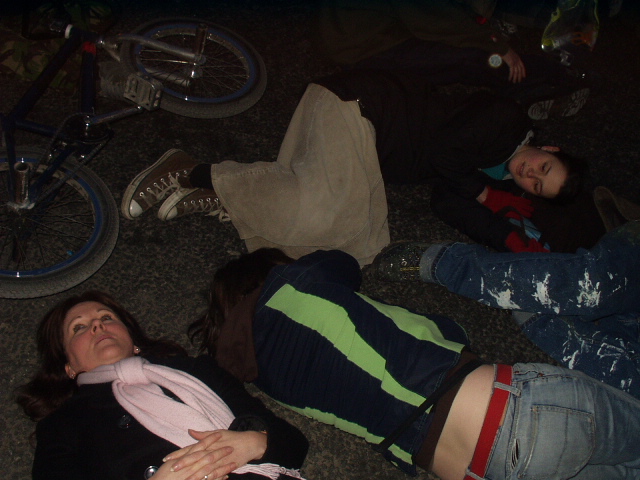 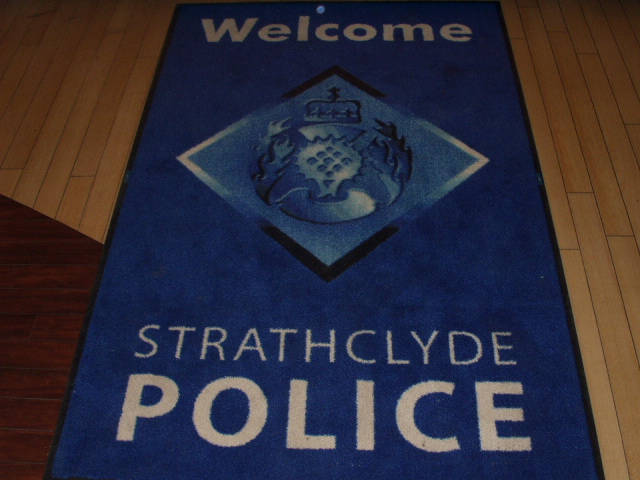 Strathclyde police roll out the red (er, blue) carpet for the two arrested!

The second anniversary of the mass demonstrations of the global anti-war protests of 2003 saw a day of civil disobedience in Glasgow. There was mass leafleting outside the Army recruitment centre in Queen Street which in fact was closed all day. This closure was seen by many of the protesters as a sign of victory. The protest was called by Southside against the war, Dennistoun against war, Glasgow University anti-war society and was supported by the Scottish Coalition for Justice not war.

Rose Gentle, whose son Gordon tragically died in Basra last June, sent the message to all would be army recruits: “Think before you sign, I wish my boy did.” Gordon was only in the army six months before he was sent to Iraq. (There will be a documentary on BBC1 on Tuesday 22nd February called ` One mother’s son` at 10.35pm)

There was an incredibly large police presence and I counted 15 police vans including 7 in Hanover Street alone. The mass `die-in` was due to take place in George Square at 5.00pm but this was not possible as the square is closed for `refurbishment` - perhaps to accommodate more peace protesters?

A crowd of around 100 or so assembled at the statue of Wellington outside GOMA (Gallery of Modern Art) in Queen Street.
There were chants of “Bring the troops out now!” and “Tony Blair, you are scum, you stole money off my mum!” and “We all live in a terrorist regime!” (To the tune of ♫ `Yellow Submarine` ♫)

At 5.26 about 40 people sat down in Queen Street at the junction with Ingram Street for a sit-down protest, blocking the traffic for nearly a quarter of an hour. There was a queue of 4 buses headed by the number 43 and the police demanded an end to the sit-down under penalty of arrest. This was ignored however and the singing went on. “Power to the people! Tell me can you feel it? Power. Power. Power. Power to the people! The people got the power, it gets stronger by the hour!” There were cheers as passers by joined in including Scottish Socialist MSP Rosie Kane. The time reached 5.35pm to chants of “Why won’t you meet Rose Gentle, Tony?” referring to Prime Minister Tony Blair’s refusal to meet with Rose Gentle after she requested a face-to-face meeting. She wrote to Cherie Blair, wife of the Prime Minister, but Mrs Blair wrote back through her secretary saying that she could not (or would not) get involved.

The chants continued with “George Bush, CIA, how many kids have you killed today?” and “George Bush we know you, daddy was a killer too!”

The police appeared first to be about to move in but seemed to hesitate. At 5.38pm the protesters started to stand up but remained in the street for several more minutes singing “Power to the people!” A fire engine (unconnected to the protest) diverted attention momentarily. Then at 5.40pm the protesters left the street and gathered around the statue of the Duke of Wellington outside the Gallery of Modern Art, for once remarkably neither he nor his horse had the usual traffic cones on their heads.

The number of police must have been over 100 strong, some on motorbikes, some on horseback but most on foot in their characteristic yellow fluorescent jackets; either they were expecting a much bigger protest or perhaps the aim was to intimidate the demonstrators.

There were two huge banners spread out on the pavement – one saying `Free Palestine` and the other `End Israeli Terror`. Fake blood was sprayed on the sidewalk and then the protesters went on an impromptu march through Royal Exchange Square to Buchanan Street. A police cameraman filmed the marchers as they advanced through central Glasgow chanting, “Bring the troops out now!” Then along Argyle Street turning into Queen Street there were chants of “Why won’t you meet Rose Gentle, Tony?” and “Hey, Ho! Tony Blair has got to go!” as the police videoing continued. (Angela McCormick of `Globalise Resistance` had earlier complained to the police that the filming was making people feel uncomfortable but to no avail)
Interestingly though there was plenty of filming by the police there did not appear to be any TV news teams present.

On returning to the Wellington statue it was announced there was to be a Public Rally at Renfield St Stephen’s Church on Bath Street, Glasgow on Wednesday 23rd February with confirmed speakers including novelist A L Kennedy and Tommy Sheridan of the SSP (Scottish Socialist Party). There will be a protest outside the Scottish Labour Party conference in Dundee on Saturday March 5th and then the big anti-war demos of March 19th in both Glasgow and London and indeed around the world.

The demonstration was on the verge of breaking up peacefully around 6.15pm when out of the blue there were two arrests. A 21-year-old student was lifted, apparently for possession of a pencil! A peace campaigner in her 30’s was then also arrested – for no obvious reason.
Then after the two protesters had been taken to Glasgow’s Stewart Street police station, some of the demonstrators made their way there to check on things. They were advised by the arrestee’s solicitor Amer Anwar that the best thing for the crowd to do was to disperse. This they did at a little after 7.00pm.

All in all the day’s protest, though small, was vociferous and conspicuous and is something to build on.
The two people arrested were expected to be released in a matter of hours as no serious charge could realistically be brought against them.

Seven labelled photos of the day are attached.