Students studying at Stirling University, involved with the group People and Planet, today protested at the Army Recruitment Centre in Stirling. 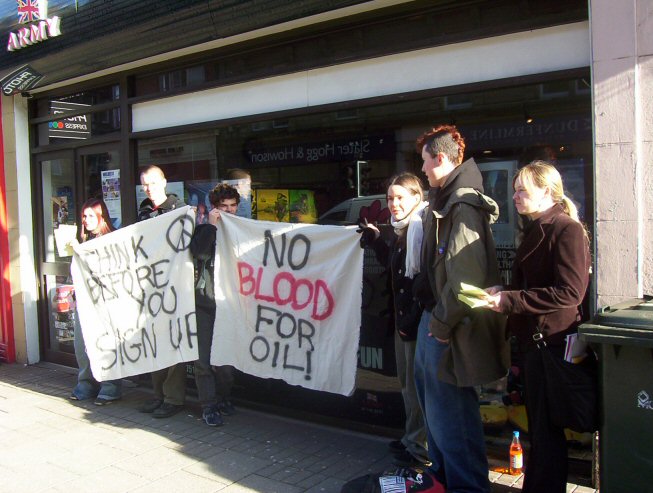 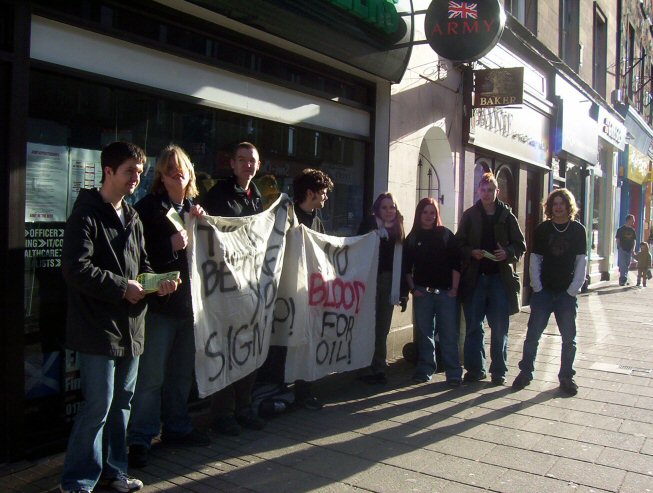 They were demonstrating against the way that people are recruited for the army and say that the army concentrate on those with financial difficulties such as students or the unemployed, even going as far as to recruit inside Job Centre’s, and that this was an unacceptable way of persuading people to take a potentially life and death decission. The vigil also condemned the war in Iraq where hundreds of civilians have died and violence still continues.

When the students arived the big tough army boys ran in, locked the door and called the police. After a while the cops came and were slightly rude and took everyones name and address. Then, they kindly fucked off and left the students to get on with it. There was much support from locals (aswell as the disgruntled look on the odd Torry) with one young lad going as far as to chant "no more Bush! Shave your fannies!"

The leaflets that were given out had a message from Rose Gentle, who’s son was killed in Iraq, after he was sent out having just completed six months basic training, in June 2004. One banner said “think before you join up!” while another read “no blood for oil!”

Sam Jones, a member of Stirling Uni People and Planet, gave the message “I am here to try and persuade people to think about what they are signing when they join the military. Many people join up for the wrong reasons, like Gordon Gentle, and end up loosing their lives for a war that they, and many others, don’t want. Just yesterday I seen three boys, who can’t of been any older than 18, go inside the centre. Are they joining up to defend their country against attack, or because they are desperate for work want money? I am fed up of seeing young men and woman returning in body bags for lies and oil!”

After they got board they went to Glasgow and mucked about with about 200 coppers.

Today marks the second anniversary of the massive global protests against the war in Iraq and today groups all over the world will be taking action to make their voices heard. Although according to the Prime Minister the war is over, it appears to still be a very hot issue.