Greenpeace action reports from around the world on the day the Kyoto Protocol became law... 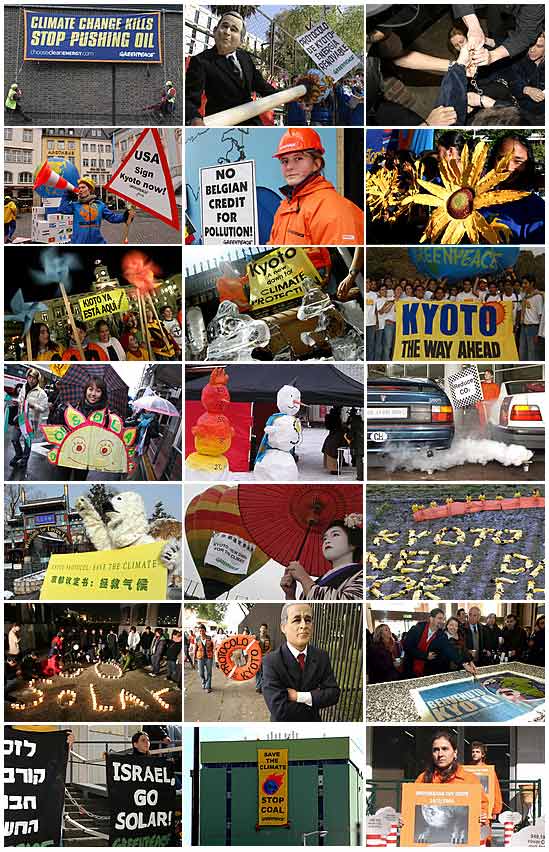 Kyoto Protocol becomes law - The new dawn for the climate

Greenpeace activists, supporters, and volunteers around the world celebrated the coming into force of the Kyoto Protocol with banners, windmills, actions against dirty power, and a shutdown of trading on the International Petroleum Exchange in London. After more than ten years of protracted - sometimes exhausting, often frustrating - negotiations, thirty-five industrialised countries along with the European Community are now legally bound to reduce or limit their greenhouse gas emissions.

As anyone involved in any international negotiating process will tell you, it wasn't easy.

Vested interests like the fossil fuel industry and heavy energy users interfered and obstructed at every turn. Oil producing nations such as Saudi Arabia kept up a constant whine for compensation for loss of oil revenue and politicians of all persuasions ducked and dived and tried to avoid any decisions they thought would make them unpopular at home.

Add to that the interminable 'diplo-speak' that participants tend to favour and the propensity to spend hours discussing whether to replace the word 'should' with 'may.' You begin to get a picture of how slow-moving and cumbersome these talks can sometimes be and what an achievement the entry into force of the Kyoto Protocol is.

Then of course there was the biggest obstacle of all to an agreement - the United States. The Bush administration withdrew from the Kyoto Protocol in early 2001 but it didn't wash its hands of the negotiations. With the active support (some would say under the instruction) of the American fossil fuel industry and its well-funded front groups, the US government worked tirelessly to derail the treaty.

It is a testament to the commitment and tenacity of the many countries that acted in good faith and steered the agreement through these stormy seas, that we now have a legal framework for protecting the climate.

But Kyoto itself, if implemented to the letter, will only have a minimal effect on the changing climate so where do we go from here?

'Dangerous climate change' is already with us and the greenhouse gases we have pumped into the atmosphere since industrialization in the late 19th century mean a rise of 1.2C to 1.3C (2.2F - 4.1F) above pre-industrial levels is now unavoidable.

But scientists are warning that warming could increase by up to 5.8C (10.4F).

Avoiding catastrophic climate change means keeping temperature increase to below 2C. There will still be significant impacts on ecosystems and many millions of people will be threatened with increased risk of hunger, malaria and flooding and billions with increased risk of water shortage. While this is certainly dangerous to the millions of people who will be affected, it is probably the best we can do.

But time is not on our side. We are within a decade or two of closing off our options. Dragging our feet now will force us into a choice between climate catastrophe and economic catastrophe in the next couple of decades.

There is clearly much to be done and little time to do it.

The choice is clear - there is none.

Greenpeace activists flew a hot-air balloon over Kyoto with the message "Kyoto: The new dawn for the climate."
Volunteers launching Greenpeace's 'Solar Generation' project spelled 'Go Solar' in candlelight under the ancient Sanjo Bridge crossing the Kamo river in Kyoto.

Members of 'Solar Generation,' participate in a parade through Kyoto to celebrate the Protocol that bears the city's name coming into force.

More than 200 schoolchildren take part in a human mosaic on the Rice fields of Pulupundan, forming the message: "Kyoto Protocol: new dawn for the climate." The human mosaic is a tribute from Greenpeace to the community of Pulupundan, who have successfully rejected a coal power plant project planned for the site. There are now plans to build a wind farm that will become source for clean renewable energy for the island.

Greenpeace activists have scaled the proposed coal-fired Marsden B power station just south of Whangarei (and they're still there!). After scaling the 50m high structure, the four activists dropped a giant yellow banner reading "SAVE THE CLIMATE, STOP COAL" and featuring the image of a burning Earth. The activists are logging live updates to an action blog.

A Greenpeace activist dressed in a polar bear suit holds up a sign advocating the Kyoto protocol near an entrance to the Forbidden City.

Greenpeace activists stand next to ice sculptures placed outside Sydney's parliament to protest at Australia's increasing greenhouse emissions. Australia has the third highest greenhouse pollution per capita due largely to burning coal and oil in power plants, factories and cars.

On the eve of Kyoto coming into force, Greenpeace activists protest against the use of fossil fuel by blocking the entrance to the Israeli Electric Company headquarters in Tel Aviv.

At the midnight hour in Puerta del Sol, Madrid, Greenpeace celebrates the entry into force of the Kyoto protocol with music, banners and windmills.

Greenpeace youth (JAGs) construct a platform for planet Earth on stones showing the flags of the countries participating in the Kyoto protocol.

Greenpeace Czech Republic marks Kyoto coming into force with a large banner reading "Kyoto for the Earth" in the front of famous National Museum in the centre of Prague. The museum is a place marking historic and symbolic events in recent Czech history.

Greenpeace, WWF, Legambiente and other NGOs celebrate the entry into force of the Kyoto protocol in front of the Galleria Colonna.

Greenpeace activists placed miniatures of all 27 coal and oil power stations in front of the Ministry of Environment, protesting against the current energy policy of the Greek government. The government is refusing to promote renewable energy and reduce greenhouse gases emissions.

A hotheaded snowman stands guard outside an information booth where activists gathered signatures and distributed information about Global Warming.

George Bush's "Flaming Earth" vies with the windmills of protestors in this street theatre in Mexico City.

Greenpeace Limited (Greenpeace UK) volunteers halted trading on the global oil market by occupying the International Petroleum Exchange in London. Thirty-five activists entered the high security building near Tower Bridge shortly before 2pm, just as the world market in Brent crude was about to switch to London.

They attached distress alarms to helium balloons, blew foghorns and handcuffed themselves to the trading pit. On the outside of the building climbers unfurled a banner saying: "CLIMATE CHANGE KILLS - STOP PUSHING OIL"