A large military police operation took place on the morning of February 16 to evict the land occupation of Sonho Real(Real Dream) in the city of Goiânia, Brazil. Two people got killed, over 800 people got arrested and several people are wounded, five of which severely. Among the arrested there are two Indymedia volunteers, one from Goiânia and one from Indymedia New York. 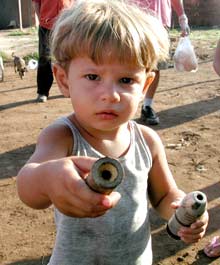 The occupation started in may 2004 in an area that had been abandoned for years, and quickly was joined by 3,000 families. In January 2005, the Ministry of Justice ordered the eviction of the land, and since then police have been harrassing the families with death threats and unprovoked attacks. On February 11, police suddenly arrived shotting gas and concussion bombs, as well as firing rubber bullets against the people. One child got hit by a concussion bomb. On February 15, in another attack, police shot bombs and fired live amunition. Two people got hurt. Due to the pressure from social movements and human rights groups, the state of Goiás Governor Marconi Perillo eventually committed himself to not evict people in a violent manner. Hear audio recording of his commitment.

This attack, and the confirmed death of two people show that he did not stick to his words. You can pressure the authorities for the release of those arrested, and for the investigation of the murders by writting to: