On 16 February 2005, the Kyoto Protocol came into effect, legally binding most industrialised countries to greenhouse gas emission reductions by 2012. On the same day 35 Greenpeace activists halted trading on the global oil market by occupying the International Petroleum Exchange in London, and disrupting the trading - there were 27 approx arrests [audio report].

The Kyoto treaty was agreed in 1997, but has since been watered down by special provisions and has been often criticised as being too little, too late, and for promoting potentially damaging practices.

Later in the evening more activists blockaded and disrupted the oil industry's most prestigious annual gathering in a Park Lane hotel in London, complete with a banner reading "Climate Change Kills - Oil Industry Parties". There were also actions and events around the world - see global reports and pics. Recently (on 25th January) the Greenpeace Business Lecture itself a target of climate campaigners when the 'Greenwash Guerrillas' from London Rising Tide protested against what they called they Greenwash of Shell's Chairman, Lord Oxburgh [see report and pics].

Burning Planet March to US Embassy

On Saturday 12th February, hundreds of people marched to the US Embassy in London as part of the annual Campaign Against Climate Change Kyoto March [see full report and pictures]. Carrying all 141 national flags representing the current signatories to the Kyoto Protocol, together with costumes and bicycle powered sound systems, the march passed by the ExxonMobil offices [see exxonsecrets.org] and the Australian Embassy (Australia is the only major developed country not to have ratified Kyoto apart from the US), before arriving at the US embassy for speeches from many campaigners. There was also a critical mass bicycle protest starting from the Thames Flood Barrier [pics]. The event was also part of an International camapaign that saw events scheduled around the world, including Edinburgh in Scotland.

The next big mobilisations on Climate are expected to be at the G8 Summit in Scotland, with the last day of the summit, Friday 8th July, set aside as an International Day of Action Against Climate Change [draft call], and at the 'MOP' climate talks later in November.
See also: AUDIO: Speeches from Campaign against Climate Change Tour (london 3rd Feb) | Rising Tide | SchNEWS on Kyoto and Oil | Oilwatch Interview 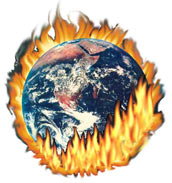 141 countries have ratified the treaty, some of which have taken on greenhouse gas emission reduction targets. However, the largest per capita emitters (US and Australia) are continuing to increase their massive emissions and corporations are expanding the use of climate threatening technologies as they shift industrial production to the developing world. Countries like Britain are pretending to reduce their national emissions while actively supporting massive fossil fuel projects in other countries, such as the Baku-Ceyhan pipeline project. Meanwhile, the World Bank has been exposed as investing primarily in fossil fuel projects despite a massive public relations effort to portray itself as focused on climate change mitigation.