The NATO meeting in Brussels sets the stage for more foreign troops to enter Iraq, and free up the US for the planned June attack on Iran... good times.... 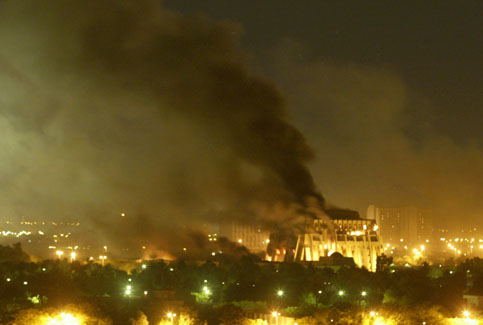 Canada is front and centre at the current boot licking campaign in Brussels.
It’s a proud moment for all Canadians to see our PM PM down on his knees getting the pink carpet out for Bush’s brogues.

Another metaphor!
The elephant has farted, and we all have to smell the coffee. Bojo Bush has made the call for collective amnesia about Iraq and everyone is eager to say, “What Iraq? What are you talking about Bojo? We love you guy.”

Canada has been helping out the elephant since NATO invaded Afghanistan four years ago.
Canadian troops freed up US Petrofacist gangsters to carry on the Lords work in Iraq. And don’t forget the proud role Canadian Forces undertook to be stationary targets for the US Air National Guard. “The Air National Guard, We Are So High.”
But our troops aren’t just sitting ducks in Afghanistan; far from it. Our troops are performing such important work as digging up cemeteries and taking DNA samples from corpses. Noble work grave robbing be.

Does Canada take pride in the assistance being provided to help Afghanistan become the world’s leading supplier of heroin? Or does the pride stem from the work being done on the growing “climate of fear and terror” abundant in the failed state according to the UN? For sure we can all give a prayer of thanks for the work Canadian forces personnel under NATO leadership are providing by aiding and abetting the Americans in their 24 hour a day torture, homicide, and sodomy triathlon over at Bagram Air Base.

Even as a new UN report issued this week states that Afghanistan is the 6th poorest nation on the planet, and life expectancy is still in the low forties, literacy is lower than 30%, and that International assistance is urgently needed to stop the country’s slide back into total anarchy, the Canadian government proudly maintains that the Canadian Forces contribution to Afghanistan is making a real difference.

Meanwhile NATO is having it’s big NATOCON 05 in Brussels. Former Secretary General Lord Robertson and NATO Supreme Commander Wesley Clark will be there signing autographs. There’ll be a screening of a blooper reel from “Kosovo the air campaign.” Oh, and check out the hard core fans dressed in their “uniforms.” (Guys, get girlfriends!)

Now the game has changed boards, and everybody’s talkin’ ‘bout I-raq. This Brussels love-in has been the chance for everyone to hug and kiss and make up.
No wonder then that Canada is eager to ante up 30 Canadian Forces personnel for training Iraqi middle management officers in Jordan. And a commitment of a million dollars to a general NATO slush fund to bankroll this pathetic quisling enterprise.

This floating crap game on the Euphrates got going last July when former CIA-agent and current American puppet Iyad Allawi asked for NATO’s help in Iraq. Oh, NATO jumped to the cause with both feet. (Let’s see if I have this right: American appointed Prime Minister goes to the American led military alliance and asks for help…. Hmmm… what are the odds that he wouldn’t get it? None! Okay. Phew, that had me worried for a moment.)

But there seems to be more to it than this even; for in his Brussels speech PM PM had this to say about Canada’s commitment to American atrocities in Iraq: “Canada has been involved in police training in Jordan since the beginning of 2004…”

http://www.pm.gc.ca/eng/news.asp?id=425
What? I didn’t know we had provided police trainers to Jordan since the “beginning of 2004.” Maybe I knew it at the time but had forgotten. This sort of stuff never ever makes the nightly news. So, should I take pride in the knowledge that Canadian police trainers are schooling the next generation of Iraqi torturers, or that Canadians are training the walking dead? Who cares!

Now that Canada is eager to jump in on the big Iraqi gang bang, who is going to be pimpin’ this ride? I expect that NATO will be providing it’s own general staff to oversee NATO troops. Make sure that the NATO forces are separate from the Americans, and that there’s no “mission creep” into darker, murkier, American led waters.

Anyway, although the war in Iraq was illegal, and the Iraqi people want the US out as of yesterday, and though the situation in Iraq is increasingly unstable and violent thanks to the US presence there, and the torture and the rape and the murder of Iraqis by Americans continues, I guess Canada’s assistance to Iraq is hopefully so the region can become more stable; Iraq can get back on its feet more quickly and tensions in that neighborhood can calm down a bit.

Things have been getting pretty heated over there what with America accusing Iran of wanting a nuclear weapon and such. It’s good to see Canada playing it’s traditional role as peacekeeper and trying to smooth things over.
This is how PM PM expressed Canada’s position at the NATO meeting in Brussels: “We all recognize the serious proliferation threat and human rights situation that Iran presents. And we all agree that Iran must be encouraged to end its nuclear weapons program and to proceed with reforms. While further steps will be decided by the UN Security Council and the International Atomic Energy Agency, we must be prepared to stand behind our words with stronger measures if necessary. (emphasis added)
Oh. Kay. Not as peacekeepery as I thought it would be….
The mouse is leading the charge. Super. Maybe Canada can take on North Korea as well. I hear that the Pyongyang Atomic Kim Chee is really good this time of year. They’re getting ready to offer home delivery soon too.
When the mouse leads the elephant you know that this either a Disney cartoon, or the Seventh Sign of Armageddon.
Cheese anyone?