Report with photos of Public Rally in Glasgow on Wednesday 23rd February 2005.

This is a 1,300 word report with 5 photos of the Public Rally in Glasgow on Tuesday 23rd February 2005 which was to help build for the International day of action on Saturday March 19th 2005. 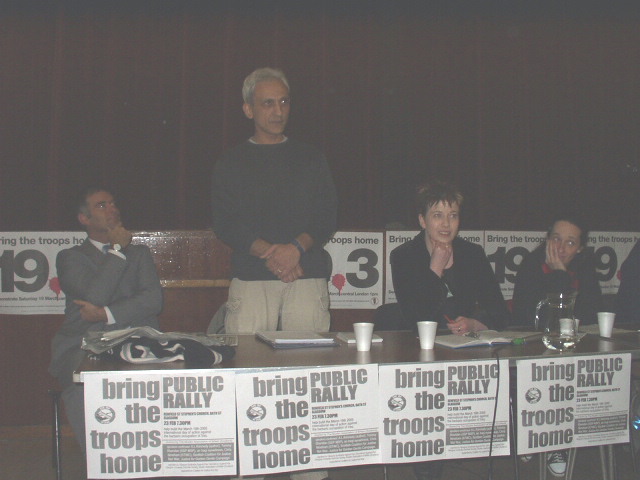 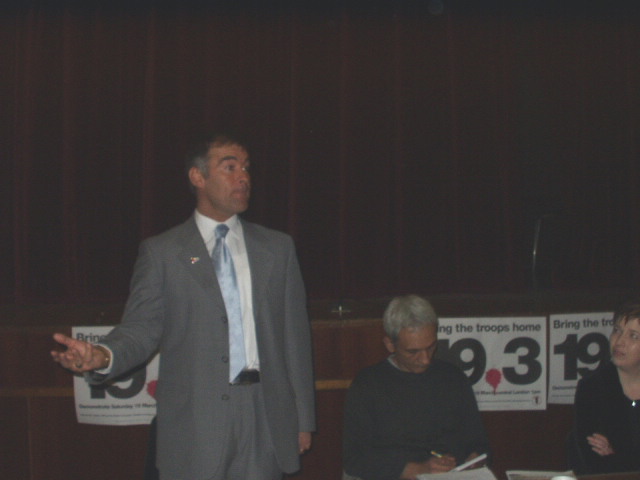 Tommy Sheridan speaking, to left is Iraqi engineer Ahmed Rustan, then the chair. 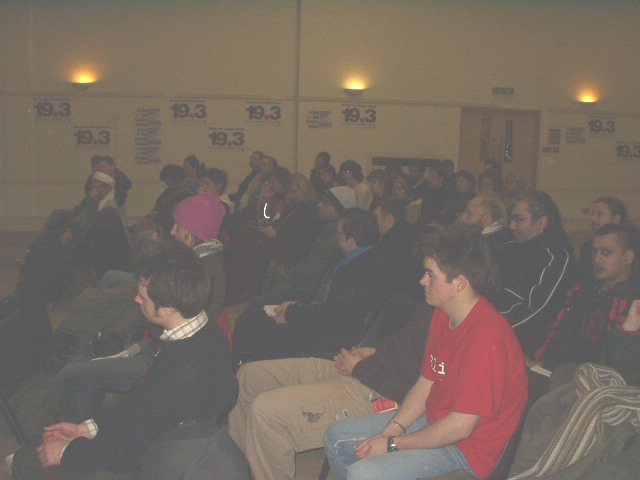 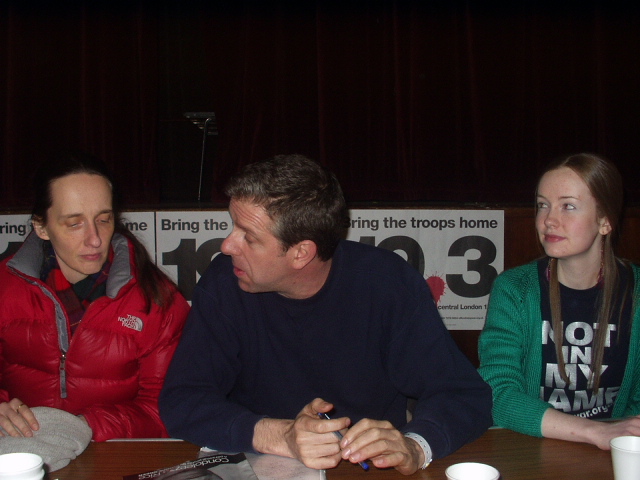 From left; A L Kennedy, Chris Nineham of STW and Debbie of Glasgow University. 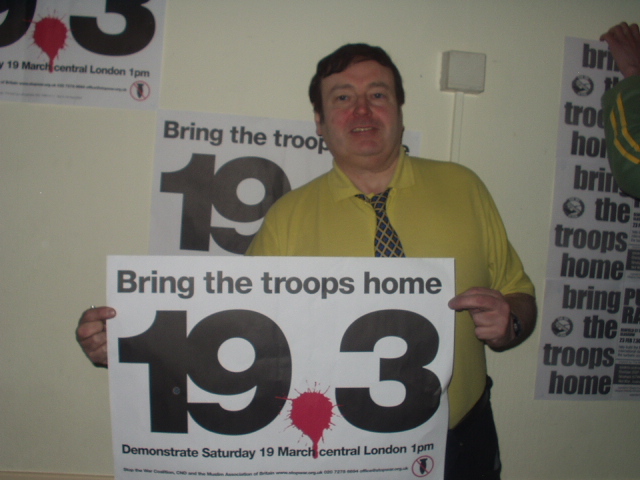 Paul from Edinburgh Stop the War reminds the rally of the big day on March 19th.

Report of Public Rally in Glasgow on Wednesday 23rd February 2005.

The hall was festooned with posters and placards saying `Bring the troops home` and `Demonstrate Saturday 19 March central London 1pm`. The public meeting started a little after the allotted starting time of 7.30pm due to the atrocious weather with some people coming from Edinburgh – an hour’s journey by train.

The first speaker was Iraqi Ahmed Rustan who is an environmental engineer by trade and also a writer. He made the point about the confusion between Iraq and Iran in the 1980’s when Saddam was an ally of the West. He spoke of the CIA support for Saddam in Egypt where Saddam had fled after an abortive coup in 1959. He was contemptuous of the recent elections in Iraq, which were monitored from Jordan – hundreds of miles away.

Second speaker was Scottish writer and activist A L Kennedy (author of `So I am glad`, `On Bullfighting` and `Paradise`). She described the forces, which invaded Iraq as “The coalition of the insane”. She spoke of the horrific effects of DU (depleted uranium) thousands of tons of which were dropped on Iraq in the two Gulf Wars. This carcinogen, which has a radioactive half-life of 4.5 billion years, has led to a 7 to 10 fold increase in cancers in Iraq. Many of the weapons used in the war were illegal under International law such as cluster bombs and napalm. The army does not look after its ex servicemen well with one in four homeless people being ex forces. She said that the recent hubbub about the Jerry Springer show with its `F` and `C` words was a distraction as after all no one was killed while in Iraq many thousands have died.

The third orator was a Debbie Kettle of Glasgow University students against the war. She made the point that after no weapons of mass destruction had been found the rationale for the war was then given as installing democracy. She reminded the audience of the visit to Edinburgh University by Noam Chomsky on Wednesday March 22nd and of the big demonstration against the G8 at Gleneagles on Wednesday July 6th. She finished by saying the vast amounts of money spent on the war should be spent on other things like health services.

Fourth to speak was Chris Nineham of Stop the War who held that there was a huge gulf between public opinion and Government policy. While the recent elections in Iraq were spun as `free and fair` in fact the whole occupation was in crisis. The occupying powers cannot even secure the road from Baghdad airport to the city centre. They cannot realistically send more troops without introducing conscription, which would be very unpopular. He spoke of rumours that the US might attack Iran in June. He stressed the importance of the demonstrations on March 19th and urged people to build up to them in the hope of making them comparable in size to the protests of February 15th 2003 when tens of millions of people took to the streets worldwide.

Fifth and final speaker was Scottish Socialist Party MSP (Member of Scottish Parliament) Tommy Sheridan. Addressing the assembly in his typical eloquent and passionate style he said that for the first time in British political history Parliament would pass a law that a politician will decide who goes to prison rather than a judge or jury. Even pro establishment judges are saying that detainees in Belmarsh are there illegally. Yet this hugely important piece of legislation was given just two days debate in the commons. He joked that there was a rumour circulating that the thinking behind the house arrest policy was economic. The idea was to encourage people to stock up on computers, televisions, stereos, video recorders, DVDs etc. so that their periods of confinement would be comfortable ones! He said he disliked calling the top British General in Iraq `Sir` Michael Jackson but he had to distinguish him from the other Michael Jackson! General Jackson was worried in 2003 that an illegal war in Iraq might see him in a cell in The Hague next to Slobodan Milosevic. He went on to say there is no justification for the war and occupation in Iraq and he stressed the importance of March 19th. Prime Minister Tony Blair will be like Basil Fawlty in `Fawlty Towers` when he says, “Don’t mention the war!” but we WILL mention the war. He spoke of his scepticism of the possibility of a US attack on either Iran or North Korea both of who might be able to fight back. He suggested the US might go for a soft target like Cuba.

The meeting was then opened up to contributions from the floor with a point that the police are thinking of using water cannon for the first time against British demonstrators. Also the people, most of whom don’t want him here, did not invite Bush. We should show him that he’s not welcome. Another contribution from the audience was that the protest at the Scottish Labour Party conference in Dundee on March 5th could be used as a dry run for both March 19th and Gleneagles. Yet another input was that the demonstration at Gleneagles was the most important event in Scottish History and everyone should watch `Braveheart` before turning out to protest!

One voice from the audience was that of Angela McCormick of Globalise Resistance who informed the meeting that she had been banned from protests in Glasgow after the day of action on February 15th!

The speakers dealt with some of the points made from the floor with Ahmed, from Iraq, opining that regarding the Iraqi elections “Whoever you vote for in Iraq the Americans win.” He asserted that the British Government wanted a terrorist attack to happen in Britain so that its policy on Belmarsh would be justified.

Alison (A L Kennedy) bemoaned the appalling and tragic situation in Iraq while Chris Nineham spoke of the `cheek of it` when the G8, the biggest murderers in the world are being invited to Scotland. He maintained that it would be a great thing if the occupation could be ended, as it would give hope and encouragement to peoples in other parts of the world. He suggested we start by making a big noise at the Labour Party Conference in Dundee on Saturday March 5th.

The rally ended a little before ten O’clock with a general feeling that the gathering had given inspiration for the future events.

Saturday March 19th: Worldwide demonstrations against the occupation including central London at 1.00pm and also Glasgow.

Wednesday 6th July `Another World is Possible` THIS IS THE BIG, BIG ONE! Demonstration at the G8 summit, Gleneagles. Assemble 12.00 noon at Gleneagles Station. If you can’t afford £270 for a single room at the Gleneagles Hotel or £1,500 for one of the suites or if £10 for a sandwich and £3.75 for a cup of tea seems pricey fear not! Alternative arrangements may be available!

Five labelled photos of the evening are attached.