Critical mass in Nottingham at 5pm

Critical mass will have one meeting point: the Savoy Cinema on Derby Road. This will be at 5pm.

Please let everyone know and round up as many people as possible.

After this it will be monthly (last friday) at the same time, so feel free to make your own publicity. 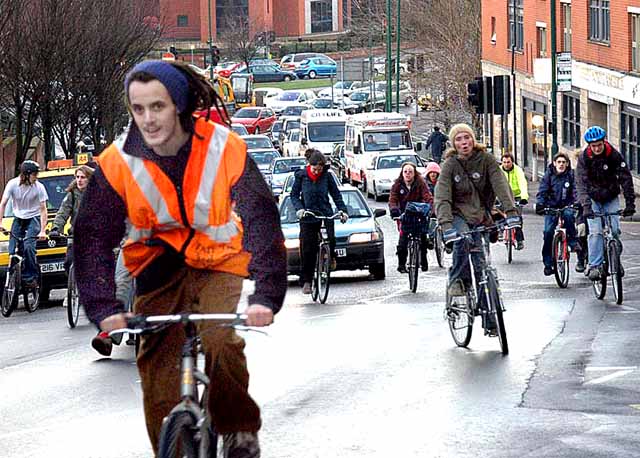 On Tuesday 15th Feb, around 30 cyclists gathered at about 3pm in Nottingham for a critical mass ride with the theme of 'no more blood for oil' and 'no G8 2005', together with raising the issues of transport priorities in the city.

We set off towards the city centre and went round and round a key rounabout in the city centre until we became victims of our own sucess ie we couldn't move because the roundabout was backed up with stationary traffic. We then set off through the centre of Nottingham and down to another key roundabout with chants of 'no more blood for oil' and 'get out your car and on your bike'.

The drivers must have supported us because they were all beeping like mad at us. One or two SUV drivers seemed particularly inconvenienced, especially when they tried to pass us by mounting the pavement which they suddenly found to be blocked by bikes.

We cycled round for around two hours and fun was had by all.
It is hoped to make the critcal mass a regular monthly event so watch this space for news.