At the end of Fashion Week in Milan, anti-precarity activists pulled off an ambitious spoof against the fashion industry and the mainstream media. The scene was set earlier in the week when protesters targeted the a cat walk show by Prada and issued a statement that there would be further protests and that the fashion show by the controversial japanese designer Serpica Naro. On Thursday another show was disrupted when eight women breached security and took over the cat walk and issued further statements over the microphone before being kicked out. Milans police contacted the press agent of Serpica Naro and warned them of the threats being made to disrupt her show which was schedualed to take place on saturday evening. The media ran a few stories and the agent for Serpica Naro was interviewed about the prospect of protests by anti-precarity activists. 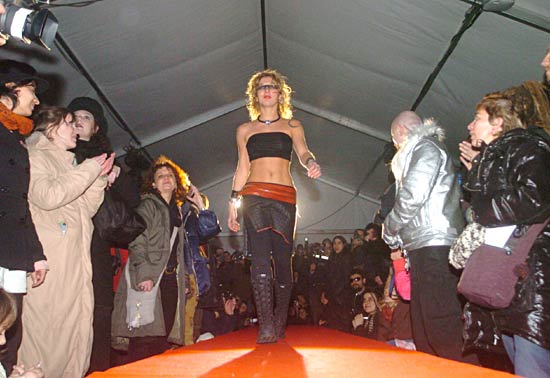 Saturday arrived and preparation for the Serpica Naro show were on the way while in a nearby social centre a gathering of activists swelled to around a hundred. On mass the protesters left the social centre and headed for the location of the fashion show which has been set up in a large marquee in a car park on a bridge over the railway by a large hotel.

The police however had no intention of letting the protesters disrupt the fashion show and were present in large nummbers blocking all access to the bridge (the location being almost perfectly choosen to facilitate such protection). There was a stand off but the protesters werer laughthing rather than being intimidated or upset at being prevented from reaching their target.

The police were rather confussed - the protesters showed the printed permission showing that they had infact official booked the bridge for an event. Even more confussing, the press agent for Serpica Naro was with the group of protesters, as were a group of models. Eventually the true came out - there was no famous japanese designer by the name of Serpica Naro. The whole fashion show was an elabroate hoax organised by anti-precarity campaigners who were now set to turn the tables on the media and the fashion industry with their own fashion show.

The police were slow in accepting their fate and the egg on their face but eventualy stepped aside for the crowd to access the bridge. With cheers the police line fell away and the work began on transforming the marquee into a fashion show.

At around 7pm the press began to assemble, still on the whole, unaware of the joke. The show began and Serpica Naros press agent took the mic to and explained the situation to the gathered media. At the same time, a mass of people had marched onto the bridge behind the banner of San Precario - the mythical patron saint of precarious workers. The group and the banner entered the marquee to cheers.

The spot lights came on an traversed the cat walk as the show began. Seven models came out one at a time in custumes designed to expose and poke fun out of issues relating to the precarious nature of employement. Cameras flashed at TV cameras jostled for postion as the show continued.

After the industrial couture there were additional fashion shows including Sailormars from London - a collection made entirely from waste fabric and trimmings thrown away by the garment industry of east london.

The party continued into the night and the organisers of the spoof awaiting the mornings press to see exactly what their had reaped. The total cost of the action was in the region of five thousand euros. With the slogan ´Precarity is in Fashion´, the campaign should hopefully shed a little media light on the issue for this week at least.