Reporters Sans Frontieres (Reporters without Borders) issued a statement on March 1 calling for Austrian citizen Sandra Bakutz, who has been imprisoned in Turkey since February 10, to be released. 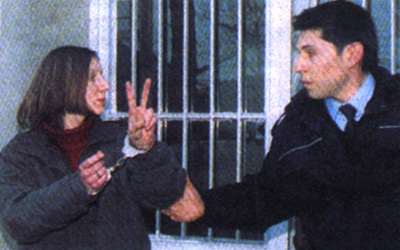 Sandra, photographed after her arrest

Reporters Without Borders, an organization that defends press freedom, would
like to express its concern to you about the fate of Austrian journalist
Sandra Bakutz of Radio Orange 94.0 and the German newspaper Junge Welt, who
was arrested on 10 February at Atatürk international airport in Istanbul.

Ms. Bakutz, who has been involved for several years in defending Turkish
political prisoners, was to have attended the trial of 82 activists who were
arrested in an international police operation on 1 April 2004 against the
DHKP-C (Revolutionary People's Liberation Party/Front), a Kurdish movement
classified as a terrorist organization by the United States and the European
Union. She was to have covered the trial for Radio Orange 94.0.

She was detained as soon as she disembarked from her flight from Vienna. The
next day she was brought before the 12th Court for Heavy Penalties to be
told the reason for her arrest, namely a September 2001 arrest warrant
issued by the 2nd State Security Court (which was then responsible for
trying Turkish political prisoners and which no longer exists, having been
replaced by the Court for Heavy Penalties). Ms. Bakutz is charged with
³belonging to an illegal organization,² namely the DHKP-C. After this
hearing, she was taken to the Pasakapisi detention centre in the Istanbul
district of Üsküdar, and from there to the prison in the town of Gebze,
about 50 km from Istanbul, where she is now awaiting trial.

According to our information, while Ms. Bakutz went to Turkey as part of a
delegation arranged by the International Platform against Isolation (IPAI),
an international organization that defends Turkish political prisoners, she
was to have covered the trial of the 82 activists as a journalist and to
have produced a report for Radio Orange 94.0. Her alleged membership of
DHKP-C is in no way proven.

Ms. Bakutz¹s Austrian lawyer, Gabriele Vana, claims that your government¹s
authorities used a spurious pretext ­ ³membership of an illegal
organization² ­ just to prevent a journalist from investigating a
controversial aspect of the human rights situation in Turkey at a time when
your country is trying to join the European Union.

Since her transfer on 16 February to Gebze prison, Ms. Bakutz has had her
appearance before a judge postponed twice. An official explanation for this
extended ³police custody² is cruelly lacking. Her imprisonment, which has so
far continued for 17 days, is based on vague suspicions and is not supported
by an international arrest warrant. The Turkish justice system does not
respect articles 9 and 10 of the Universal Declaration of Human Rights
banning arbitrary detention and guaranteeing the right to a fair and
transparent trial, or article 19 guaranteeing freedom of opinion.

The Austrian ambassador and Austrian consul general in Istanbul went this
morning to Gebze prison but only the consul general was allowed to see her.
She shares her cell with 10 other political prisoners and is not allowed to
make telephone calls or have any other contact with the outside world.

Reporters Without Borders protests against Ms. Bakutz¹s detention since 10
February in highly questionable conditions which we consider arbitrary and
unnecessary, and we urge you to release her at once.

We trust you will give this matter your careful consideration.
Respectfully,