Join us in celebrating Thirty Years of Banner Theatre: 1974-2004

In Birmingham on 8-9 April 2005 Banner will be celebrating 30 years of
creating hard-hitting documentary theatre with and for community and trade
union audiences.

As you may know, Banner has based its work on key issues of our time,
ranging from fights to prevent closure and privatisation of major
industries, like coal, steel and public utilities, through to struggles
against racism, sexism and imperialism. To date the company has created over 30 major documentaries, numerous cassettes and CDs, plus hundreds of songs and street theatre productions. 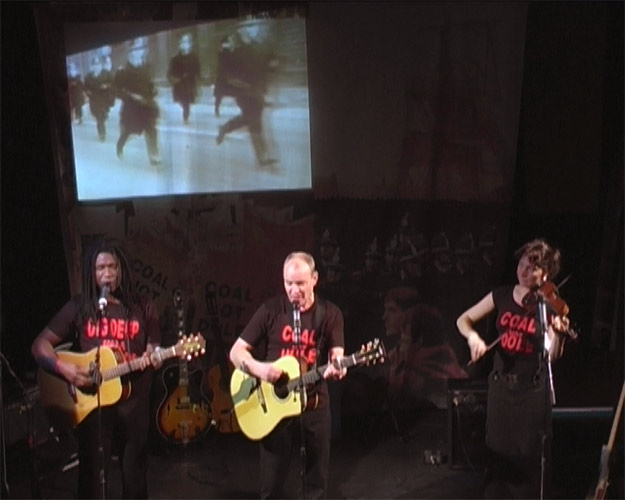 To mark this major achievement the company has arranged a series of
activities in early April this year. These include:-

* the launch of a songbook/history, featuring over 80 songs from Banner
productions, plus photographs and interview material, and a foreword by
American musician Peggy Seeger.

* the launch of a new show, Wild Geese

* a celebratory event in central Birmingham on 8 and 9 April

The celebratory event will be held jointly with the 2005 Charles Parker Day
hosted by the University of Central England - two days of debate,
discussion, exhibition and performance on Banner Theatre, Charles Parker,
Philip Donnellan and the traditions of documentary film, radio and theatre.
This includes two evening performances at Birmingham's Library Theatre:-

8pm Saturday 9 April - celebratory concert, with Banner's 1st of May Band
and contributions from some of the trade unions, community groups and
performers who have worked with Banner over 30 years.


The programme for the whole event follows. A brochure with full details and
photographs is available on the website www.bannertheatre.co.uk or by post.
Tickets for the evening concerts are £5 each; for the whole of Friday £10;
for the whole of Saturday £20; for the whole two days £25. If you would like
tickets or a copy of the brochure, contact

We very much hope you'll be able to attend some or all of the event and look
forward to seeing you there.

Charles Parker and the Documentary Tradition

The first Charles Parker Day, in April 2004, focused on Parker himself. This
year the aim is to consider broadcasting in much wider terms, past, present
and future and to feature invited speakers from international academic and
broadcasting communities, bringing together practitioners, researchers and
media teachers. Contributors will consider developments in radio and
television that maintain the spirit of Parker's work in both a UK and an
international context, with contributions from colleagues in Australia,
Canada, Europe and New Zealand.


In particular, the influence of Parker on documentary film will be
highlighted, with screening and discussion of the work of his collaborator,
film maker Philip Donnellan. A Friends of Philip Donnellan organisation will
be launched.


Last year's Parker Day saw the launch of a prize for student work in radio
and the shortlist will be featured throughout the day and the winner
announced. There will also be a presentation from the Radio Studies Network
(www.radiostudiesnetwork.org.uk/).

Banner Theatre will present a "work-in-progress" performance of Wild Geese,
a new documentary theatre production for 2005, exploring stories of exile,
asylum and migration, and combining video interviews, photography, graphics, archive film, live music and song in a "video ballad" for the twenty-first century.

This "show and tell" presentation will allow a unique insight into the
creative process of a company committed to documentary theatre and working with communities whose stories are rarely heard. It will provide audience members with the opportunity to contribute to the creative process and the production will be revised in the light of audience feedback.

Guest speakers including trade unionist Paul Mackney of NATFHE, Australian
academic Dave Watt (co-author of Workers' Playtime: Theatre and the labour
movement since 1970) and Canadian film-maker Don Bouzek of Ground Zero
Productions will give a range of different perspectives on Banner's work
over 30 years. Banner members past and present will lead a debate and
discussion about the role of documentary theatre now and in the future.

Starting with a screening of films by Parker collaborator, Philip Donnellan,
the afternoon session will explore the impact of Parker and Donnellan on
documentary film and the representation of ordinary people in political
culture. This will be followed by a panel-led discussion featuring Dave
Rogers of Banner Theatre, Birmingham film-maker and theatre worker Pervaiz
Khan, Don Bouzek, Dave Watt and others.

Banner's 1st of May Band will form the core of an evening of entertainment
with songs from its many documentary theatre productions, created in
collaborations and struggles with mining communities, steel communities,
Asian clothing workers, asylum seekers and refugees, health service workers,
black firefighters, trade unionists and others. Other invited guests,
including representatives from the Fire Brigades Union, the Iraqi Kurdish
Women's Centre, Women Against Pit Closures and Women on the Waterfront, will also participate.