From Friday 18th to Sunday 20th March, Basques living in the UK have planned a protest to highlight the lack of justice for prisoners and for their country, 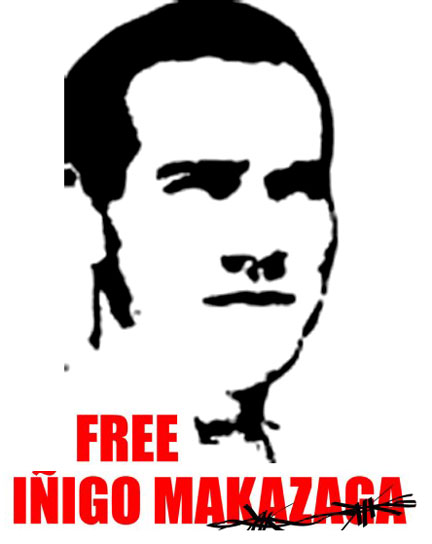 From Friday 18th to Sunday 20th March, Basques living in the UK have planned a protest to highlight the lack of justice for prisoners and for their country, and in solidarity with the only Basque held in a British prison, Iñigo Makazaga (HMP Belmarsh). The protesters will be doing a hunger strike in solidarity with Basque prisoners who are currently on their sixth protest. The weekend will also include talks on prisoners’ resistance, Iñigo’s case, repression in the Basque Country and other relevant issues.

Please help us to publicise this protest and highlight these cases!!!

The fact that this conference and protest are taking place on the same weekend of a national demo against the occupation of Iraq and when the use of illegal imprisonment and torture have gained momentum is not a coincidence. The imprisonment of Iñigo Makazaga is just one of the many which occur in the Basque Country since the toughening of repression after September 11. Iñigo is one of thousands of people imprisoned under the new anti-terrorist laws, applied to suspects and activists who have not been involved in ‘terrorist’ activities. The laws have had a major impact in Britain and all over the world - in the Basque Country those new measures have been used against Basques involved with the nationalist movement and who were not involved in illegal activity. More than 250 people have been detained and imprisoned in this way, held from between five days to three years without trial and even tortured. This injustice is happening because of the Spanish support of the allies on the ‘War on Terror’, and the invasions of Afghanistan and Iraq. This is the Spanish version of Abu Grahib, Guantamo and Belmarsh against Basques.

At the same time, Basque political prisoners in Spanish and French prisons come to more than 600 (six hundred). The physical conditions of these people are seriously deteriorating due to dispersion, beatings, reduction of hours outside the cell, restrictions on visits and increased isolation. In the last few months Basque prisoners have held a series of protests in prisons. These protests have happened in several prisons at once. The latest one was their sixth. The protests include lock-ups and hunger strike, and so London’s Basque Campaign has decided to use the same method, to show solidarity with them. In previous protest 126 prisoners locked themselves up across 13 prisons.

Currently, due to scheduling problems for both Makazaga’s lawyer (Gareth Peirce) and for his mother (she does not know what time her visit is due), the exact times of the talks can not be confirmed – we will advertised these as soon as possible.

Saturday 19th March
Protesters can take part in the Korrika (organized by London Euskaletxea ???????. Korrika is not part of the weekend protest ???????)

While the dates for this protest coincide with the national demo against the occupation of Iraq, it had to coincide with the prison visit by Iñigo Makazaga’s mother and her partner. This does not happen very often as she has to travel all the way from the Basque Country, and consequently the Basque Campaign believe that it will be very positive to do something when she is here to show support, and also so she can give a first-hand account of Makazaga’s case.

Makazaga’s lawyer Gareth Peirce will take part in the talk too. Gareth Peirce is held in high esteem for her defence of many victims of the British system, such as the Guildford Four, the Birmingham Six and currently, the Guantanamo detainees.

The weekend will also include another talk by the solicitor of the illegalised Basque separatist party, Batasuna, and a member of Euskalinfo (Bristol) (www.euskalinfo.org.uk) on legal repression against Basques. Both issues are repression measures targeting the Basque movement and violating democratic rights - freedom of expression, freedom of association, right of election, right of assembly and even more fundamental ones - unlawful detention and imprisonment, and torture.


The case of Iñigo Makazaga

Iñigo Makazaga (25) is a Basque imprisoned in Belmarsh prison (London), in Category A, special security status. Makazaga was an active member of the Basque student movement, as well as a member of the pro-independence Basque coalition Herri Batasuna's local committee in his neighbourhood of Vitoria-Gasteiz. He was an active and committed member of the community, involved in political and social activities carried out in the open, within the public domain. In February 1996 Iñigo was falsely accused of taking part in specified acts of public disorder, and after a huge media and police campaign he was accused of acts of sabotage. Iñigo was arrested and suffered considerable mistreatment. Iñigo explained his mistreatment like this: "[the police] threatened to split my head open if I didn't state what they wanted me to, all the while they punched me in the shoulders, in the chest, the ears and pulled my hair and threw me against the wall and to the floor."
Due to such terrorising experience, Iñigo decided to leave the Basque Country to restart his life. He chose the UK. In order to avoid more hassle from the police he decided to hide his identity. However, Iñigo was arrested in Dover on 24 April 2001 and faced a claim for extradition from the Spanish Council of Ministers because of alleged membership of an armed organisation – once again he’s accused of belonging to ETA only because of his political believes and activities.

The Spanish media were back on the attack, condemning Iñigo and violating his right of presumed innocence. It is clear that the case of Iñigo Makazaga is - as happens so frequently in the Basque Country – merely a case of political convenience. Again, Iñigo is just one of the thousands of Basques who have to seek refuge in different parts of the world as a consequence of repression against their political beliefs and activities.

It’s now three years since Iñigo was arrested and still there are no charges against him. Meanwhile he’s been held in isolation and miles away from his family and his country. If he’s sent back to the Spanish state he is at serious risk of further persecution and torture.
We demand the release of Iñigo from prison right now!!!

http://news.bbc.co.uk/1/hi/uk/3497942.stm
Representing former Guantanamo Bay detainees is just the latest in a series of high-profile cases championed by the civil rights solicitor, Gareth Peirce.
In a career of more than 30 years, she has appeared for, among others, the Guildford Four, the Birmingham Six and the families of the victims of the Marchioness river boat disaster.
He face, and her many past glories, are known in courtrooms throughout the land. When Gareth Peirce takes a case, journalists and lawyers' ears prick up.
The scourge of much of the legal establishment, Peirce's passionate advocacy and attention to detail have brought spectacular results. She is an unreconstructed, old-fashioned, radical lawyer.
"Transformed" criminal justice
Gareth Peirce's background seems a world away from the causes she today embraces. A product of Cheltenham Ladies' College, alma mater of many an upper class British gel, she studied at Oxford University before working in the United States.
It was here, in the 1960s, that she experienced at first hand the heady campaign for civil rights. The ideals which were embedded in Gareth Peirce at that time have been the bedrock of her subsequent career.
Returning to the UK, she took a postgraduate course at the London School of Economics before being recruited as a solicitor by the radical law firm run by Benedict Birnberg.
Birnberg - who also counted Paul Boateng, now a Cabinet minister, among his team - gave his solicitors freedom of choice over which cases they pursued.
Later Birnberg would say that Peirce had "transformed the criminal justice scene in this country almost single-handedly".
Peirce soon made her mark, representing two Luton men serving life imprisonment for murder.
This is how her career could have remained, certainly worthy but also virtually anonymous, had it not been for the Guildford Four.
Big-screen portrayal
In 1989, after emotionally laying out her case that the 1974 conviction of four Irishmen for participating in an IRA bombing campaign was unsafe, she saw her clients walk free in one of the most dramatic moments in British legal history.
The case of the Guildford Four made headlines around the world and was given the Hollywood treatment in the film, In The Name Of The Father.
Peirce, an intensely private person, was not impressed with her portrayal by the actress Emma Thompson, who received an Oscar nomination for her efforts. The film itself was criticised for what some saw as inaccuracies in the story.
Since then, Peirce's name has been synonymous with civil rights cases.
Her workaholic attitude and fastidious attention to detail have paid dividends, whether in the case of Judith Ward, another alleged IRA bomber, released after her conviction was quashed, or Frank Johnson, set free after serving 26 years for murder.
She has also campaigned against the detention of striking miners during the 1980s and, more recently, was on the legal team which represented the former MI5 operative, David Shayler.
Today, with the so-called War on Terror moving into full-swing, Gareth Peirce finds herself defending a number of terrorist suspects detained indefinitely in the UK as well as those who have just returned to the country from Guantanamo Bay.
Her views are as radical as ever, and she berates politicians for agreeing to what she sees as unacceptable measures since September 11. "Say terrorism and it excuses everything," she says.