Some human rights groups believe those techniques violate the Geneva Convention and are tantamount to torture, and they have labelled the report a whitewash. But if it were the dogs that were mistreating the detainees how come there hasn't been an independent animal investigation to find out if the dogs were in breach of the rules? 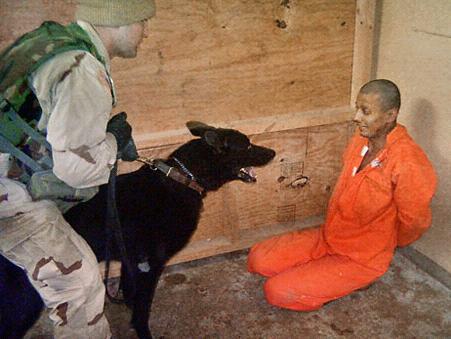 The dogs mistreated
and tortured the prisoners
(File photo) (Rooters)

US: The Pentagon has cleared itself of any high-level responsibility for the abuse of detainees in Iraq, Afghanistan and Guantanamo Bay because it was the guard dogs that initiated the torture all along.

So even though it was the dogs that committed these crimes against humanity they had the hide to interview the dog handlers?

But they needn't investigate themselves that's preposterous and a wast of taxpayers money.

Of course the Pentagon could do no wrong but that doesn't let those dogs of the hook does it?

I mean how could anyone make the dog bite someone if it's not in the Geneva Convention? That's why we need an animal investigation because it was definitely a dog trait.

Abuses at US military facilities have sparked international condemnation and undermined America's standing on human rights.

But no senior US Government or military figure has ever taken responsibility for the abuse metered out by the dogs and why should they? Dogs are independent!

After all these are just plain bad dogs who tortured the detainees, even though the dogs were trained with the knowledge of the Geneva Convention and ought to have known better!

While the Government has ordered multiple investigations into various abuse allegations, the widest-ranging inquiry has just released its report.

The inquiry - headed by Vice Admiral Albert T Church - has found that neither government policy nor faulty leadership contributed to the problem.

See it was the dogs all along!

Instead, it blames inept management at low levels and confusion over changing interrogation policy.

The dogs weren't disseminating information between themselves?

Admiral Church says he believes the investigation was thorough and exhaustive.

But did they thoroughly investigate all of the dogs?

He says that in order to determine authorised interrogation techniques, his team conducted more than 800 interviews and reviewed several thousand pages of documents.

But none of those he interviewed were from the top dog kennel I bet?

Admiral Church: "We did leverage all the other ongoing or completed investigations. We carefully analysed the 70 cases of detainee abuse that had been completed as of September 3 last year," he said

There has been enormous controversy about the interrogation methods the Bush administration has approved for use on detainees.

Stress positions, exposure to extreme temperatures and water boarding, which simulates drowning, are on the approved list.

Some human rights groups believe those techniques violate the Geneva Convention and are tantamount to torture, and they have labelled the report a whitewash.

But Admiral Church disputes that there is any link between interrogation policy and the physical abuse.

He's not responsible for the dogs that's up to the individual dog on the job to work it out, taking into account the Geneva Convention and the rules of engagement.

Church: "My key findings: there was no policy that condoned or authorised either abuse or torture, there is no linkage between the authorised interrogation techniques and the abuses that in fact occurred," he said.

"We did identify some problems with the development, promulgation, dissemination of interrogation techniques both in Iraq and Afghanistan, and we did note a lack of field-level guidance for the interaction of DOD and CIA personnel."

The report also looks specifically at Guantanamo Bay, where two Australians have been held.

Admiral Church praises the Cuban facility as a model for detention operations.

He finds there were only three substantiated cases of abuse out of more than 24,000 interrogation sessions?

The Admiral denies any conflict of interest or credibility problem in the US military investigating itself.

"I don't believe anybody can call this a whitewash. The facts are what the facts are," he said.

"I was an independent investigator. I took that very seriously and had the facts and the documentation led me to a different conclusion, I would have made that conclusion."

So does that mean that the dogs have to investigate themselves? I hope not because then there will be no-one to take the blame at all?

Republican Senator John Warner, who chairs the Armed Services Committee, says members of Congress have not made a final decision about whether top US officials should accept some accountability for the failures?

See! The dogs did it?


Leigh Sales and Just Us