In recent years, countries have successfully complained before The World Court that their citizens were sentenced to death by U.S. states without access to diplomats from their own nations. Withdrawal from the protocol means that the United States will not have to "bow" to the International Court of Justice, ever again. 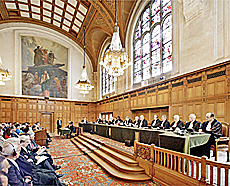 The United States of America has withdrawn from an international agreement that gives detained foreign nationals the right to seek assistance and talk to their consular officers.

The protocol gives the World Court, (also known as The International Court of Justice) the final word when foreign detainees are denied the right to see a diplomat from their country, when arrested abroad.

In recent years, countries have successfully complained before The World Court that their citizens were sentenced to death by U.S. states without access to diplomats from their own nations.

Withdrawal from the protocol means that the United States will not have to "bow" to the International Court of Justice, ever again.

It seems the United States of America (The World Watchdog) is dictating and practising double-standards --- a unique law for America and another set of laws for all other countries.

In the opinion of many legal experts, the United States government broke international law when it waged war on Iraq without explicit United Nations backing. Unrepentant, it has reserved the right to take similar action again, unilaterally if need be.

International laws concerning individual liberty, dignity, equality and respect for human rights, is proving harder for the United States to ignore; like a sheriff with a posse of deputies, international law is slowly catching up with America.

Despite its snobbery to The International Criminal Court, the United States may soon be forced by a United Nations security council majority to refer war crimes prosecutions in Sudan to the ICC Diplomats - that would represent a big boost for supranational criminal justice.

Last week's U.S. Supreme Court decision to abolish the death penalty for child offenders was partly a response to global opposition to capital punishment, which up until now America has refused to heed. But from an internationallegal standpoint, the ruling in effect dragged America into line with a key provision of the 1990 United Nation Convention on the Rights of the Child.

In another test case, concerning Mexican nationals on death row in America, the White House bowed this month to a ruling by The World Court in The Hague, whose authority it rejected in the past. The World Court said that the denial of consular assistance to the defendants, is in breach of the 1969 Vienna Convention, could have prejudiced their trials.

Despite its distaste for any international legal body or instrument that presumes to over-rule the United States Constitution, the Bush administration has now belatedly ordered a judicial review. About time !!!

Areas in which the United States government, or its agents, have traditionally assumed "legal immunity" when acting in the national interest, are also coming under international fire.

The American Civil Liberties Union, representing eight
Afghan and Iraqi former detainees, is suing the United States defence secretary Donald Rumsfeld, and three army commanders for allegedly ordering "the abandonment of our nation's inviolable and deep-rooted prohibition against torture or other cruel, inhuman and degrading treatment".

Like the Guantánamo Bay controversy, the lawsuit is based on the contention that abuses at Abu Ghraib prison in Iraq, and Bagram jail in Afghanistan, not only breached the United States Constitution, but also the Geneva and other United
Nations Conventions.

A legal precedent for holding top decision-makers, such as Rumsfeld, responsible already exists in a supreme court ruling that says that the most senior Japanese military officials were ultimately to blame for abuses of allied prisoners of war during the second world war.

A multibillion-dollar class action now before a Brooklyn MA court, has potentially even broader implications for United States adherence to international law.

The civil suit, brought on behalf of several million Vietnamese people, alleges that United States chemical companies, including Monsanto and Dow Chemical, committed war crimes by supplying the government with Agent Orange in the Vietnam war. The toxic herbicide was extensively used by United States forces, and is widely blamed for continuing birth defects, cancer and other serious health problems in Vietnam.

The companies have argued, in effect, that they were only following orders. But Judge Jack Weinstein suggested a parallel with Zyklon B, the gas used in Nazi death camps. Two Zyklon B manufacturers were convicted of war crimes and executed by the United States and its allies after 1945.

The United States Justice Department has decried the Agent Orange lawsuit as "dangerous" and "astounding". A government court submission said; "The implications of the plaintiffs' claims would, if accepted, open the doors of the American legal system for former enemy nationals and soldiers claiming to have been harmed by United States armed forces."

Yet, it is precisely to avoid such chaotic scenarios that post-Iraq United Nations reformers want an agreed system of international rules, governing war and peace.

At the Royal Institute of International Affairs this week,
Philippe Sands QC, suggested that the nomination of the hardline unilateralist John Bolton, as United States ambassador to the United Nations might further encourage America's "disregard" for international law. Sands warned that many in Washington remained committed to "re-making the international order to suit American interests and American values".

But as human rights law continues to develop beyond the reach of executive power, the future waging of unjust or illegal wars could become an increasingly problematic and costly forensic business.

God Bless America - when it stops blessing itself!