Guatemala fights with riots and strikes against the Free Trade Agreement

For about one week the economy of Guatemla has practically been shut down by strikes. And there is no end in sight. Primarily the protests are against the ratification of the central american free trade agreement CAFTA with the USA. But many people in Guatemala want to also bring down the neo-conservative government. 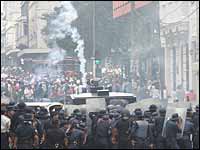 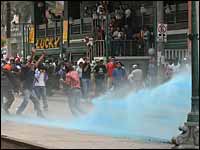 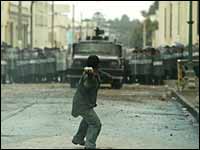 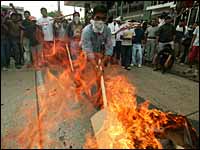 The Central American country at present probably experiences one of the largest protest wave since its existence. For the first time extreme left and right wing groups link up with each other to bring the government down. Still the communists do not demonstrate together with the rightwing radicals and paramilitaries. But there are probably secret arrangements nevertheless . While the teachers, trade unions and farmers' associations closed down the country by means of strike for approximately one a week, the extreme former paramilitaries are planning to shut down the country on Thursday, when the social groups and movements plan to have a break for one day.

But since last Tuesday the secret arrangements could become endangered.
In the northwestern city Huehuentenago policemen and soldiers opened the fire on strikers, who blocked the Panamericana road. A 24 years old teacher and father of five children was killed by headshot. Six more demonstrators had to be brought into hospital with shot wounds, others suffered injuries by baton wounds and teargas. The protests intensified because of the rage about yesterday's attack.

Also the police announced brutal encroachments and many injured in the capital.
Meanwhile the president Oskar Berger announced his intentions to arrest the trade union and farmer leaders.

These same ones met last Tuesday first of all with the archbishop of Guatemala city and the vice-president to find a peaceful solution. Without success. The meeting ended with a dead line to the government: Until today at 3 o'clock pm local time (22 o'clock MEZ) the Minister of the Interior and the head of the police must be dismissed, the president must assure in writing that last monday's parliamentary ratification and last tuesday's free trade contract signed by the president does not become enacted nor published in law.

In addition up to then all policemen and the soldiers must be withdrawn from the roads of the country and a disputed law about mining must be annulled.

If these demands are not fulfilled, the violent protests are to go further. It is not expected that the president OSCAR Berger will fulfill the demands. Then on Thursday there might be a strange set of demonstrations. Teachers, landless and small farmers will associate with extreme right wing paramilitaries, who also want to likewise put the country with road blockades to a standstill. They demand reimbursements for their long time services they "performed for the government" during the civil war.

If the neoconservative president Berger will fall due to the protests, a successor is not in sight. Guatemala has no charismatic politician with presendential abilities.
And although the right- wing extremists are the dominant group in the parliament, over 80 per cent of the people of Guatemalta reject their party leader, the ex-dictator, the 86 year ols Efrain Rioss Mont. The left seems at this point insignificant in the parliament and the conservatives are split in infighting. But the majority of the people of Guatemalta agrees only in one point:

The government must go.