Photos of the section 13 and 14 notices which were plastered around Derby city centre today. 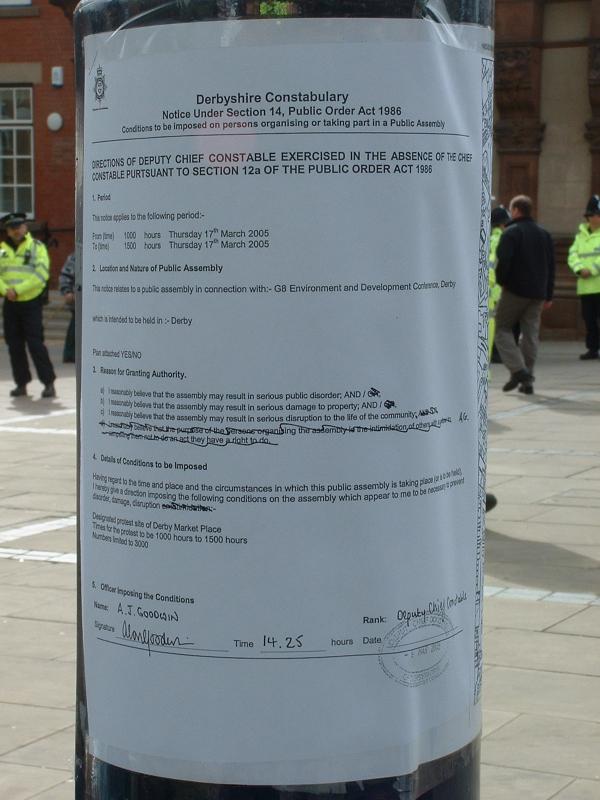 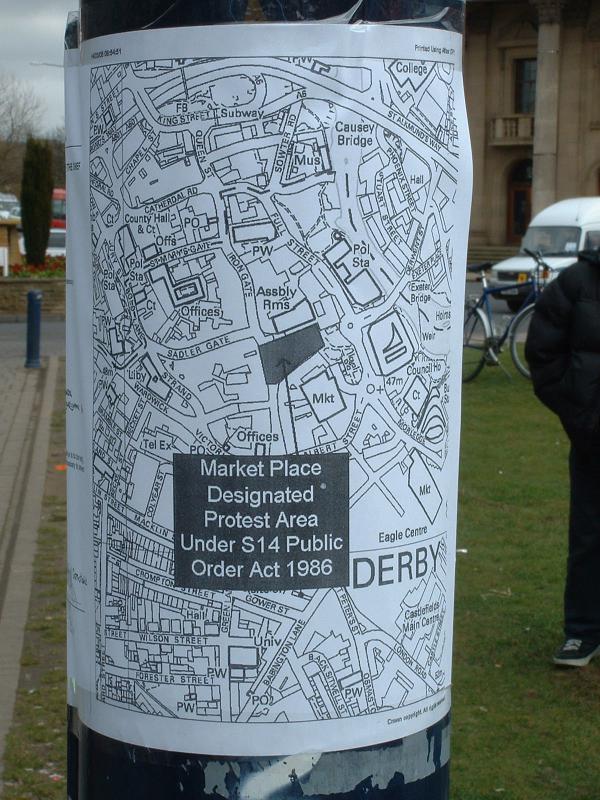 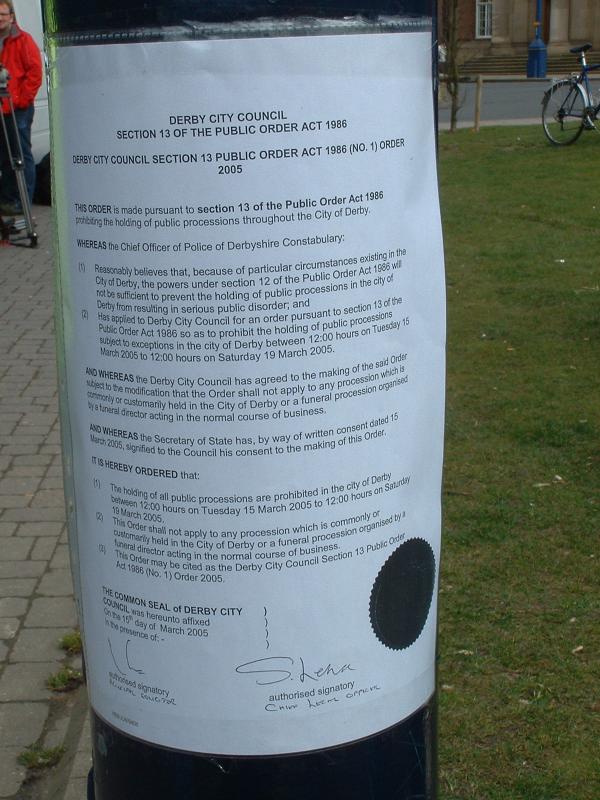 The policing was totally over the top today and protestors were only allowed to assemble between 10am and 3pm in the Market Square.

According to the local rag there were "A thousand officers from 23 forces" and "policing the event was expected to cost between £1m and £2m", since there were perhaps 100 protestors it cost around £20,000 per protestor...

over the top policing / wheelchair discrimination

The policing was mad today.

I thought some people might agree with me in using their own tactics - i.e. "the Law" - to protest about this. I've written a cheeky letter to the Chief Constable accusing them of discrimination under schedule 3 of the Disability Discrimination Act, 1995, as they wouldn't let me take part in the Critical Mass in my road-racing wheelchair.

I also asked for copies of all film evidence taken of me and suggested that as it was impractical for me to write to all 23 forces that the Chief Constable might like to co-ordinate the response :-)

And I lambasted them for their waste of tax-payers money.

I bet I get a letter in about a month ignoring what I have said :-)

Well I issued against Derbyshire Constabulary in court the other day. This is after a month and 11 days or so of my original complaint, two letters from me (the second saying I would go to court within 7 days if there wasn't a full response to my complaint). I had not had a response to the issues I raised under disability discrimination.

After it got issued I let them know by fax. Surprise surprise a fax back today from the Derbyshire force solicitor (hello, I gather you are reading this!) They quoted my message above (obviously been watching these boards!) and told me they would use it in evidence particularly as it relates to costs - i.e. they think that they will get higher costs as I've posted my comment above.

Top quotes from the police

"the Defendent's police officers were not providing a service to the claimant or to the public" - well I tend to agree that they didn't provide a service to anyone ! but surely that is all they are supposed to do, to provide a public service?!

"but were discharging their duty to preserve the Queen's peace" - if I knew it was the Queen's I wouldn't have bothered to keep it.

"1000 police officers were engaged to police the said event... at 10:20 (the Chief Inspector) attended the railway station and spoke to a group of approximately 40 persons... (who) wished to engage in a "Critical Mass" demonstration"

They go on to say that they only allowed cyclists to take part in the demo as a cohesive group would be easier to control, cyclists have limited abilities to disperse or engage in acts of disorder, and cyclists attending demonstrations are less likely to intend to commit acts of disorder than people on foot. What this has to do with discrimination against me as a wheelchair user I don't know. What do they think I was going to do - run over their toes? :?