OutRage! backed the call for “Britain and the US to set a timetable for the withdrawal of troops,” but it opposed calls for “Troops Out Now”; warning that “a hasty withdrawal could pave the way for the seizure of power by Saddam loyalists or Islamic fundamentalists.” 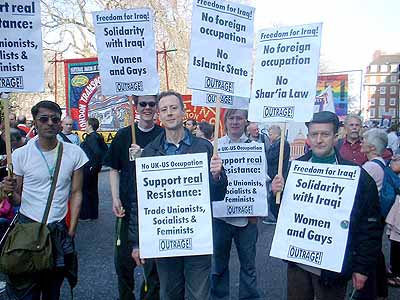 No foreign occupation! No Islamic State!

For a secular, democratic Iraq – Against clerical tyranny

OutRage! backed the call for “Britain and the US to set a timetable for the withdrawal of troops,” but it opposed calls for “Troops Out Now”; warning that “a hasty withdrawal could pave the way for the seizure of power by Saddam loyalists or Islamic fundamentalists.”

“If the Saddamites or Islamists won power, it would be disastrous for democracy, human rights and social justice in Iraq,” said OutRage! spokesperson and demo participant, Peter Tatchell.

“Most Iraqis don’t want foreign occupation, the return of the Baathists, or the clerical tyranny of Islamist rule.

“The biggest danger to Iraqi freedom right now is the imposition of a theocratic state, along the lines of neighbouring Iran, where an estimated100 000 people have been executed since the Ayatollahs seized power in 1979.

“The Islamist parties in Iraq are pressing for the introduction of an Islamic constitution and Shar’ia law, which would result in the execution of women who have sex outside marriage, gays and apostates, he added.

“Women who refuse to be veiled have been murdered. So-called honour killings of women are encouraged by the Islamists. Feminist campaigners have been threatened with death. A hugely popular woman singer and dancer, Hinadi, was recently assassinated by the Islamists in Basra. Gay Iraqis live in fear of execution by Islamist militants.

“We support the call by progressive Iraqis for the separation of religion from the State; and for a democratic, secular constitution that guarantees political and trade union rights, free speech and freedom of the press, and equality for women and gay people.

“OutRage! salutes the courage of Iraqis who are battling against foreign occupation, privatisation and clerical misogyny and homophobia. Their campaign for a liberal, humanitarian Iraq is heroic and inspirational,” said Mr Lock.