Photos from the "19.3" march and rally held on the 19th March 2005 in London, called by Stop the War Coalition, CND and MAB. Includes a montage of many of the mass-produced placards being carried, individual photos of some of the more creative ones, and the largest samba band I've ever seen. All photos are copyleft - if you like it, go ahead and re-use it!

There was this much security at the US embassy ...

... to protect them from this? 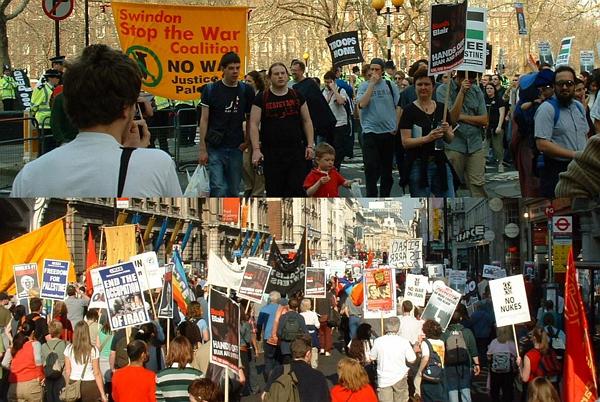 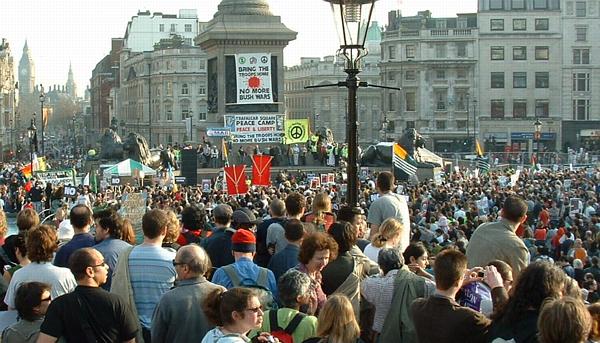 I got a good view from here 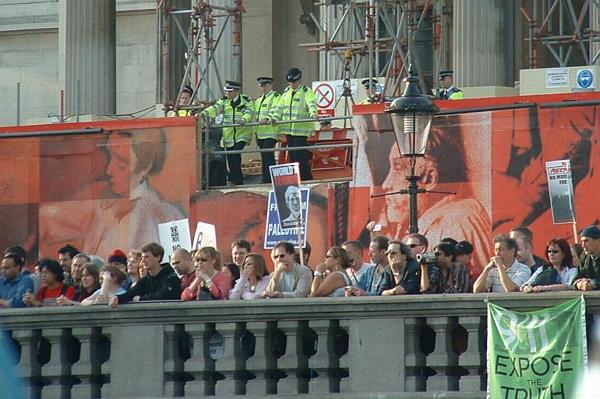 But the police had the best observation position 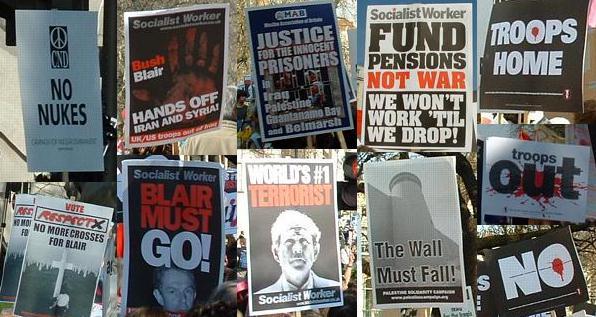 Mass produced placards were in the majority 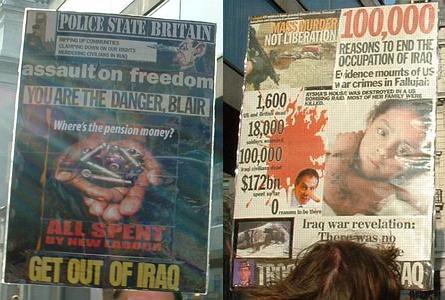 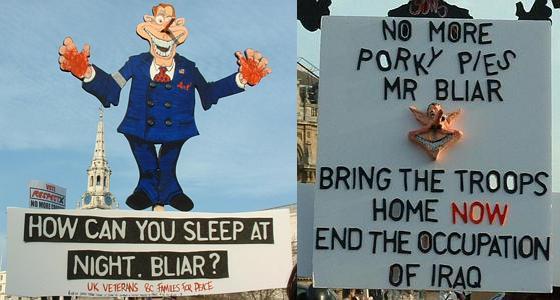 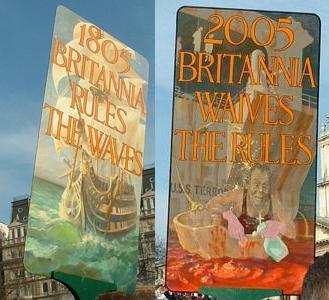 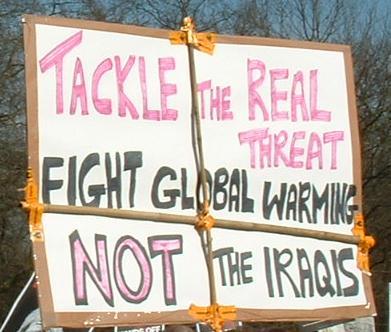 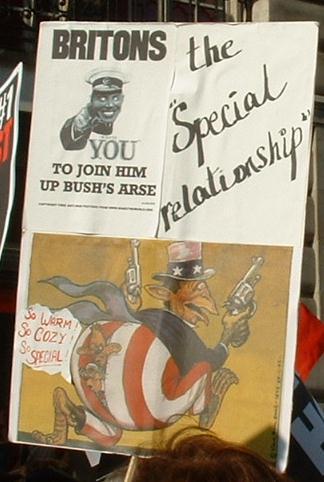 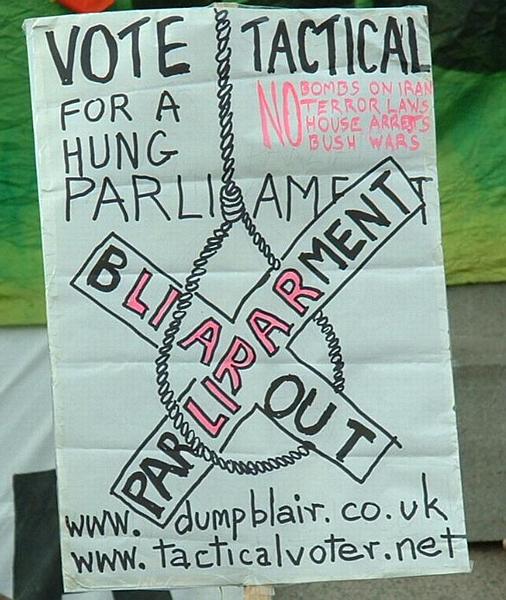 Vote tactical for a hung parliament 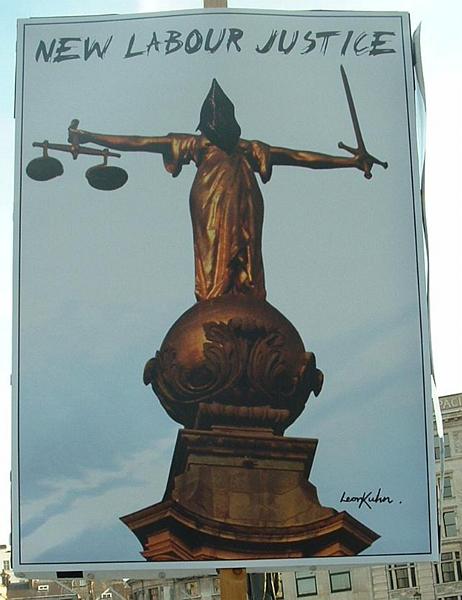 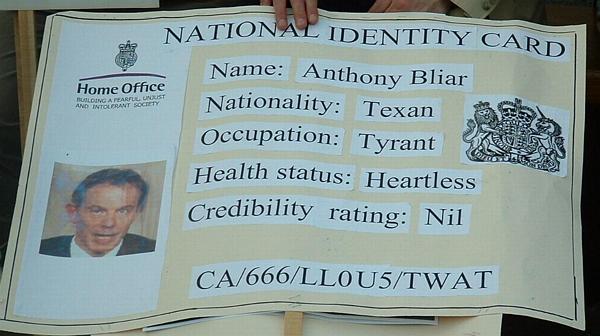 Due to traffic congestion from a motorway accident, the Swindon coach arrived in Hyde Park at 1:30pm, half an hour after the march was due to leave (or start leaving), and we discovered that the march was still leaving Hyde Park - I took this as a sign that this demo had attracted enough people to reach a respectable size. Observing that the weather was very agreeable for the time of year, we joined the people filtering out of the park in the direction of the US Embassy.

The route of the march went round three sides of Grosvenor Square, but not the side that the embassy was on. The Embassy itself was on the other side of a concrete barrier, a ring of police, a ring of portable steel fence, another ring of police, another ring of steel fence...... Paid for out of our taxes, said another photographer who was also contemplating this scene. The layout of this part of the route almost seems to have been designed to preserve the park in the middle of Grosvenor Square as a kind of front garden to the embassy, so that the embassy staff can come out and eat their lunch in the park without having to cross a road full of inconvenient protestors.

At the corner where the march left Grosvenor Square, there lay a coffin with the message "100,000 dead" painted on it. Even this was kept safely outside most of the security rings.

When the march reached Trafalgar Square, I finally caught sight of the samba band which I had been hearing for most of the duration of the march. A really big samba band, probably the biggest I've ever seen all playing together, maybe 100 of them. Or is it two samba bands? There seem to be two mestres, who are both busy making different signals to the sambatistas around them, but somehow they're all in time and playing something coherent, and it sounds fantastic. I'll try not to worry too hard about how it's done, I'll just be grateful that there are so many people willing to do it.

Hard to say how many people attended the demonstration. I'm sure I heard someone proclaim from the platform that there were 150,000. Later on the Beeb I read counts of 45,000 according to police and 100,000 according to organisers.

Corporate media coverage:
Erm, there doesn't seem to have been much yet.
Independent web site? Nothing
Guardian web site? Nothing.
The Observer (paper version)? Yes, there's a photo on page 2, and the text:

"Yesterday, two years after the start of the US-led invasion of Iraq, thousands of people took to the streets to mark the anniversary. Police estimate that 45,000 protestors demonstrated in London. There was also a march in Glasgow and vigils elsewhere in Scotland."

And the photo isn't even in colour!

And a few voxpops with a photos of somone by each one:

This last one is a bit odd, because it opens with a picture of a woman in a t-shirt saying "bring the troops home", but the quote alongside it says "If the soldiers left now then that would make things worse in Iraq. It would be complete anarchy. I’m here to show solidarity, and to make them think twice about invading Iran. The government’s got such a large majority they feel they can do anything. This is the only way we can show dissent."

A cock-up at the Beeb maybe?

Meanwhile, the coverage here on Indymedia:
pics and locations of other demos:

And no doubt more on their way.