The biggest police operation [ 1 | 2 ] since the 1984-85 miners' strike was mounted in Derby to protect a G8 Environment Ministers Meeting between 15 and 19 March 2005. This involved orders under Section 13 of the Public Order Act to ban the holding of "public processions through the City of Derby" (funerals were exempted) for five days and then under Section 14 a protest was allowed on the 17 March which involved a "designated protest site of Derby Market Place", a time limit and a maximum number of 3,000 protestors.

Events on M17 started with a Critical Mass bicycle protest in the morning with around 40 people taking part, police arrested twelve cyclists, who were released on bail that night, however their bicycles have been kept "as evidence".

Around 100 protestors then gathered in the only place they were alowed to — the Market Place — and spent the afternoon hanging around, listening to some samba, eating snacks from Veggies and watching Bush and Blair get pied. The point of the protest was explained by a representative of Friends of the Earth, "We're trying to take this opportunity with the G8 Environment and Development Ministers meeting just outside Derby to send a direct message to those ministers, particularly about the rhetoric that's being used in terms of climate change, and actually trying to encourage them to take action rather than just talk about the issue — and also to stop pumping our tax-payers' money into new oil developments and actually look at real solutions to climate change."

The G8 Justice and Home Affairs ministers are due in Sheffield between 15 to 17 June 2005 and Sheffield Dissent has a g8-sheffield email list to discuss what protests might be organised — now we have an idea of what to expect... 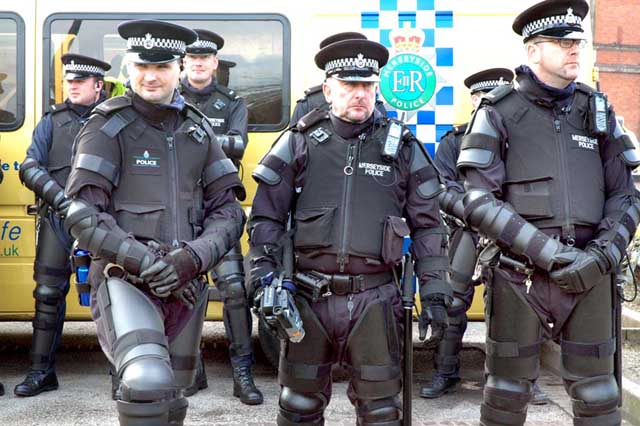