A few hundred Palestinians, Internationals and Israelis peacefully marched today from Bethlehem to the checkpoint which separates the city from Jerusalem, protesting enclosure of the city and the continued occupation. 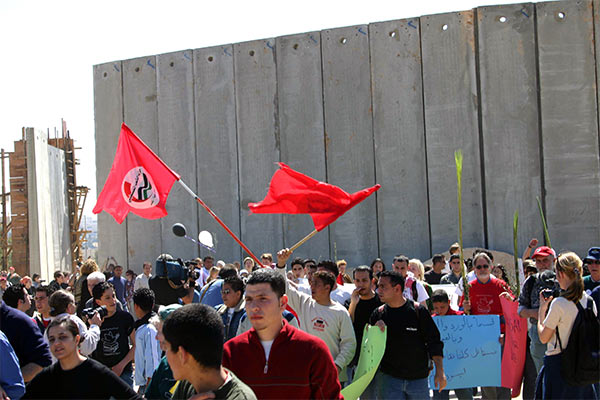 Palestinians and internationals marching through the gap in the Wall, Bethlehem

Organised by a coalition of non-violent resistance groups, the residents of Bethlehem marched on Palm Sunday to bring international attention to the unjust, Israeli-imposed restrictions on access to Jerusalem and its Holy Sites.

A press release from the Holy Land Trust (HLT) and the International Solidarity Movement (ISM) stated: “Since 1990, Palestinian Christians and Muslims are prohibited from entering Jerusalem, which deprives them the basic right to worship in the Holy City.”

Marchers carried banners, flags, and olive branches to symbolize peace, and called for an end to closure of their city. They chanted in English and Arabic. One placard read: “Jerusalem is for all of us!”

Husam Jubran, of the Holy Land Trust, an organizer of the march, said:

“We’re protesting for many reasons. This is to send a message to the world to say we’re still living under occupation and still we’re living under structural violence; by-pass roads, fences, checkpoints, walls and settlements.”

“We’re sending a message to Israelis that there is a chance for a just peace; that this is the time for peace.”

“We want also to increase the non-violent resistance to the occupation in Bethlehem,” he added.

George Rishmawi, of the International Solidarity Movement (ISM), also an organizer of the march, said they were marching to say one thing:

“That what is happening – the building of the wall and the fence which is imprisoning the Palestinian people in their own land – will not bring about peace or security. It will only increase isolation and hatred.”

“We say to the soldiers that they have a choice; to put away their guns and join us in our quest for peace.”

Anton, from Beit Jala, managed to get special permission to go to Jerusalem for Easter celebrations. But he wanted to protest against the Wall and the separation of Bethlehem and Jerusalem, “to do something!” he said, reflecting the feeling of powerlessness often expressed in Bethlehem: “In the time of Jesus we didn’t have a wall,” he added; “Today we have a wall.”

Omar, from Bethlehem, said: “It’s important for people of multi-faith backgrounds to reclaim religion in the name of non-violence in their resistance to oppression.”

Chrissie and Tim, from the Mennonite Central Committee (MCC), in the US, said: “We’re here in Solidarity with Palestinians in their non violent resistance to the occupation. The MCC works that way around the world; by supporting local initiatives for peace.”

Joseph, an Israeli from Jerusalem, said: “I’m here in solidarity with Palestinians to resist non-violently against the checkpoints and to resist confinement into enclaves.”

Bex, from the UK, also marching in solidarity, said: “It’s just not fair that people can’t walk to and from Jerusalem if they want to. It’s the spiritual, historical, and economic capital for Palestinians.”

The protesters marched through the narrow gap in the wall on the road leading to Jerusalem, and were then stopped by armed soldiers and military police at the checkpoint. A statement was read to the soldiers after the crowd sang “We Shall Overcome”, and chanted, protesting non-violently against the occupation and closure.

We in the Bethlehem community have come to you today with a message on behalf of our people. We represent the family members and friends who are imprisoned by these concrete walls and wire fences that now create the Bethlehem open-air prison. You, like the prison guards, control our freedom and ability to live as human beings with dignity in this holy land.

Our strong delegation of civilians comes to you without weapons but with great strength and commitment to deliver the message of just peace. In the name of security, you do not permit us to travel to work, to school and to worship in our holy sites in the city of Jerusalem. Your government deprives us each day of basic human rights to self-determination. Each day you keep us from being with our families at weddings, funerals, graduations, birthdays, and religious holidays. Although Al Quds [Jerusalem] is only 20 minutes from Bethlehem, we have not been allowed to pray or worship at our holy sites.

Each day as you come to our city, you serve the system of violence that keeps our people imprisoned and without the ability to live a life of normal human being. With your guns, tanks and insults, you teach our children to hate.

However, we believe each of you has the power and choice to choose a different ending to this story. We appeal to your conscious and humanity as individuals and as soldiers who may feel there is no way out of this system. Put your guns away and join us in the fight for peace and freedom.

The People of Bethlehem.”

This powerful statement, read with passion, raised a loud cheer and applause from the marchers, who left the checkpoint peacefully, having got their message to the soldiers and to the media who were present. The soldiers watched as slogans and messages were painted onto the wall, and the Palestinian shibaab (youth) behaved with dignity as the soldiers pointed their guns at the crowd and their jeeps followed at close distance.

There were no arrests or injuries, and the organizers agreed it was a success: the media were there and a powerful message was sent. This was also a precedent for the Bethlehem residents: the organizers are hopeful that this successful, peaceful direct action will encourage larger participation next time around: “We’ll be back!” said one protester; “tomorrow!” said another…

“Next time, insha’allah (god willing), there will be more people. This was a success because we showed the press that we can demonstrate peacefully…. Next time more people will want to join us,” said George Rishmawi.

A small but important step forward was taken for the Bethlehem non-violent resistance movement. We hope to see coverage of this demonstration on the news, so that the world can hear our voice from the Bethlehem ghetto.