This is a 1,500 word with 11 photos of the trip made to Baghdad by Susan Karim in March 2005. Susan organised two sponsored walks for Iraqi orphans in 2003, the first from Dundee to Edinburgh and the second from Edinburgh to Glasgow. She went to Iraq in 2004 and again this year. 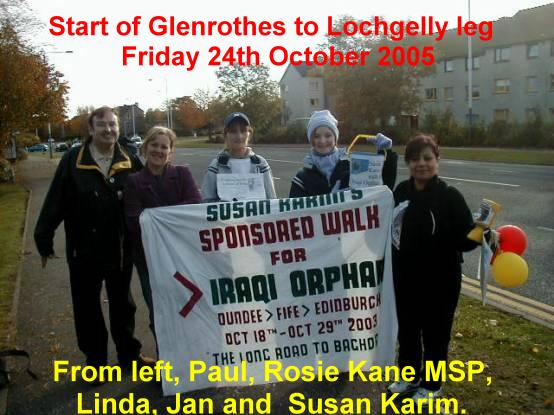 Start of leg from Glenrothes to Lochgelly on Friday October 24th 2003. 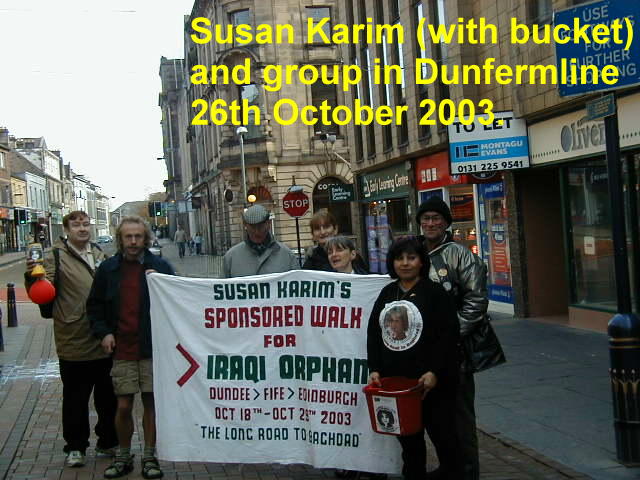 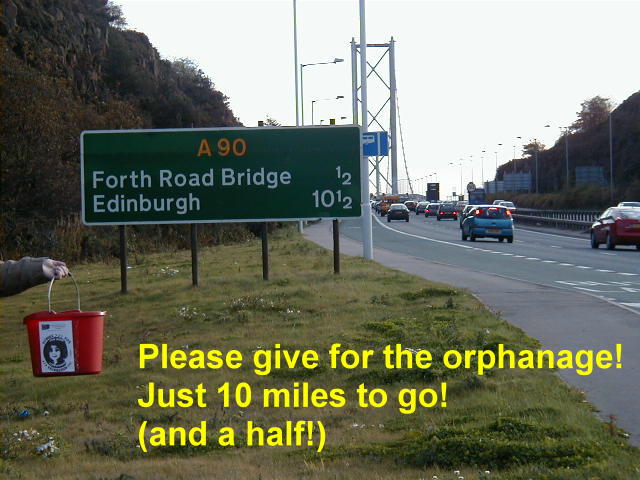 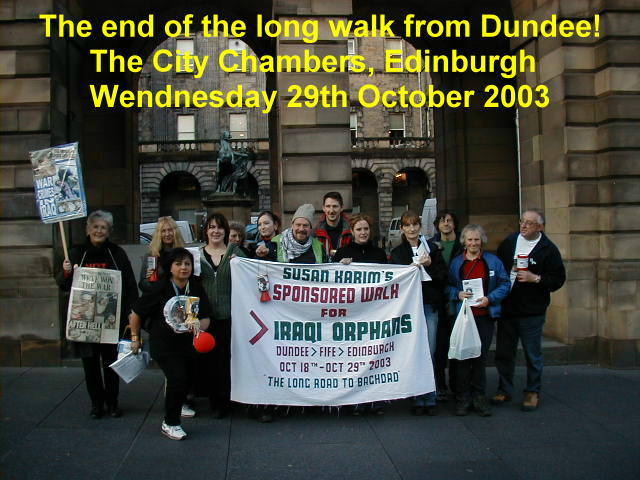 The end of the first walk. Outside the City Chambers, Edinburgh. 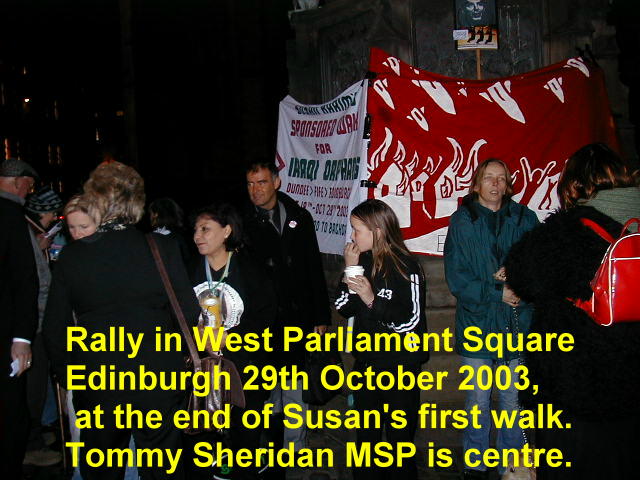 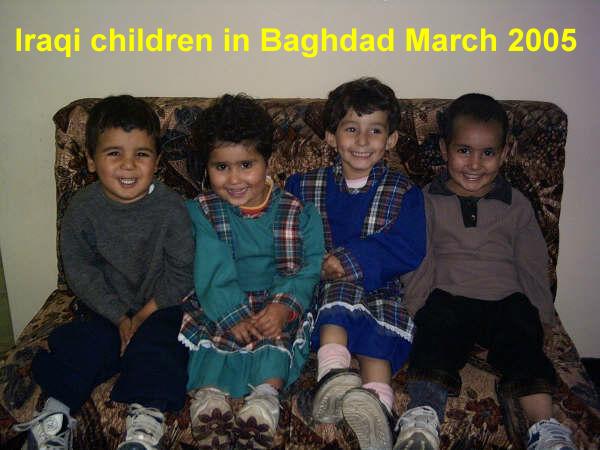 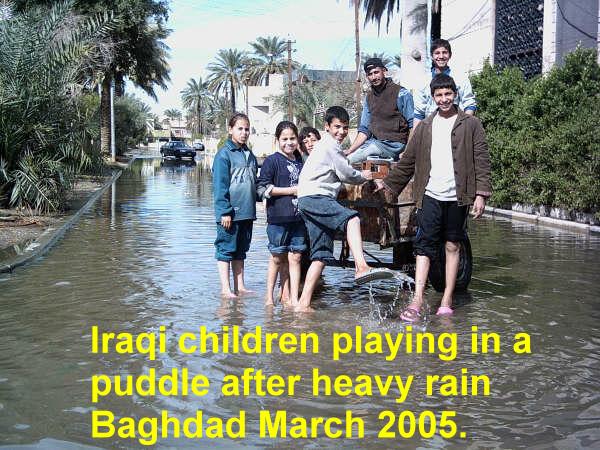 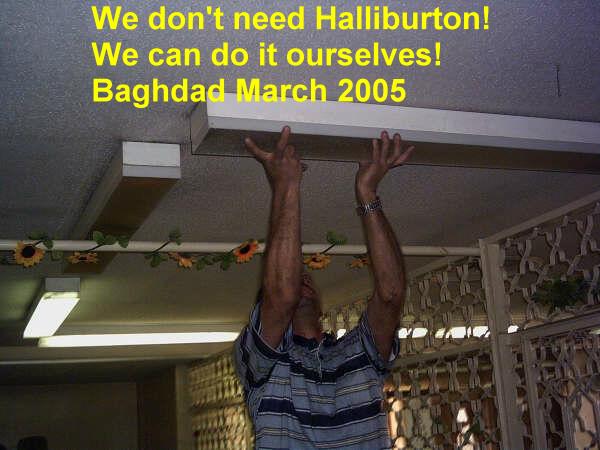 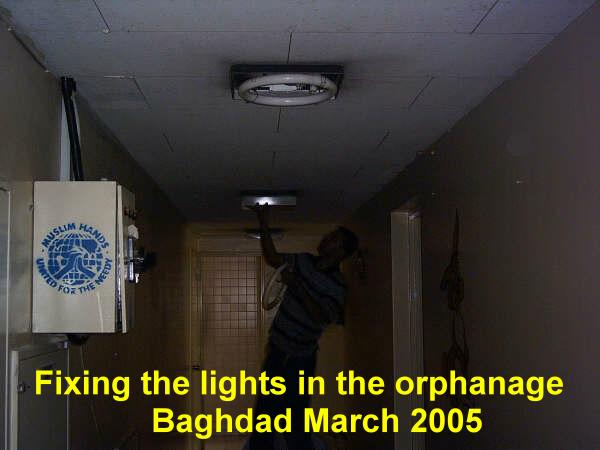 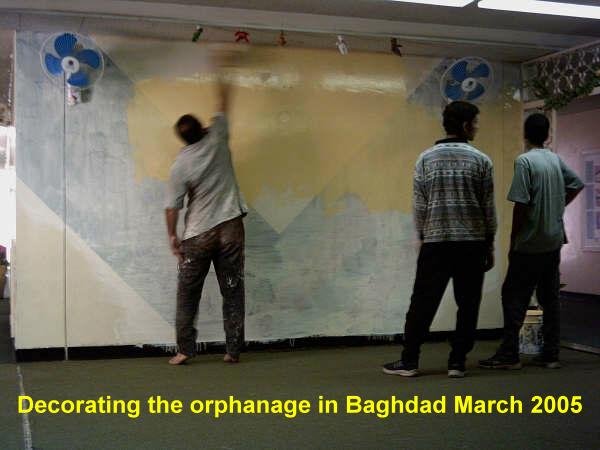 Decorating the orphanage in Baghdad March 2005. Susan Karim, an Iraqi Scot who has lived in Scotland for 25 years, returned from a week in Baghdad on Thursday 17th March 2005. Susan did two sponsored walks in Scotland, one from Dundee to Edinburgh and one from Edinburgh to Glasgow to raise money for Iraqi orphans.

Susan Karim’s first sponsored walk for the Al-Salek orphanage in Baghdad finished with a closing rally at West Parliament Square in Edinburgh on Wednesday 29th October 2003. The walk had started on Saturday 18th October 2003 at Dundee [Scotland’s fourth largest city] and the 90 mile route took in St Andrew’s, Cupar, Kirkcaldy, Glenrothes, Dunfermline, Inverkeithing, Cramond and Leith. The final Wednesday’s section of the walk was from Leith library to the City Chambers on the Royal Mile where Edinburgh Labour councillor Gordon Munro entertained us in the Dunedin room. Opposed to the war he expressed solidarity with Susan’s walk and quoted Albert Camus: “Real generosity to the future lies in giving all that you can to the present.” He said that Susan exemplified those sentiments in all that she had done on the walk.
Susan told the assembled group of around twenty that she had been overwhelmed and touched by the generosity of ordinary people. She spoke of a homeless man who gave her his whole day’s takings saying that the Iraqi people needed the money more than he did. She said that his photo should be in the paper and not that of Iain Duncan Smith! (Former leader of the British Conservative Party)

Her second walk was from Ocean terminal, Edinburgh to central Glasgow via Falkirk over Christmas 2003 and New Year 2004.

Her two walks raised £17,000 (about $32,000) for the orphans. She visited Iraq in March 2004 which was her first trip there for 24 years! She was dismayed then to find that reconstruction had barely begun then and now the situation seems even worse this year.

Susan couldn’t go by taxi from Amman like last time - that was an absolute no, no, no! Susan also said that Iraqi airlines are using second hand airlines – she counted 11 huge airplanes at Baghdad airport not being used.

When you get to the airport it seems nice but you feel it is very militarised. Nobody talks to anyone and there were lots of men with heavy guns and she says, “I mean heavy guns.” The luggage is searched in a tent outside and sniffed by dogs. The journey from the airport is hair-raising and declares Susan, “ I mean hair-raising!”

I told Susan how I had thought about going to Iraq, and how Robert Fisk of the Independent advised strongly against it. Susan concurs, saying, “Don’t ever, don’t ever, unless you are willing to have an interpreter with you and you are deaf and dumb. You are not allowed to take photos at any place at any time.”

Susan was disappointed to find that the infrastructure of Iraq is still in ruins some two years after the war. The water supply in Baghdad is still not fixed, for example last Thursday (10th March) there was very heavy rain and it caused flooding and schools to close and children were using the puddles of water as swimming pools. The electricity in her sister’s house at which she was staying was intermittent at best. This is in a relatively affluent area and while she was there Susan couldn’t even have a shower. Can you imagine what life is like in a poor area like Sadr City? The security situation is dreadful - there are still car bombs, mortars, checkpoints etc.

Susan took her digital camera but was only able to take photos inside. She went to see the orphanages that she raised £17,000 for on her two sponsored walks in Scotland. There are more street children than last year and a greater need for orphanages. Apparently there is child trafficking and children as young as 11 or 12 have been sold in Baghdad. In addition to the five orphanages that Susan has been helping she visited a women’s association where she made a donation of a fridge, cooker and a PC. There are hardly any women in the street as it is so dangerous.

There is a lot of fruit and vegetables in the shops but people don’t have the money to buy them. Reconstruction is virtually non-existent though the petrol queues are shorter than they were. The petrol stations are open longer but are heavily guarded.
Car bombs go off all over the place including one that went off in the college of dentistry, which no one can understand.

The government, looking after its own, gets things specially flown in from Dubai. The administration and its advisers live in a fantasy world called the Green Zone largely cut off from the harsh reality of life outside.

Overall the situation is worse, the electricity is in much poorer supply than last year. Even hospitals get power cuts of three hours or more a day and if a car bomb goes off in the neighbourhood then they may have no electricity at all. On the plane Susan sat next to a government engineer who said that the electricity has to be rationed. She said, “You have two huge rivers (the Tigress and the Euphrates) and many dams and all the gas and oil on earth, so why the problem?”
The answer he gave was that people had more electrical gadgets than before, more air conditioners, and DVD players, TVs etc and said, “We can’t supply the extra demand.”
What he really means is Halliburton must do it. The local people have offered to fix the electricity free of charge but the occupation refuses. Overcharging Western contractors must do the work so the electricity remains broke.

Returning to Baghdad airport from the suburb of Dorah (a distance of 20km or 12½ miles) she had to wear a special badge and go through 11 (!) checkpoints in an armoured vehicle. What she found annoying was that the American soldiers were more polite than the Iraqi security forces. The Iraqi police are reminiscent of the old days under Saddam. The overall state of affairs is much worse than on her last visit - half the days she was there this time she was woken by the sound of a car bomb

Susan was disappointed that she couldn’t go to the holy city of Najaf. People feel less secure than before, last year she was able to go out every evening for a meal but not this time. She DID go out on one occasion and was in a group of five in a restaurant that could hold 300 people – there were more staff than customers. Also, there is a state of emergency with a strict curfew in Baghdad from 11pm to 6am. Outside of the capital it is virtually impossible to get in to the cities of Samarra, Fallujah and Tikrit even if you are a resident.
Susan is keen to talk about her experiences. She had her camera but was not able to take many pictures with it, as officially you need a permit.

On her return to Edinburgh airport a `welcoming committee` who gave her the third degree greeted her. Three security men questioned her in front of everyone asking her silly questions like: “Why did you go to Iraq? How often do you go to Iraq? Who did you speak to when you were there? Where is your companion? Are you a practicising Muslim? Do you pray every day? Do you go to the Mosque?”
Susan replied, “What has all this got to do with it?” and she said pointing to the letter of invitation from Muslim Hands, “there is the letter from my charity.”
A woman near here said, “I hope that you are not staying long here.”
Susan retorted, “Excuse me, I live here.”
They questioned her in front of the queue for 15 minutes, presumably to intimidate and embarrass her. The reception at Edinburgh airport was worse than in Baghdad.

It was quite a trip! Susan hopes to write a book and is looking for a publisher. She will be giving talks about her journey when she is rested but just for now she is one tired (but still very determined) lady!