Take a look at these pics and judge for yourselves the level of threat posed by the Brighton Blix blok. The imtimidation and coercion led to the police restricting the peaceful protest opposite Brighton arms dealers EDO/MBM to an hour under section 14 of the public order act. 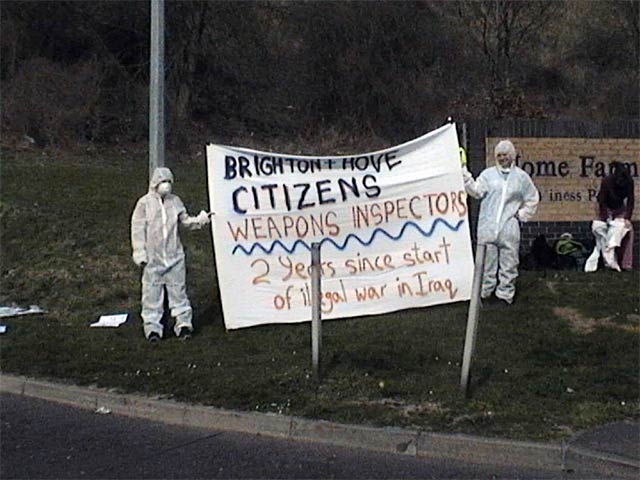 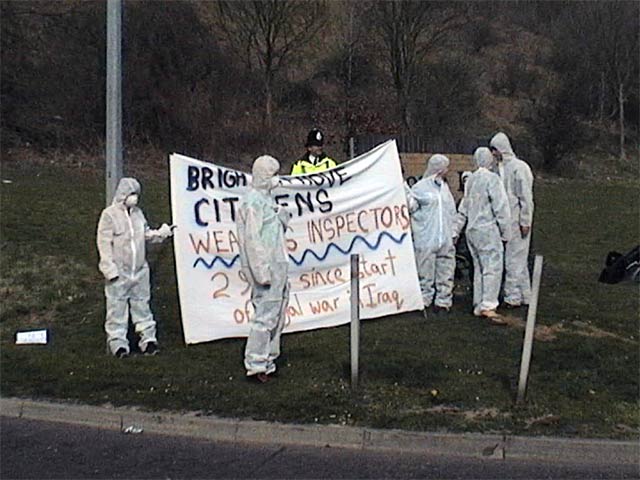 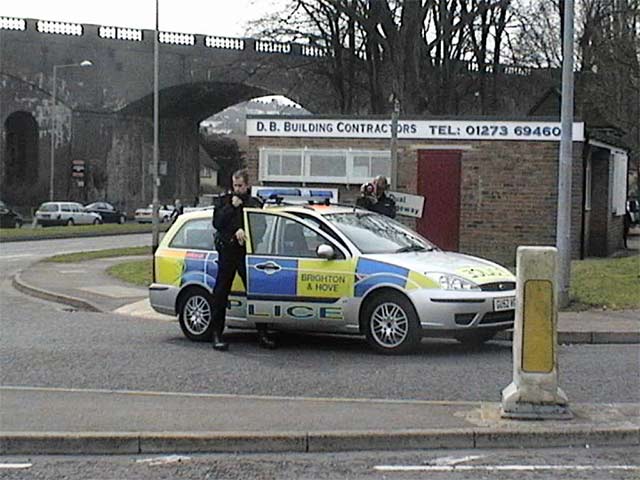 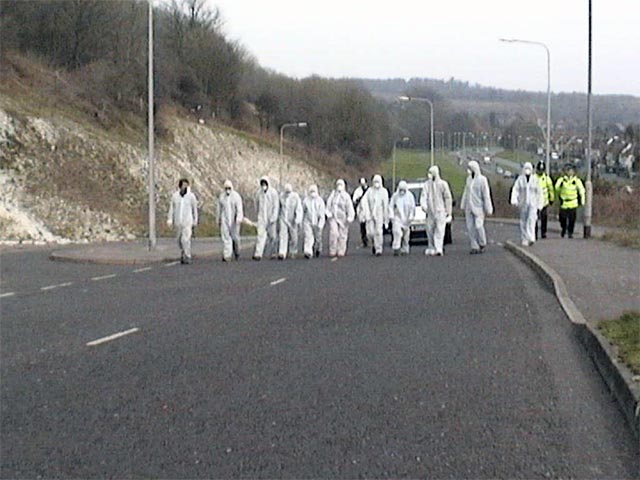 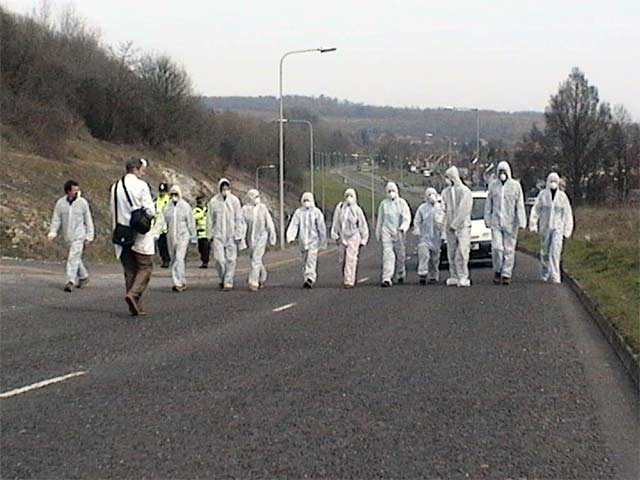 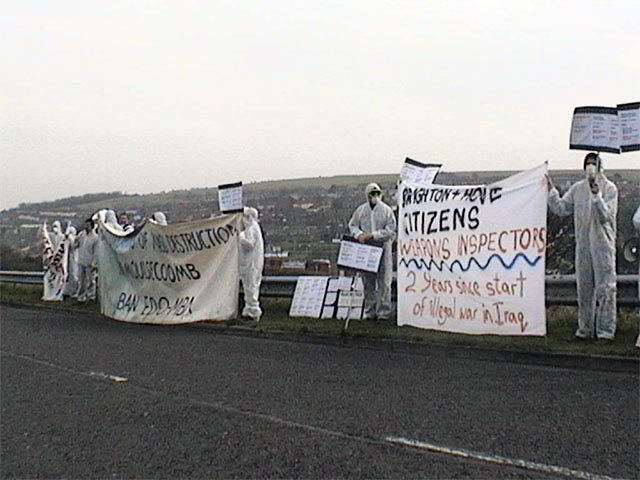 the intimidation and coercion 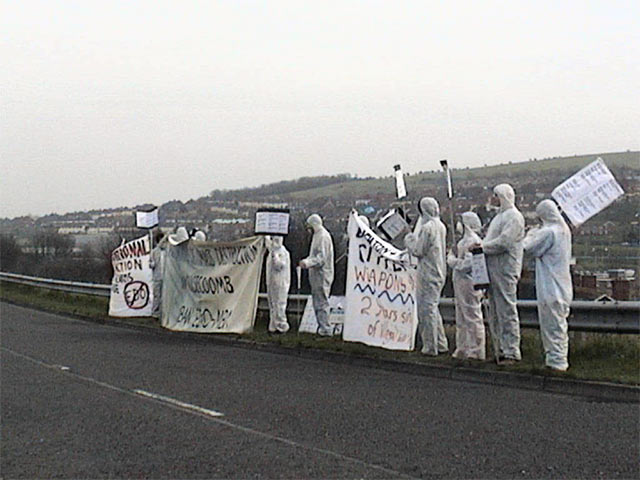 When the weapons inspectors requested an extension the police generously granted them an extra 5 mins. When this elapsed the 3 inspectors left were nicked and spent 10-12 hours in the nick. They were given bail till March 31st and bail conditions of Home Farm Road and the whole of the Wild Park.

Hey y;all, the demonstration yesterday was one of the most fluffiest actions that ive been on.
section 14 indeed!, the only justification that I can see were that we were wearing boiler suits and dust masks and as this was a publicity stunt find it hard to see that any charges will stick.

It is intimidation and we must stand our ground with this.

We do have the right to protest and as long as we stand our ground and perservere things will be cool.

When the inspector came back to issue me with a repeat of the section 14, as I hadnt been present at the 1st, I looked him in the eye and said "I dont believe for one minute that you have the slightest belief that us or our behaviour is going to lead to the conditions described in the section 14", "we are peaceful and on a grass verge out of the traffic and pedestrians, in fact it is one of the most peaceful groups I have been with in years of protest".
To this the inspector looked embaressed and nervous, the truth cuts through many things, even the hard veneer of police Inspectors.

following this I was arrested and stuck in a smelly, cold cell in the gulags of Hollingbury custody suite for 12 hours.

What I would like to say is the following, many people have spent 12, 120, 1200+ hours in custody, against injustice and to stand against repression, if we walk away just because a cop issues an order, esspecially when we feel strongly that we have the right to be there and in fact know the police order to be a form of intimidation, if we walk away at this time, we will not only be weakening our cause (the highlightening of the arms trade), but we will also be slowly giving up the few rights that we have, namely the right to peacefully protest.
It is important that we take a stand and challenge orders such as section 14, if we dont it wont be long before we are having our association together in places like Belmarsh or we find our selves electronically tagged.
Whilst I appreciate that some have there reasons for walking away from such situations, please dont walk away, just out of fear of the police, the end consequences that we face are much worse.

“The real threat to the life of the nation, in the sense of a people living in accordance with its traditional laws and political values, comes not from terrorism but from laws such as these” Law Lord Hoffman, 18 Dec 2004

Sagheer Hussain –Specialist criminal defence lawyer and representing Stop Political Terror (the group fighting for the rights of the Guantanamo and Belmarsh detainees).

The (local) Brother of a detainee in Guantanamo Bay.

(they would punish individuals for what they might do, not what they have done, the orders would include electronic tagging, restrictions on association, the use of phones and internet, and possible house arrest, any breach could lead to imprisonment).

Also an examination of whether or not the right to protest can be said to exist given the now extensive police powers over demonstration and direct political action.

Anti-terror laws have broadened the definition of ‘terrorism’

to include normal political activities, they authorize searches and even detention

in the name of ‘suspicion’ or ‘association’ with terrorism.

Entire communities live under a culture of ‘suspicion’.

and criminalized most forms of lawful protest.

George Churchill-Coleman, former head of police anti-terrorist squad during the 1980’s and 1990’s


Lastly those of you who like a good chat with the police on these demos, please take a walk with them and do it away from me.

The smiley friendly cop who stood amongst us for all of the demonstration was put there to do information gathering, as he was so warmly recieved by some of the people aned they chatted merrily away to him the police camera crew felt like joining the demo as well, had the bizarre situation yesterday of seeing the camera crew practically joining the demo and trying to film the private meetings that we were having, the camera was put centermeters from your heads, as you were discussing what to do.

dont tolerate this, talking to the friendly cop at the start and through the morning helps this.

You must make them feel unwelcome, do not welcome them, they are scum and are there to have you put in prison, as i have been in prison i know full well what this is like and maybe is why i feel so strongly about this, the only purpose for filming and talking to you is to incriminate you and ultimatly sentence you to prison, the nice smiles and friendliness are a front.

On good demonstrations, the police are made unwelcome and are made to go and stand away from the protestors, how can you converse with those who protect the arms dealers.

some of the cops present yesterday i have witnessed previously breaking the hand of a young women in Brighton and some of them are in fact complete psychopaths.

Over the past 4 years in Brighton I have seen many of the cops present yesterday,on various demos involved in varying acts of abuse.

whilst this post is a little vitriolic i agree with most of what is said. if you stand up to the police, especially in numbers, then you are far more likely to be left alone to get on with your peaceful protest. if people walk away then they risk leaving their friends or fellow protestors exposed and vulnerable. strength in numbers people

You have done a wonderful job today. Why do you hide your faces? What are you ashamed of? Wouldn't protests like this be more effective if the protesters didn't feel the need to hide behind the ever-so-boring and over-used masks and contamination suits?

Re. "Why the secrecy"

We do show our faces every Thursday and will continue doing so until the real criminals (probably includes you!) are driven out of Brighton. None of us are ashamed or secretive. We risk arrest and criminalisation everytime we go up there to demonstrate against people who are unable to question the morality of their involvement in the slaughter of thousands of innocent people around the world. Risking arrest demonstrating against those who can't think beyond their nice car, their next nice car and their promotion prospects.

So maybe you should examine some of the secrets in your soul and see where it leads you...

Re. Wolves in Wolves clothing(and smiling!)

Making this kind of comment on this page is surely counter-productive. Yes there are serious issues for discussion but a public forum like this, accessible to all, is not the place to do it. Especially when you're in a position to do it face-to-face. Maybe another case of careless talk. Publishing this kind of internal conflict only strengthens the enemy and also gives them information they can use against us. What does that achieve? On the other hand chatting about the weather to a policeman doesn't give that much away.

And yes there is strength in numbers but where are the fucking numbers on these demos. We're still waiting...

Those who fight and run way live to fight another day

Re. Wolves in Wolves clothing(and smiling!)

Whilst I wholeheartedly agree with your reasons to want to challenge the section 14 order, I do not feel they were warranted on this occasion. It was clear that the police were out to arrest us for any little reason and therefore we should have been doubly smart not to allow this to happen. If we had all allowed ourselves to be arrested and charged on mass, bail conditions would have been imposed preventing us from going up the factory to protest for many months. This would severely weaken this vital part of our campaign by reducing our numbers and possibly destroy it in that there would be no one left to protest outside the factory. Some of the people present yesterday are some of the most committed members of the group. EDO and the police would love these people to be excluded.

What's more, given the difficult situation we found ourselves in, the general consensus was to end that part of the protest at that time and effectively continue it at the end of the road where we could attract maximum publicity. I can assure you that people did not walk away out of fear of the police or because they are any less committed to civil liberties than you. Your actions yesterday put us all in jeopardy of arrest.

In future, anyone who chooses to get arrested please bear in mind other people's views as to how these protests are to proceed.

Don't you Inspectors have an e-list?

That way only *some* of the cops get to read about your group dynamics.

Hurrah for the Smash EDO campaign - you're doing sterling work!!!!

earlier articles suggest around 20 protestors, photo's kindly posted here reflect 12/13 protestors. Stop the bull shit and be honest with the numbers and the reports.

Re. can't count,can't be trusted

Whoa! Have to get up early to catch you out!

But hang on. What about the five people who weren't on this part of the action and the person taking the picture. And of course the person driving the white van with all the banners in.

But you're just too smart for us...no wonder EDO employ you with a sharp intellect like that.

Hey 20 20, only bullshit i see is the bullshit dumped on steps of Edo/Mbm.

oh yes also saw a bit in court coming from representatives of Edo.

Get a life, get a real job.