Should alleged terrorist suspects be shown on television side-by side-'terrorist training camp film clips' gathered by the government and media archives to give the wrong impression of accused people facing trial? 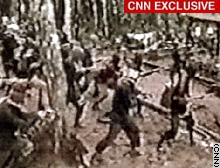 AUSTRALIA: Since the alleged war on terror the rights of those suspected have been exploited by mainstream television networks using archive footage of terror training camps that have no proven connection or link with the suspect, but just produce the propaganda necessary to have people believe that there may be some connection to the suspect.

Has any civil libertarian lawyer, barrister or researcher ever looked into the practice and is it lawful?

In my opinion this is a blatant contempt of our court because the accused has not been found guilty of anything, yet it appears that the file footage shown by the television networks is in fact part of the evidence against the accused person?

Give us your feedback

DOES THIS HELP THE GOVERNMENT MAKE THE DEFENDANT GUILTY EVEN THOUGH THE ACCUSED MAY NOT HAVE ANY ASSOCIATION WHATSOEVER WITH THE ARCHIVED FILE FOOTAGE?

Activities which include demeaning human rights and standards, detention without trial, undermining common law and the Australian Constitution and torture.

People used as pawns by the fascist Australian Government in its illegitimate war on liberty that allows it to pander to the US and go to war based on fear and lies. That propaganda also allows them to deceive the Australian taxpayers of their social dollars for military hardware.

Justice Hidden said the Crown did not allege that Ul Haque was a danger to the Australian community and acknowledged that he had ties to this country despite growing up in Pakistan.

Lawyer for Mr Ul Haque, Adam Houda, said he would strongly advise his client not to talk to Judge Bruguiere.

"That is the biggest joke I have ever heard. What authority has he got?" he said.

Lashkar-e-Tayiba - Blow Up or Beat Up

Pakistani militant group Lashkar-e-Tayiba has been branded a terrorist organisation by Australia, the US and Pakistan. It's been accused of being part of the al-Qa'ida network and of planning attacks in Australia. Guantanamo detainee David Hicks and French terror suspect Willie Brigitte are alleged to have trained with the group in Pakistan. Tonight, the first interview with Lashkar-e-Tayiba spokesman, Yahya Mujihad, since the group was banned in Pakistan over two years ago. The interview was conducted by Pakistani author and journalist, Amir Rana. Melanie Morrison reports.

YAHYA MUJIHAD, FORMER LASHKAR-E-TAYIBA SPOKESMAN (Translation): Even when I was the spokesperson for Lashkar-e-Tayiba I stressed that the organisation was not involved in activities, including international activities we are limited to Pakistan only in legal activities.

YAHYA MUJIHAD, (Translation): I want to clearly tell you we do not have our network in the Western world including Europe and America. It is just propaganda of India. Instead of listening to the Western propaganda we need to listen to the facts, we are quite confident that if you go to any court of justice we can prove that we do not have any sort of involvement.

Check out the transcript: