Eric David Stein critiques Scott Ritters latest comments on the neocons
and the possibility of a terrorist attack in the US, suggesting that 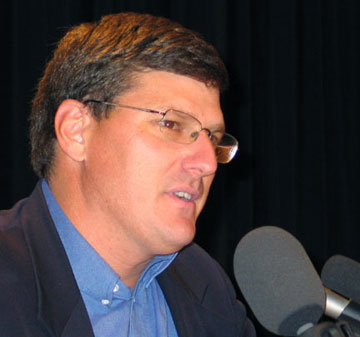 When former Marine and UN inspector Scott Ritter "waged peace"
in late 2002, the war party panicked. They pried into his finances.
They tried to block him from traveling. They tried to impugn his
patriotism and his integrity with every "black box" trick at their
disposal. They chided him as the "next Jane Fonda" and speculated on
what he would name his exercise video.

When asked that by a reporter, he responded that they should ask him

that to his face,and make a video called "Scott Ritter Kicking Their

Ass". None of the pundits took him up on the offer.

Nowadays, they indignantly protest that Scott contributed an
article to al-Jazeera, as if there was something wrong with
communicating with the Arab world through it's own media. Certainly
cable news has not been putting him on the air lately. That may be

related to the fact that most of his projections have been correct, and

making themselves look like the shallow sloganeers they are.

Fortunately, Ritter has been active in print and alternative media. Raw

Story's Lorisa Alexandrovna has been releasing installments of an

interview with Ritter ranging across a wide variety of topics.

Interviewing Ritter, a former intelligence officer, is a daunting task.

could interview me for a year, and I would come up with something new

and dramatic every time you talked to me." But two salient themes

emerge from this latest interview sequence which might, paradoxically,

play right into the hands of the neoconservative war mongers.

The first issue, from a peacemaking perspective, is his
dualistic assertion that the neocons are "really evil"
and "criminally disposed". That sounds a lot like George Bush's Them-Us
worldview, and conflict resolution strategies require putting a finer

point on the matter. No one can seriously question that the

neoconservatives have indeed demonstrated a disposition to perpetrate

and white-wash war crimes. But they are perpetrated within a framework

security for the U.S., Israel and the Arab oil states. One can become

simplistic posture of demonizing the opponent.
I once heard an aikijujitsu instructor put it this way. Rather than

view your opponent as The Enemy, view him as a fellow human being who

does not yet understand the nature of the friendship. If the peace

the roots of the neocon strategy for securing the realm, we are better

served with the aikijujitsu attitude of respect for our opposition.

Flowing from Ritter's Manichean dualism is a tendency for his
knee to jerk diametrically opposite to that of the right wing.
Wherein lies the second, more immediate flaw in his analysis, a flaw
with serious consequences for Democratic party strategy.

Ritter expresses profound scepticism toward the warning from
FBI Director Robert Mueller that "he is a 100 percent certain that
the US will be attacked by chemical and biological weapons." Ritter
knows as well as anyone that CW/BW attacks not only can occur, they
have occured. They have even been perpetrated by organizations with
much more limited resources than Al Queda. The 1995 Shin Rikyo
attacks, for one, used not only Sarin gas but botulinum toxin. They

mechanism consisted of plastic bags and newspapers. Yet Ritter

dismisses Mueller's warning as "a political statement to try to
induce fear."

Ritter correctly states that "there is no terrorist attack out
there that will fundamentally harm the infrastructure of this
country...The twin towers falling did not stop farmers in mid-west
America from harvesting their crops."

The problem with that statement is that it is exactly a red
herring. The concern is not that the physical operation of the US
economy will be frozen coast to coast - although it is not proven
that would not occur with an attack on the power grids and
communications lines. The first concern is that serious harm may
occur within our borders; a second concern is that any such attack
may cause economic, social and political fallout which may be every
bit as disastrous as any operational interuption of infrastructure.
History is replete with chilling examples - stock market crashes,
civil disturbances, etcetera.

How does this relate to Democratic Party strategy? As Scott
Ritter observes, the neoconservatives have very successfully
harnessed fear for their political gains. If, following Ritter's
sanguine assessments, we on the left deny the risks facing us in the
coming years, then if, God forbid, an attack occur, our credibility
will go down the drain and the Republican pundits will remind the
country that we were the ones who scoffed at the warnings.


Getting back to Mueller, we are not in an election cycle. There
is no sufficient motive for the neocons to use the kind of fear
mongering Ritter accuses Mueller of. Mueller is not a part of the
PNAC inner circle and probably has enough professional integrity not
to prostitute himself to the political ambitions of the foreign
policy clique which he has little to do with.

Ritter himself agrees that the FBI is less politicized and
corrupted than the CIA. Ritter states that he believes this is because

and the White House. While that may be a factor, there are others. For

instance, the FBI's need to account to American courts and therefore
maintain a culture of handling civil and human rights issues more
carefully. Clearly there are differences: there have even been reports

such as the torture of suspects. As bad as things are, we are not in

the era of J.Edgar Hoover, and we cannot discount information solely

because it is coming from the FBI Director.

Why would Ritter, who has been right so often, be wrong now? As for his

dualistic perspective of the neoconservatives, an assessment which is

not so much factually wrong as unhelpful to making any progress, the

problem is that his background and training is not in conflict

resolution. He was an inspector, a sort of Inspector Clouseau,

technically a concealment specialist for UN SCOM. He was a Marine. He

guide the peacemaking process. That accounts for his blunt assessment

As for his rosy assessment of our lack of risk exposure from
BW/CW, that probably derives from the nature of his background as a
U.S. Marine and his job with the UN where the weapons he was
sleuthing out were the type that would be used as part of a military
campaign rather than a terrorist attack. Ritter is used to looking for

field, if for no other reason than his brutal honesty.

But Scott Ritter is not oriented to the detection of the kinds
of weapons used by terrorists who move on the soil of the target
country, the kind of terrorist methodology implemented by religious
cults, or fanatics like Timothy McVeigh. To deny that there is a
signifigant risk of such an attack is so absurd that it
would carry little weight were it not proceeding from such a
knowledgable source. Ritter is not seeing the forest for the trees,
blinded by the fog of the infowar he is waging.

cutbacks. Much as we appreciate Ritter's vigorous, take-no-prisoners

approach to waging peace, we need to temper his statements with an eye

on the political consequences and the higher values which are essential

win peace in our time.

Eric David Stein interned in journalism with a small periodical that focused on the Disarmament Commission and other UN NGO's.He traveled through Central America during the 1980's, where he witnessed the effects of war firsthand.