Secret sale of public land. Demonstration against redevelopment of Queens

Newham council intends to sell Queens Market (Upton Park) to private developers St Modwens. The "Friends of Queens Market" group is campaigning against the demolition of this thriving, multi-ethnic market and plans to demonstrate outside Newham Town Hall on Monday 11th April. 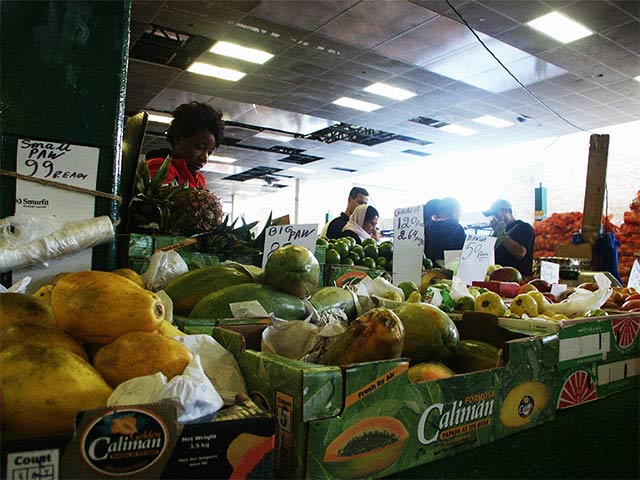 
What drove a hundred and sixty East Londoners to demonstrate outside their Town Hall on a cold and sleety February night? What is due to bring them out in even greater numbers next month?

They came to show their opposition to plans to sell Queens Market, Newham to private developers. After spending nearly a million pounds on regeneration in 1998, the site was put up for sale without public consultation in 2003. Traders, local people and supportive councillors fear the loss of their livelihoods.

Queens Market is a hundred year old bustling market in East London, next to Upton Park on the District Line, consisting of some sixty small shops and eighty stalls, established by act of Parliament a century ago, serving the local low-income and multi-ethnic communities with a very wide range of low price goods. The Friends of Queens Market consisting of local people and market traders want to keep it in existence and keep it in the ownership of London Borough of Newham.

Despite the million pound regeneration, Newham Council has insisted that the market is dark, dirty and dangerous and must be redeveloped. Friends of Queens Market point out that safety is due to the lighting, which the council failed to adequately update during the regeneration. The market has become dirty as a result of Council policy, due to the outsourcing of cleaning to Bywaters and the general slashing of cleaning services.

The Friends believe that Newham Council is committed to attracting higher-income residents to the borough at the expense of existing local residents who benefit hugely from the low-cost fresh food and household items that are essential to the health and well-being of the community.

A recent leaflet published by the Council complained, bizarrely, that the Market ‘suffers from a proliferation of certain uses such as meat sales and fruit and vegetables’.
Much fresh fruit and vegetables from the market are HALF or TWO THIRDS cheaper than the equivalent from Asda. (See Appendix).

Newham Council has consistently refused to release any documents relating to the proposed sale of the site or the original feasibility study conducted in 2000. Even back bench councillors have been refused access to the study.
Local people first learned of the proposed sale by accident when an advert appeared in the Estates Gazette (Feb 2003)- there was no public consultation. By mid 2004, despite a 2,000 strong petition and numerous protests and much public disquiet, the local paper broke the news that the supermarket chain Asda was negotiating with the council to build on the market site. The news came from an Asda spokesman. Before a scheduled public meeting could take place the Mayor formerly appointed St Modwens as the ‘preferred development partner’ for the market on 10 September 2004. He rushed this through as an emergency decision, using General Exception Notice procedure. The reasons given for the rush were ‘public interest’ and ‘market sensitivities’.
At the end of 2004, the council conducted what is believed to be deeply flawed MORI poll. The Mayor claimed a 51% majority in favour of ‘redevelopment’.

Critics of the poll say that interviewees were neither told of the plan to sell the market nor asked if they approved; they were not told that the market area was to be slashed and pushed halfway under a tower block, on the edge of the present site. Whilst 500 ‘nearby residents’ were interviewed, only 214 market shoppers were polled. The Friends of Queens Market already have 7000 signatures petitioning against the market sale!


The Friends of Queens Market argue that St Modwens will kill the market by
1. Slashing the space for stalls and cheap shops by around 50%
2. Boarding up the market for long periods disrupting trade while the lucrative apartments and foodstore are built.
3. Increasing service charges, increasing rent driving the low - price stallholders out of business.
For all these reasons the Friends of Queens Market say the market must stay where it is - and in council ownership and management. All the alleged problems of the market can be resolved by an improved management structure prepared to listen and take on board the many thought-out suggestions which have already been made, by traders and public, for low-cost improvements to the market.
Stall-holder Danny Woodards is clear of one thing ‘My son is working on this stall; my father worked on this stall; my grandmother worked on this stall; I’m not moving’.
The Friends say ‘There is another Asda store in Newham; there are various other superstores ; there is only one Queens Market. ‘Defend our multi-cultural and historical market.’

Another load of thieving developers? I believe they managed to fuck up Angel Endomton, they've been conuslting with Islington council to fuck up Archway even more, and it's also worth checking Elephant & Castle for more of the same.

Seems there's a few of these companies that must have 'friends' on the council. A bit like Derwent Valley and the incredible value Islington council sell-off?

What do you think? Property developers..Politicians...New laws...The big sell off....?

St Modwens, through a front company called KPI and with the collusion of corrupt councillors and their officials, has trashed Farnborough town centre.

Half of the town centre is to be demolished for a superstore, a small estate of social housing is to be destroyed for a car park for the superstore.

There has been no consultation. Many good business have already been driven out of business. Long established local small and family business. No one in the town wants this development, no one that is other than local councillors and their officials who give a very strong impression of being in the pocket of the developer.

KPI have now applied the the Secretary of State for road closures, which will finish off the few remaining retailers.

http://www.farnborough.co.uk/story.asp?intid=832&txtpaper=
Details of these road closures may be obtained from GOSE

Please ask for information, maps, and a copy of the application made by KPI.

We have less than three weeks in which to object - 28 days from 18 March 2005 when a formal notice was posted in the street.

We need to generate a large number of objections to force a public inquiry. KPI withdrew their previous application for road closures as they were facing the real possibility of a public inquiry.