Proces started agaisnt for anarchists in Aachen on March 23. 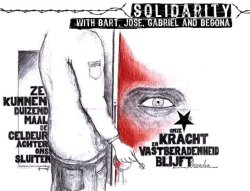 On June, 28 2004, four people were arrested in Aachen, Germany, after a shooting with the police and hostage-taking, while attempting to escape a police control. These four persons are Bart De Geeter, José Fernandez Delgado, Gabriel Pombo da Silva and Begoña Pombo da Silva.

Bart De Geeter is a Belgian anarchist, 26 years old, active within the movement for several years, particularly within the solidarity work with prisoners (as a member of the Anarchist Black Cross - Gent, Belgium) and people without papers.
Gabriel Pombo da Silva is a well-known Spanish anarchist, 36 years old, who spent 20 years in prison of which 14 in the infamous FIES isolation regime. In October last year he escaped from prison and ran away from Spain. Gabriel is one of the social rebels/anarchists who struggled for years against the brutal conditions, the isolation, torture and mistreatment within the Spanish prisons.
The 44 year old José Fernandez Delgado is another Spanish anarchist who escaped from prison recently after spending 24 years in prison.
Begoña is 34 years old and is Gabriel’s sister. She lives in Germany and has a 7 year old daughter. Except for being the sister of Gabriel, she has no relation to the anarchist movement.

The four were stopped by the German police just beyond the German border, at a petrol station on the way to Aachen. The reason for the police intervention seems to have been a drug control. When the police wanted to search the car, one of the 4 pulled a gun and shot in the air. In the next moments, the three men took a couple as hostages and fled with a car; the woman though was jumped upon and arrested by the police. The three men were chased by the police, a shooting took place way and back, and when their car broke down they let the hostages go and fled with another car. Finally the three hid in a garage, where they were surrounded by the police, and after some time the three gave in.

The three men have been charged by the public prosecutor of Aachen with attempt of murder (9 times), hostage taking (twice), armed robbery, planning of a robbery and serious traffic violations. Given the course of the events, it is likely that Begoña is held with less serious charges.
At this moment, an international investigation is going on against the international radical left movement, that is: Spanish, Belgian and German anarchists are under investigation and are considered as an “international network”. As far as we know, no investigation has been opened on the basis of article 129a/B of the German Criminal Code (terrorism).
There is also no extradition demand from Spain or Belgium, since the events took place in Germany. Whether more charges will follow, eventually by other EU countries, remains to be seen.
The fact that an international investigation of the international radical left movement is going on became very clear when on August 4, 2004, in Dresden, Germany, the police raided the house of two female comrades. Both are long time activists within the prisoners’ solidarity movement and the organisation Rote Hilfe (Red Help) in Germany. They were asked by the Anarchist Black Cross - Gent, Belgium, to provide lawyers for the detained, and since then they follow up the case together with the ABC-Gent. The two women are now suspected to have planned a robbery together with the four arrested!! According to the police, in the car of the arrested a city map of Dresden was found on which weapon shops and police stations are marked. Also an eventual escape route to the Czech Republic was on this map. This city map, together with the fact that both activists provided a lawyer for Bart and asked for a visit permit, seemed to have been sufficient reason for the police to raid the house of the two women. During the house search, by the Landeskriminalamt Sachsen and the Aachen police, mobiles, computers, writings, letters of prisoners, etc. were confiscated. The two women were not arrested. One of the women made a complaint about the house search, but it was refused as ungrounded by the regional court of Aachen. She appealed this decision.

In the media, the case was initially covered as a spectacular event, good to fill the front pages and to fulfill the need for sensation, and to spread a bit more the fear for all those “dangerous criminals”. When it became known that there is a political background, the first stories about possible connections with ETA, etc. showed up - as usual when it is about Spain/Spaniards. From journalists who don’t know more than what governments, police and justice tell them, you can’t expect more…

We though know that it’s our comrades that have been captured and that they wage a struggle, as we do, against repression and prison, against poverty and exploitation, against exclusion and alienation. We have no doubt that they will continue the struggle inside prison, and we will be on their side outside. We are all prisoners because we neither want nor accept nor are resigned to this miserable world full of injustices, lies and suffering.

We call for international solidarity with our comrades, captured because they struggle to break down all walls and frontiers and for freedom for all.