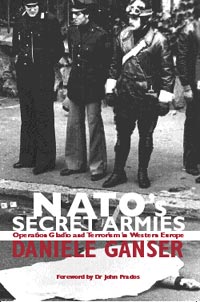 These aea so-called'false flag' killings - where the perpetrators blame the enemy. cf. Iraqi 'suicide bombers,some of which are likely to be simply US special forces covert ops.

"On the morning of August 2, 1980, a massive bomb exploded in the waiting room of the central train station in Bologna, killing 81 people and injuring 200 others. General Santorito, the chief of Italy's military intelligence agency, SISMI testified in the wake of the bombing that it had been planned by the British-Swiss-American 'Montecarlo Comite' based in Monaco."

A recent book reveals, for the first time, that self-harming attacks like 9/11 are nothing new. We are living in an age of Western military lawlessness and psycopathic madness. The author is Daniele Ganser and the book is entitled NATO's Secret Armies. NATO's 'Stay Behind' Gladio forces, formed in the 1950's, have been responsible for many, if not most of the so-called left wing bomb attacks of the last 40 years. The current state of knowledge is documented in this incredible book which costs - unfortunately - almost £100.00. Nevertheless now is certainly the time to be exposing the simple cross-national use of special forces to plant bombs and carry out assassinations blaming them on the red brigade and other left wing militant groups.

This book pieces together the evidence that, in just about every country in Europe, NATO 'special forces' and extreme right-wing paramilitaries have been planting bombs killing thousands of innocent civilians. Bombs which were subsequently blamed on Red Brigaes, Baader Meinhof and other left-wing activists. This is psychopathic 'self-harming' terrorism for political ends aligned with the extreme right. Italy has been a particular target in NATO's brutal campaign.

In each case where NATO/Gladio involvement has been proven, 'official secrecy' has been used to cover up the truth and the culprits have been whisked off and protected by the military. Police and other officials attempting to investigate, and journalists, have been killed, suicided, and disappeared.

This book is a real bombshell and a milestone, it represents a catalogue of institutionalised (NATO) domestic and European state terrorism running back to the 1950's. It's available on next day delivery from Amazon.co.uk for £20.00.

The CIA and the British secret service MI6, in collaboration with the military alliance NATO and European military secret services set up a network of clandestine anticommunist armies in Western Europe after World War II. The secret soldiers were trained on remote islands in the Mediterranean and in unorthodox warfare centers in England and in the United States by the Green Berets and SAS Special Forces.

The network was armed with explosives, machine guns and high-tech communication equipment hidden in underground bunkers and secret arms caches in forests and mountain meadows. In some countries the secret army linked up with right-wing terrorist who in a secret war engaged in political manipulation, harrassement of left wing parties, massacres, coup 'Etats and torture.

Codenamed "Gladio" ('the sword'), the Italian secret army was exposed in 1990 by Italian Prime Minister Giulio Andreotti to the Italian Senate, whereupon the press spoke of "The best kept, and most damaging, political-military secret since World War II" (Observer, 18. November 1990) and observed that "The story seems straight from the pages of a political thriller." (The Times, November 19, 1990).

They were internationally coordinated by the Pentagon and NATO and had their last known meeting in the NATO-linked Allied Clandestine Committee (ACC) in Brussels in October 1990.

The worldwide fight against drugs and terrorism which, rather strangely, involves recruiting and training terrorists, letting off Bombs, committing war crimes and dealing narcotics...

All about the New book

not only but also.... The Old Men at the Zoo

Angus Wilson's classic sixties novel has almosty disappeared from history. He shows just how easily we can and do get things wrong in a climate of fear, with war on the horizon. And how easily we are manipulated. The book is set in and around the London Zoo in Regent's Park in a Britain facing an impending invasion by France and Germany. There's not a hint of zenophobia taints the novel, in case that was what you were thinking.

Jonathan Powell at the The BBC produced it in the 1980's but you can bet Auntie won't be repeating this in the run-up to the referendum on the Euro. Especially since, as we've just heard, Eighteen million pounds of our public money is going towards a desperate campaign to promote the Euro. The pound is begining to look like a beleagured credit union on a run-down housing estate as the Euro-dollar barons move in. They have already banked our cheque and we are not allowed to say no. from www.bilderberg.org/pepis05.htm

PDF of the book

This PDF is also available via Bittorrent, see also the BBC2 Timewatch series from 1992:

The first of three programmes about `Gladio', the secret terrorist network operating in Europe. Discusses the network's creation, after the end of the Second World War, from a group of Nazis remaining in occupied territories, and in resistance to the rise of communism. Reveals the role of the CIA in the political affairs of post-war Europe through their manipulation of `Gladio' and the network's influence in the internal affairs of almost every European country.

Second of three programmes exploring the influence of `Gladio', a state-sponsored terrorist network organisation operating in Europe. This programme examines the Bologna railway bombing in 1980 ostensibly by the Red Brigade. The programme argues that the Brigade had been inflitrated by right-wing agents who conducted a series of atrocities that so terrified citizens that they called for greater state security.

Third of three programmes exploring the influence of `Gladio' a terrorist network organisation operating in Europe. This programme examines the kidnapping and subsequent of murder of Aldo Moro.

And the Wikipedia for more information: