This is part one of a report of the Cairo Conference held in Cairo, Egypt from Thursday 24th March to Sunday 27th March 2005. 8 photos are attached. Part two will follow. 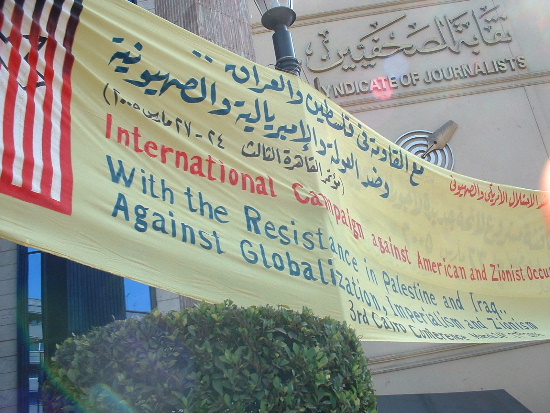 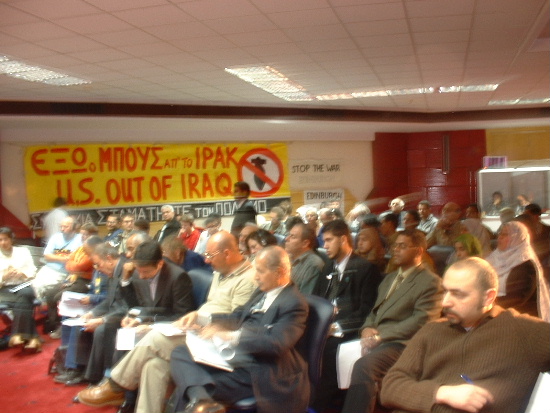 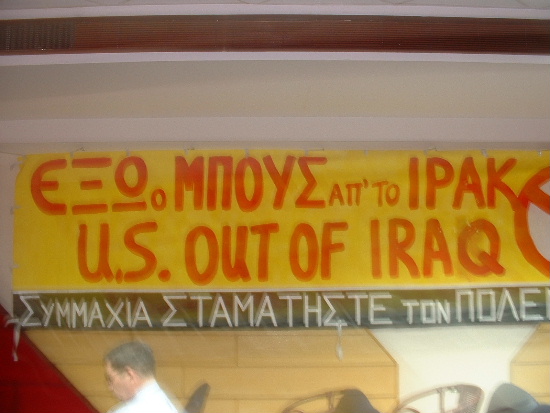 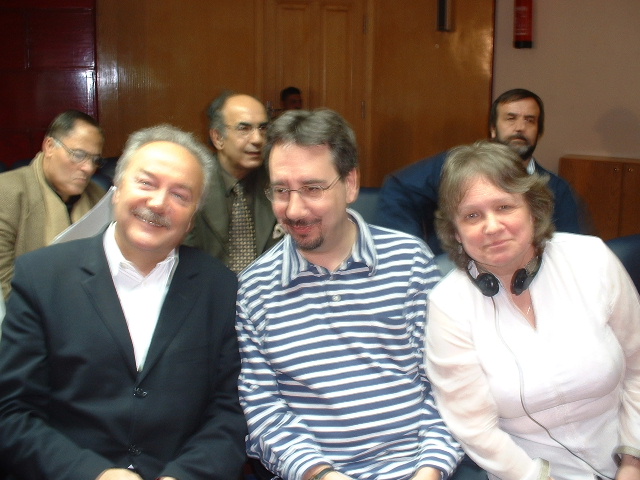 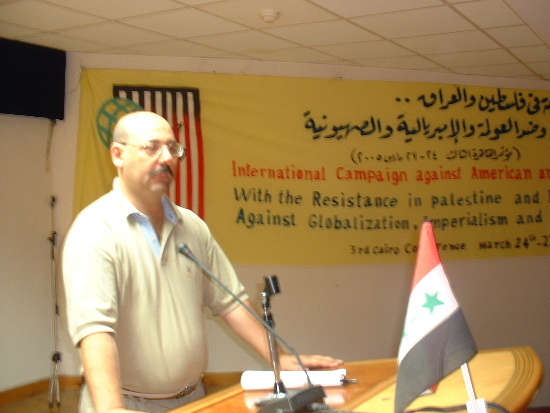 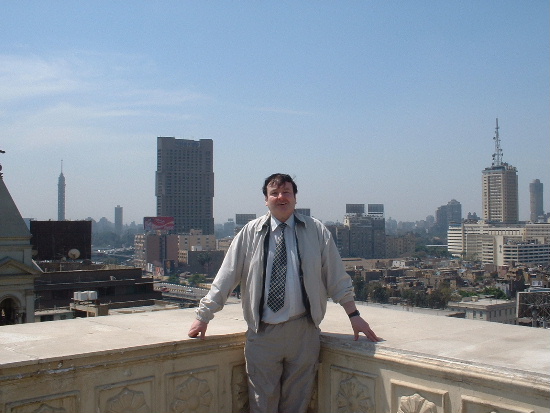 Paul on top of the conference building. 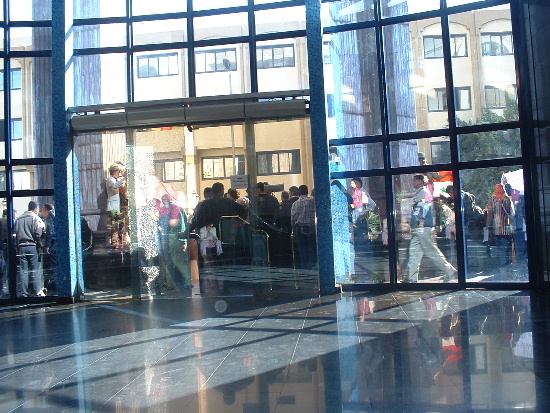 View of the protest from inside the building. Many police outside! 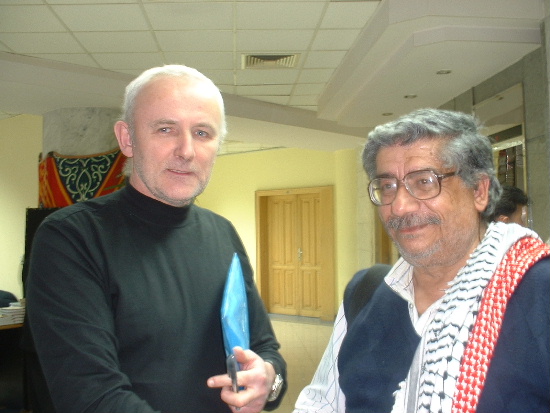 Mick Napier with Palestinian friend at the Cairo Conference.


The third International Cairo Conference took place from Thursday 24th to Sunday 27th March at the journalists syndicate building in the city centre. Up to 1,000 took part in a series of plenaries, workshops and forums. There were also a number of films shown in the small 50-seater cinema in the building.

Thursday evening saw the conference start with a plenary including speeches by many delegates and representatives of local and international groups and activists. The police presence outside the building was disproportionately high with dozens of black bereted Egyptian officers and many large green police vans – much large than anything seen in Britain.

Friday’s program included workshops on supporting the resistance in both Iraq and Palestine. There was also a plenary on the US imperialist project and the challenges posed by Globalisation.

Saturday 26th started with a plenary in the Marhe Hall on the Zionist project and the nature of the State of Israel. The first speaker was John Rose author of `The Myths of Zionism` who said the Jews were not natural allies of Zionism. He said that many Jews were active in the Russian revolution. Balfour who was a member of the war cabinet at the time of the First World War made Britain’s notorious Balfour declaration. Balfour held that Zionism could help the British Empire. Ironically Balfour was no friend of the Jews, he did not want Jews in Britain but wanted them in a new state. The first main sponsor of Israel was France because Egypt was supporting the resistance in Algeria and France gave Israel its nuclear technology. Since the 1967 war the US has been Israel’s main beneficiary. Israel was seen as a warship by the United States, which has given more than $100 billion to Israel. No other client state of America has received this amount of money. Some in Europe had seen President Clinton as a friend of the Palestinians but this is untrue. The number of Israeli settlers doubled after the Oslo deal and the theft of water continued with the Israelis getting five sixths of the water in the West Bank. He finished by saying to loud applause that Zionism had to be either dismantled or overthrown.

A number of Egyptian speakers spoke in Arabic and battery operated translators were available for interpretation. They spoke of the suffering of the Palestinian people and their struggle for existence.

A British speaker from the Palestine solidarity movement spoke next. He said that the US and Britain wanted Mahmoud Abbas to accept a few bantusans which will laughingly be called a `State`. The so called withdrawal from Gaza will end up with the Gaza strip being surrounded by a ring of military bases making it even more of a prison camp than it is now. He said that the Apartheid wall was an excuse for Israel to annexe 58% of the West Bank. He declared that the sympathy for the Palestinians was greater than at any time before. He made the point that Jews and Arabs had lived in harmony for centuries. He finished by saying that the road to Jerusalem runs from Cairo.

There were a number of questions from the audience with John Rose answering to a question about Israel’s influence on the United States making the point that Israel by itself is nothing – it is the US, which is the big power.
Another speaker made the point that any criticism of the actions of Israel is deemed as `anti-Semitic` which is a very powerful smear. It is a myth that most Jews support the policies of Israel against the Palestinians.

A female Egyptian speaker spoke out against the acceptance of the repression of the Palestinians by Arab governments.


A number of films were shown on Saturday in the cinema including `Siege of Fallujah` and `Border Writers` and `Mass movements in Egypt`. Danny Schechter’s new film `WMD weapons of mass deception` was shown on Saturday evening with many Egyptian journalists and activists expressing an interest and asking for Danny’s contact details. Over 100 fliers for the film were given out to the delegates present and the film had a good turnout.