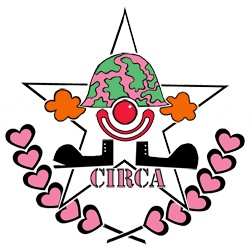 Excited and greatly stimulated by the buds of spring, The Clandestine Insurgent Rebel Clown Army (CIRCA), are proud to announce the start of regular Basic Rebel Clown Training (BRCT) sessions in London, every Monday evening for 6 weeks, beginning on Monday 4th of April. We invite all potential recruits to join us at Ramparts Creative Social Centre, Ramparts (17 Rampart street - E1 2LA – nearest tube Aldgate East/Whitechapel) every Monday, 7-9pm for a wonderful evening of Basic rebel Clown Training (BRCT).

The BRCT aims to prepare recruits for the founding of a spanking new London Regiment, enlarge our shiny boots, tickle our tremendous tricks, and prepare for operation “H.A.H.A.H.A.A” (Helping Authorities House Arrest Half-witted Authoritarian Androids) whose final baffle will take place this July, as we surround the G8 in Scotland and thank the police for building fences to keep these dangerous men inside and make sure they don’t escape into the fearful world that they have created.

The BRCT will be open to all and sundry across the city and beyond, who have an open heart, laughing lips, inquisitive noses and have rejected cynicism of capitalism. See www.clownarmy.org for more details.

P.SSSSS.
If no one told you who we are and what we do. The Clandestine Insurgent Rebel Clown Army (CIRCA) are developing new methods of political activism that bring together the ancient practice of clowning and the more recent practice of non-violent direct action (NVDA). Following Basic Rebel Clowning Training (BRCT), during which recruits begin the process of finding/uncovering their “clown” and learning NVDA skills, clownbattants take part in various forms of action against war and capitalism. Some recent actions have included occupying and closing down army recruitment centers, mistakenly disrupting a Johnny Depp premiere and welcoming George Bush to Buckingham Palace with a cardboard cannon firing pink pretzels. We see innovative forms of action as key for building dynamic social movements, but realise that the psyche is as important a site for struggle as the street. CIRCA believes that a self destructive tendency within many social movements is forgetting the inner work of personal liberation and transformation. this is an area our rebel clown trainings works on deeply, while also providing creative tools to confuse and befuddle authority.