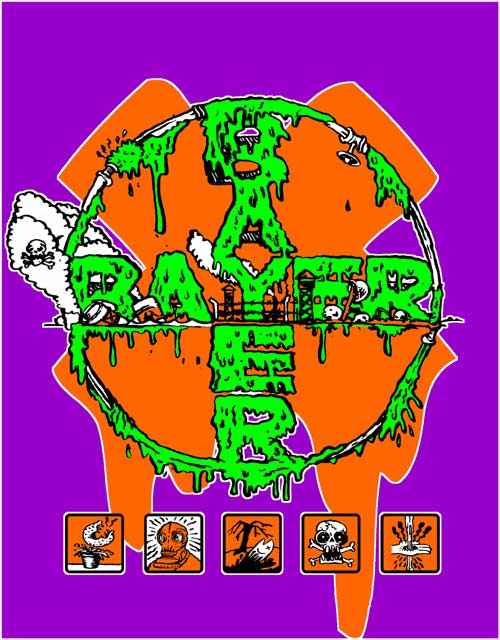 The Coalition Against BAYER-Dangers submitted countermotions to Bayer´s Stockholders´ Meeting on April 29. The proposals were published on Bayer´s website (see pdf file).


Countermotion to item 2: The actions of the members of the Board of Management are not ratified


Reasoning: The BAYER Group caused many grievances in the last fiscal year. The Board of Management holds responsibility for this, which is why the request to ratify the Board's actions must be refused.

• BAYER is regularly involved in price fixing with its competitors, and last year alone was caught four times. In summer, the BAYER Group had to pay a fine of 66 million dollars when it pleaded guilty before the US authorities to fixing prices for plastics additives with other manufacturers. In the fall, BAYER was given another high fine, this time of 33 million dollars, for creating a cartel with several polyester producers. Shortly afterwards, the Group was forced to admit illegal agreements concerning the selling of rubber chemicals and had to pay a fine of 4.7 million dollars. In Portugal, BAYER was found guilty of price fixing in the sale of diabetes tests. Illegal cartels have been a perfectly normal feature at BAYER for many years. The practice is evidently covered up by the Board of Management.


• The study entitled "Child Labor and Transnational Seed Companies", published in 2003 by the Coalition Against BAYER Dangers, revealed how international seed companies were profiting from child labor. The study showed that suppliers of the Indian BAYER subsidiary, ProAgro, employed more than 2,000 children between the age of 6 and 14. After publication of the study, spokespersons from BAYER acknowledged their responsibility and promised to remedy the situation. Recent studies show, however, that the situation at ProAgro has barely improved. Last year, around 1,650 children were still working for suppliers of the company. This is irreconcilable with the standards of the ILO,OECD and UNO.


• Since the 1920s, BAYER has been financing politicians - at that time known as the "Duisberg System". Many employees of the BAYER Group became parliamentary delegates and even ministers. The Coalition Against BAYER Dangers took the current discussions as an opportunity to send an open letter to the company in which we asked not only which parliamentary delegates received a salary or other benefits from the BAYER Group but also to which public institutions (authorities, research institutes, universities) members of the company were delegated. So far, the company has failed to reply.


Generally speaking, BAYER only answers questions that are agreeable to it - a clear contradiction of the "Chemie im Dialog" (Dialogue with the Chemical Industry) campaign.


• In the vicinity of a factory in Durban/South Africa, which is now operated by LANXESS AG, highly toxic chrome compounds were found in the groundwater. The residents were urgently recommended not to use the water from neighboring wells, either for boiling or for drinking. LANXESS does not dispute its responsibility but claims not to have manufactured any chromium since 1991, saying the contamination had come from old contaminated sites. BAYER acquired the Chrome Chemicals company in Durban in 1968. Due to inadequate safety facilities, one third of the workforce suffered permanent health damage. At least eight workers died of lung cancer and two others of tuberculosis. Even the Apartheid government complained in a report in 1976 of poor safety standards and health problems among the workforce. Following protests by South-African trade unions and the Coalition Against BAYER Dangers, which led to many media reports, BAYER closed down its chromium production in 1991 and dismissed a large proportion of the workforce. No compensation was paid to the affected workers or their surviving dependents. The toxicity of the groundwater also shows that BAYER has failed to carry out decontamination measures on the land in the last 14 years.


• A US court sentenced BAYER last year to pay compensation of 400,000 dollars to 33-year old Miguel Valverde, who suffered a stroke six years ago after taking the cold remedy, Alka-Seltzer Plus, for three days. The jury found that BAYER had marketed a "defective and dangerous product", even though safer alternatives were available. Up until the year 2000, Alka-Seltzer Plus contained phenylpropanolamine (PPA), which increases the risk of a stroke by one and a half to three times. BAYER has known the risks involved with PPA for several decades. However, the pharmaceutical industry withheld its own studies so as not to endanger the sales of PPA-containing drugs worth several hundred million dollars a year. Even worse, under BAYER's leadership, the manufacturers submitted counter-reports and threatened court action to delay a ban by the US health authorities. Hundreds of people had to pay with their lives for this strategy. The Coalition Against BAYER Dangers additionally calls for criminal prosecution of the people responsible at BAYER and other companies.


• Around 40 million Americans practice the so-called "Atkins diet", which allows the consumption of meat, eggs and fatty foods without restriction but severely limits the consumption of bread, rice, fruit and vegetables. Nutritional scientists have issued urgent warnings about deficiency symptoms, indigestion problems and circulatory diseases. Nevertheless, the pharmaceutical industry is still endeavoring to profit from this "designer diet". The BAYER Group launched the vitamin cocktail CarbSmart onto the market specifically to supplement the Atkins diet, and has already posted sales of several million dollars. Those responsible at BAYER should know that the Atkins diet is harmful to health and that vitamin products can never replace a balanced diet. This is yet another case of the pharmaceutical industry being completely unconcerned about the health of the population as long as the sales figures are okay.

Countermotion to item 3: The actions of the members of the Supervisory Board are not ratified


Reasoning: The Supervisory Board does not adequately fulfill its function of overseeing and controlling the work of the Board of Management, and its actions should therefore not be ratified. Below are some examples of an environmentally unfriendly corporate policy that is tolerated by the Supervisory Board:

• Dangerous accidents occur nearly every day at BAYER's plants - due in part to the progressive thinning out of the workforce. Here is a small sample of incidents that occurred in the second half of 2004: In the Addyston (USA) plant, which has been operated by LANXESS since 2005, toxic chemicals leaked out a total of nine times. On November 23, 2004, there was an explosion at BAYER's Brunsbüttel plant, and five employees had to be treated in hospital. On September 29, 2004, activated carbon leaked from BAYER's Uerdingen plant and eight employees were taken to hospital. Also in Uerdingen, 400 kilos of toxic adipic acid leaked out on December 11. On November 3, following a power cut in Dormagen, chlorine and nitrous gases were released; a 15-year old boy inhaled toxic chlorine and was taken to hospital. Since the chlorine gas cloud was blown towards the railroad tracks, the fire department had to halt the neighboring rail traffic. On August 26, 2004, there was an incident at the plant operated by GE BAYER Silicones: During repair work on a tank car, it sprung a leak and toxic hydrochloric acid vapor was released.


• The environment authorities in the Canadian Province of Ontario subjected about 30 production plants in the chemical belt of Sarnia to a thorough examination. In recent years, the water supply to the surrounding communities had been interrupted several times because of leakages and accidents. Twenty factories, including four from BAYER, received a warning last year. They were reprimanded because of a lack of operating licenses, inadequate declaration of toxic waste and unauthorized rebuilding of production plants. The environment ministries of Ontario sharply criticized the conduct of the chemical industry.


• In the southern Indian cotton belt, there are still a large number of cases of fatal poisoning from BAYER pesticides. BAYER dominates the Indian pesticides market and has large quantities of agrochemical poisons like monocrothopos (which is no longer approved in Europe) manufactured by subcontractors. Because of a lack of safety standards, accidents are common and the groundwater of entire regions is contaminated.


• In several BAYER factories, the company fire service is to be disbanded for cost reasons, e.g. in Wuppertal and Wolfenbüttel. This means that in an emergency, it takes longer for help to arrive from outside. The safety of the workforce is put at risk for profit reasons.


• The environment association, Friends of the Earth, has collected several studies in the last few years on the risks of pesticides. Many of them involved investigations from BAYER on the agrochemical poison, glufosinate. When BAYER got wind of this, it wanted to ban publication of the legally obtained studies through the courts. The company tried to stop Friends of the Earth even naming the title of the studies or giving the address where the studies could be obtained. This is not the first time the company has attacked the work of environmentalists through a court of law. BAYER was, however, unsuccessful in obtaining legal backing for its demands.


• Last year, previously unknown company documents emerged showing that BAYER consciously exposed thousands of Asian hemophiliacs to the risk of HIV with its anticoagulant, KOATE. In the eighties, the BAYER subsidiary Cutter supplied batches of the blood plasma product to Asia that had not been heat-treated and therefore concealed a high AIDS risk. In the United States, such sales had already been banned by this time. Nevertheless, the company refuses to properly compensate the people affected. The Coalition Against BAYER Dangers calls for criminal prosecution of the BAYER managers responsible.

Countermotion to item 4: We propose the election of Axel Koehler Schnura, Diplom-Kaufmann, Düsseldorf, to the Supervisory Board as a shareholder representative.


Reasoning: Axel Koehler-Schnura has been monitoring the BAYER Group for more than 25 years. He is the founder of the Coalition Against BAYER Dangers and has brought many of the company's infringements against human rights and environmental protection regulations to the attention of the general public. This makes him the ideal candidate for overseeing the work of the Board of Management of BAYER AG, entirely uninfluenced by profit interests.

Countermotion to item 6: § 14 and § 15 of the Articles of Incorporation remain unchanged


Reasoning: The planned change to the Articles of Incorporation would make attending the Annual Stockholders' Meeting more difficult. This would further hinder the task of overseeing and controlling the work of the Board of Management and Supervisory Board.

On behalf of the Management of the Coalition Against BAYER Dangers,

Please note that bank transfers within Europe are usually no more costly than within your own country, if you quote the BIC and IBAN