Amnesty International Statement on the Genoa G8 Diaz police trials due to start this week on Wednesday 6th. Also comments on the ongoing Balzanetto detention centre torture trials and Italy's failures in general.

The opening of the diaz trial on wednesday is just the start. The actual trial is not expected to go ahead until the end of the summer - again raising fears that if more delays occur then under the Italian legal system too much time will have elapsed and the trials cannot proceed. 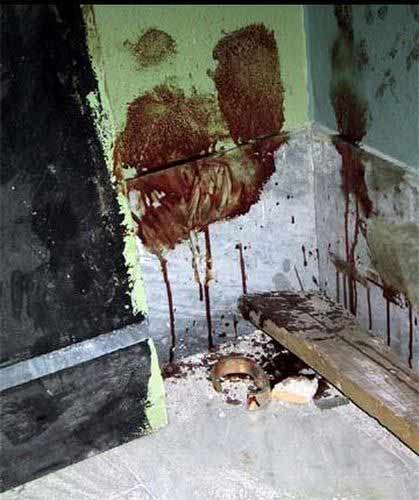 On 6 April, almost four years after the policing operation surrounding the G8 summit and related demonstrations held in Genoa in July 2001, 28 police officers, a number of them high-ranking, are scheduled to stand trial. They are being tried in connection with an overnight police raid on a school building used as a dormitory for demonstrators and as centre for the Genoa Social Forum, the umbrella group organizing the main programme of demonstrations. The accusations against them range from abusing their powers as state officers, falsifying and planting evidence and causing serious bodily harm.

Amnesty International welcomes the opening of the trial as a significant step towards combating police impunity. However, it laments the failure of the Italian authorities to take other vital measures to combat police impunity, both in connection with the G8 policing operation and in the broader context of frequent effective impunity for law enforcement and prison officers accused of torture, ill-treatment and excessive force, which Amnesty International has recorded over many years.

The 93 people arrested during the raid on the school building said they had offered no resistance, as the police maintained, but were subjected to deliberate and gratuitous beatings. At least 62 of them suffered injuries: 31 were taken to hospital, three of them in a critical state. Some are still receiving medical treatment. They were not only accused of resisting the police but of theft, carrying offensive weapons and belonging to a criminal association intent on looting and destroying property. By February 2004, following criminal investigation, all proceedings against them had been dropped for lack of evidence. Only 28 police officers are standing trial: scores of officers involved in the raid, and believed to have participated in physical assaults, could not be identified because their face were frequently hidden by masks, scarves or riot helmets and they wore no numbers or name tags.

Amnesty International has repeatedly urged that Italy bring its practice in line with the European Code of Police Ethics, adopted by the Council of Europe in September 2001 and ensure that its officers are obliged to display prominently some form of individual identification, such as a service number, in order to avoid situations of impunity recurring.

Another internationally-recognized means of preventing a climate of impunity developing and further police abuse occurring is the suspension from duty of officers suspected of such offences, pending the outcome of criminal proceedings against them. Amnesty International has been concerned to note that the officers facing trial in connection with the overnight raid in Genoa were not suspended from service and that some were, in fact, promoted.

The majority of those arrested in the overnight raid were taken to Bolzaneto temporary detention facility through which well over 200 people passed and where many were deprived of the fundamental and internationally-recognized rights of detainees, including their right of access to lawyers and consular officials and to have relatives informed of their whereabouts. In a submission to a preliminary hearing judge in March 2005, Genoa public prosecutors set out graphically the evidence of verbal and physical abuse suffered by the detainees. They described, among other things, detainees being slapped, kicked, punched and spat on; subjected to threats, including of rape, and to verbal abuse, including of an obscene sexual nature; made to line up and stand for hours, spread-eagled against a wall; deprived of food, water and sleep for lengthy periods; subjected to body searches carried out in a deliberately degrading manner, with detainees made to adopt humiliating postures and women made to strip naked in the presence of male officers. They cited individual instances of abuse, including a female detainee having her head forced into a toilet, a male detainee being forced to go down on all fours and bark like a dog and the beating of male detainee unable to remain standing for hours because he had an artificial leg.

The prosecutors requested that 15 police officers, 11 carabinieri, 16 prison officers and five medical personnel be committed for trial on various charges, including abusing their authority, coercion, threats, and causing bodily harm, and accused them of subjecting detainees to inhuman and degrading treatment in violation of Article 3 of the European Convention on Human Rights and Fundamental Freedoms. However, the prosecutors also expressed the fear that, given the amount of time already passed since July 2001 prescription -- the lapsing of the time frame during which a crime can be tried -- might intervene and those accused in their submission might never be brought to justice.

Amnesty International underlines that one of the most effective ways of preventing torture, ill-treatment and excessive force lies in the application of appropriate sanctions -- commensurate with the gravity of the crime -- by the criminal justice system. Knowing that the courts are ready to inflict rigorous penalties on officials who order, condone or perpetrate torture and ill-treatment constitutes one of the most powerful dissuasive factors. Bringing offenders to justice not only deters them from repeating their crimes, it also makes it clear to others that ill-treatment will not be tolerated and reassures the general public that no one is above the law.

In July 2001, given the lamentable absence of an independent national human rights institution or an independent police complaints and accountability body in Italy, Amnesty International called for the immediate establishment of an independent public commission of inquiry into the G8 policing operation and put forward some of the criteria for an effective commission. No such body has ever been established but the need remains. Such a body could also provide the basis for a permanent, independent police complaints and accountability mechanism, with a mandate to address all aspects of policing.

The importance of political will in combating police impunity cannot be underestimated. Amnesty International echoes the clear guidance which the Council of Europe's Committee for the Prevention of Torture addressed to all member states last year: "... no one must be left in any doubt concerning the commitment of the State authorities to combating impunity. This will underpin the action being taken at all other levels. When necessary, those authorities should not hesitate to deliver, through a formal statement at the highest political level, the clear message that there must be 'zero tolerance' of torture and other forms of ill-treatment."

For further information see in particular Italy: G8 Genoa policing operation of July 2001. A summary of concerns (AI Index: 30/012/2001) and the entries on Italy contained in successive editions of Amnesty International Concerns in Europe and Central Asia and the annual Amnesty International Report. All to be found at