Nearly four years after police trapped thousands of protestors in Oxford Circus for 7 hours without access to toilets, food or water during the Mayday 2001 protests, the High Court has has rejected compensation claims that people's "right to liberty" under the European Convention on Human Rights had been breached.

The compensation claims were brough by Lois Austin and Geoffrey Saxby who were caught by the police action in surrounding thousands of protestors - their lawyer argued that detaining people for a short while might be justified in certain circumstances, but that holding people for over seven hours was illegal imprisonment.

After a two week court case, on Wednesday 23rd March, Mr Justice Tugendhat said the Metropolitan Police were "duty bound" to impose an absolute cordon to prevent violence and the risk of injury to persons and property. He said the case was about the right to liberty and public order "and not about freedom of speech or freedom of assembly", adding that if water and toilets had been provided, "they would have been used as weapons against the police by a minority of the crowd".

There are around 150 other claims by people held by the police operation which were depending on the test case outcome. The two are now set to take the case to appeal.

Civil Liberties organisations fear the judgement will encourage the police to use similar methods in the future, specifically at the G8 Summit in Scotland this July. Shami Chakrabarti, director of Liberty, said: "Today's judgment should alarm anyone who believes in the right to protest or that people should not be detained en masse like cattle." 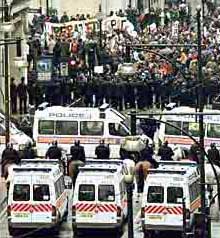