A couple of Edo demos

A day of action against the Edo Injunction. 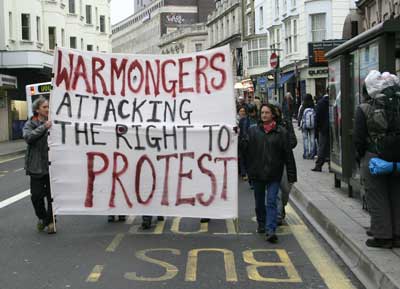 Two demonstrations against our very own manufacturers of death and destruction took place in Brighton today in preparation for the High Court case in London tomorrow. Thanks to David Jones's attempts to shut down peaceful protests he has simply revitalised the campaign against them. Clever boy David!

The first demonstration at 2.00pm at the factory was our largest yet with an estimated 65 people turning up. It was loud and peaceful. Despite the dull weather and duller location (how do the workers find the will to spend 35hrs+ a week there?) we stayed for two hours before moving on to Churchill Square in the centre of Brighton. Here about 50 gathered and another 15 Quakers held a silent vigil outside the Friends' House. We then went on a circular march around Brighton so that nobody in this town can be in any doubt that this US company is not welcome here.

We were on these demos to clearly show that we will not be bowed by this attempt to crush us. The company, clearly cannot tell the difference between peaceful protest and acts of vandalism since they've merge the two to make it look like some evil campaign of intimidation against them. At the same time they use unethical legal 'techniques' and a dodgy 'no burden of proof' law to harass and intimidate the vast majority of decent people who go up to express their displeasure at the fact that some people make their living making things that kill people.

David Jones also made a very weak attempt to defend the indefensible on the Channel 4 lunchtime news today. Looking like the greasiest of insurance salesmen he gave the most pathetic reasoning to defend his actions. Clever boy David! The evening edition seemed to be focused on making non-existent links to animal rights campaigners. With a bit of coaching, editing and makeup David now looked a bit more acceptable but this was probably helped by the fact that TLC himself appeared which kinda helped make David look a bit more acceptable. Clever boy David!

Despite the slurs that have been thrown our way mostly based on bundle 'c' (AKA the 'dodgy dossier') and a TLC hotline to the media we are still going strong and will fight for our legal right to protest. Edo's lawyer Tim Lawson-Cruttenden (known to many as TLC) has taken syllogism to new heights in his continuing attempts to crush free speech and protest in the UK.

This is the kind of TLC logic behind the dodgy dossier, bundle 'c':
A peace protester once got caught for speeding; serial killer Harold Shipman once got caught for speeding; therefore the peace protester is a serial killer!
That's the case we're talking about here. It really is that simple! Unbelievable but very, very, very true.
Don't you just love the New Labour version of English law.

Latest!!!!
There is also a student demo at the site tomorrow (Thursday)in the morning...

And don't forget to come to the High Court.