While dozens of police are on trial for abuses in Genoa in 2001 (including the violent raid on the Indymedia Centre which left British independent journalist Mark Covell critically injured), trials have been taking place in New York in relation to over 1,800 people arrested during the Republican National last year. This week (more than four months after NYC IMC first broke the story of perjury by a NYPD Officer, a front page story in the New York Times [which can be read here] reveals the role played by independent video evidence in the dismissal of the false charges brought by police.

Over 90% of the people arrested have since be found to have commited no crime. Police video 'evidence' presented in court by the prosecution was proved to have been doctored in at least one case. You can read the transcripts of the Democracy Now! interviews about this story that aired last week or check out the whole show as audio or video.

While the availability of cheap video technology has led to an increase in the amount of video being presented as powerful evidence in court. Police in this country are clearly targetting 'unsympathetic journalists' in an attempt to both stifle any publicity given to protests and avoid public scrutiny of their own actions. In a recent example, a freelance journalist was arrested just minutes after filming an arrest that occured during a protest outside a meeting of G8 environment ministers taking place in London. It was reported afterwards that the police kept the footage and the camera but typically, the charges have since been dropped. 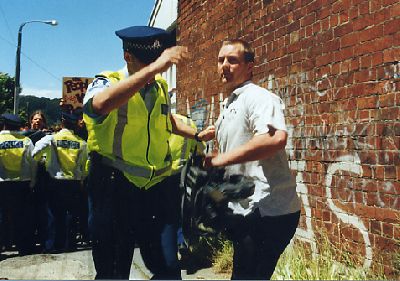 If you are interested in media activism, on the 14-15 May in London, Indymedia UK will be hosting an independent media convergence for independent journalists, media activists, techs, and artists from all over Europe to meet each other and plan non-corporate media coverage of the G8 summit taking place in July.