Up to 15 vanloads of police were on hand today to assist the Greenwash Guerrillas in ensuring the general public were kept well away from BP's Annual General Meeting at the newly renamed Oil Festival Hall. 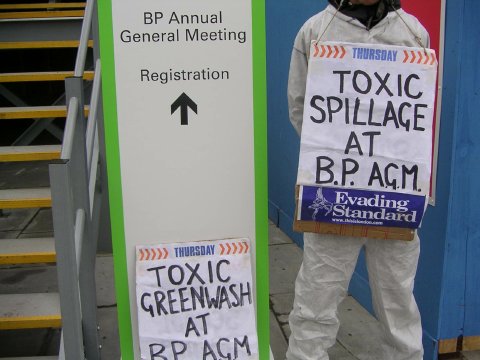 700 green 'BP in the dock: the charges' leaflets were distributed to predominantly supportive passers-by; (see text below). Banners reading 'Oil Festival Hall' and 'Toxic Greenwash Hazard', one highlighting the public money pumped into the Baku Ceyhan pipeline and one highlighting BP's role in the assassination of a Colombian activist, were all on display. Pretty much anyone with half a plan to raise their concerns about BP outside the meeting was searched, with one Greenwash Guerrilla being searched twice for daring to leave and return to an invisible police-designated 'protest area'.

BP's pre-meeting blurb stated, illegally, that 'We do not permit entry to persons whose conduct, behaviour or general demeanour may interfere with the good order of the meeting.' At least two shareholders were refused entry on these grounds, the second being accompanied by a BBC World Service business correspondent who witnessed the whole charade and featured a clip on that evening's business report, (

By all accounts the meeting itself ran depressingly smoothly. London Rising Tide has focussed some of its efforts for the time being on pressuring the Oil Festival Hall to refuse to have BP back once its renovations are complete, as well as running 'Art Not Oil 2005' alongside BP's Portrait Award (www.artnotoil.org.uk & www.nationalpetroleumgallery.org.uk). Also, the Baku Ceyhan Campaign (www.baku.org) has pledged to keep a searchlight planted firmly for the next five years on BP's 1-million-barrels-of-oil-per-day pipeline, the sort of determined, long-term attention that the company would love to live without.